Brazil is experiencing an alarming scenario of increased hunger. A study by the Brazilian Research Network on Sovereignty and Food and Nutritional Security (PenSSAN Network) shows that, currently, in Brazil there are about 19 million people suffering from hunger. In addition to these, another 43 million do not have full access to food.

As the public authorities cannot cope with the situation, whether due to incapacity or inefficiency or even lack of interest, the solidarity and community kitchens took on the task. They are assembled by social movements, independent organizations and organized communities.

In Porto Alegre, there are actions of this type, for example, in Grande Cruzeiro and in the Coletivo Multiplicidade project, which has several community kitchens distributed throughout the city. There is also the NGO Misturai, which delivers hot food to needy communities and people on the streets and has already distributed more than 170,000 meals.

In Brazil, the Movement of Landless Rural Workers (MST) has already donated six thousand tons of food and one million lunchboxes. The Small Farmers Movement (MPA) also joined the task force. Food is delivered in the form of food baskets or prepared and delivered in hot tubs. In addition, kitchens have become a space for welcoming and reorganizing grassroots work in communities.

Brasil de Fato RS sought contact with some of these initiatives to demonstrate how this challenge has been.

At Lomba, Marta is a nice person when it’s time to get the hot one

The kitchens have been in existence since the beginning of the pandemic, in March 2020, delivering 1,200 meals a week / Photo: Maiara Rauber

In the East zone, the region of Lomba do Pinheiro is one of the most populous (62,000 inhabitants) and poorest in the state capital. There, nine solidary community kitchens serve ten communities in the region.

“The kitchen is very important for people in this difficult time. You see houses there with eight people. The community is very coquettish on the day of going to pick it up, because everything helps in this difficulty”, says Marta Jurema Lima Oliveira, 53, mother of four and one of the benefited residents.

::BdF Explains | Why is hunger growing while agribusiness breaks records?::

“A little bit of one is a lot of all”

Isabel Adriana Klein, who helps coordinate the activities and is a resident of the Santo Antônio community, explains that the kitchens are organized by centers, where volunteers work by preparing food. In addition, there is a specific nucleus for the task of collecting and distributing food, clothing and shoes.

The kitchens have been in existence since the beginning of the pandemic, in March 2020, preparing different foods on different days of the week, totaling 1.2 thousand meals a week. Isabel notices that the continuity of the work is only possible due to the support of society with donations and volunteer work.

“We have a motto that is ‘a little bit of one is a lot of all’. This works within the community. She manages to look at her neighbor with a look of solidarity”, he comments. 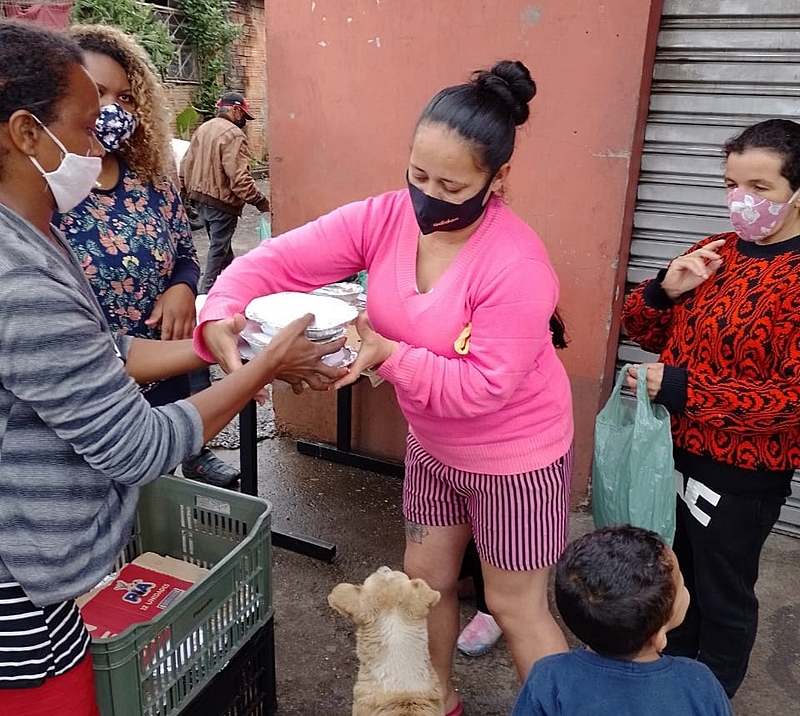 Like Isabel, Zailde Silva coordinates one of the kitchens in the region. A local resident for 45 years, she has been dedicated to community actions for more than 20 years. She works in the first kitchen that was installed by the Rio Grande do Sul Committee to Combat Hunger and Against the Lomba do Pinheiro Virus. He says that he had the habit of preparing every year, in winter, warmer food for people in difficult situations.

“With the arrival of the pandemic, we were bringing ready-to-eat food from the Igreja da Paz. So, I suggested to our group that each community should organize itself and that the Rio Grande do Sul Committee for Combating Hunger would provide support,” he explains.

::Homeless and without food: in the capital of Brazil, only donations save families from hunger::

In Azenha, a new life for an urban void

It was September 26 when the Homeless Workers Movement (MTST/RS) occupied a Union property in the Azenha neighborhood, in Porto Alegre. The building had been abandoned for two decades. The Azenha Solidarity Kitchen was created there, which, in 18 days, distributed more than three thousand lunchboxes.

The day after the occupation, the federal government asked for the repossession. Federal Judge Ana Maria Wickert Theisen accepted the request and the kitchen was evicted on the 13th of this month. The property occupied by MTST was auctioned on the same day. 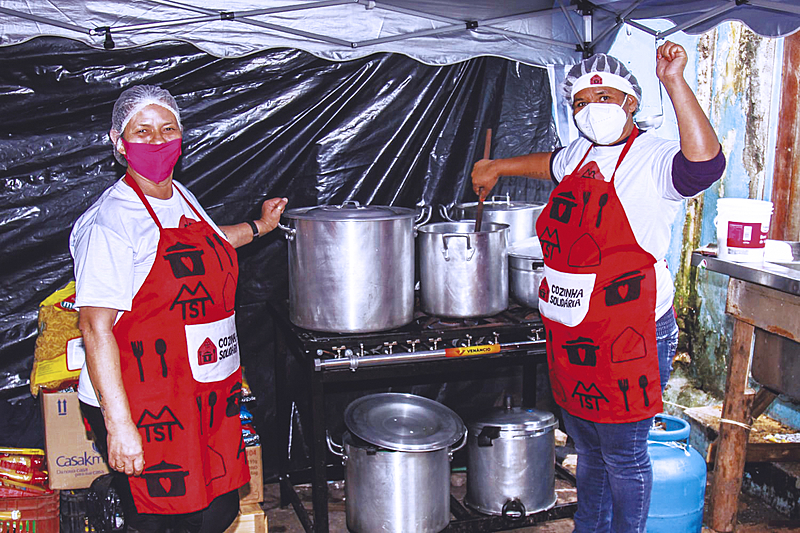 “We’ll cook on the corner if necessary”

“Hunger is knocking on everyone’s door, workers and especially homeless people. What we absolutely cannot do is retreat from the fight against hunger”, says Juliana Ferreira da Mota, one of the kitchen coordinators. “We’ll go out cooking on the corner if necessary, but people won’t go without food for a single day”, he reinforces.

For her, “to guide hunger in a country that already has 55% of people who have experienced some degree of food insecurity is urgent”. Juliana notes that “in addition to the lunch box, it is a space for popular organization. People talk here, they bring demands to the movement”.

A homeless person, Alexandre da Silva, known as Portuguese, 50 years old, is one of several people who have benefited from solidary cuisine.

“It’s a very interesting job for society. Sometimes there is no food for the residents [de rua] eat. [Além disso] the brigade removes the belongings of the residents who are under the viaducts”, says he, who is also a member of the National Movement for the Street Population (MNPR). 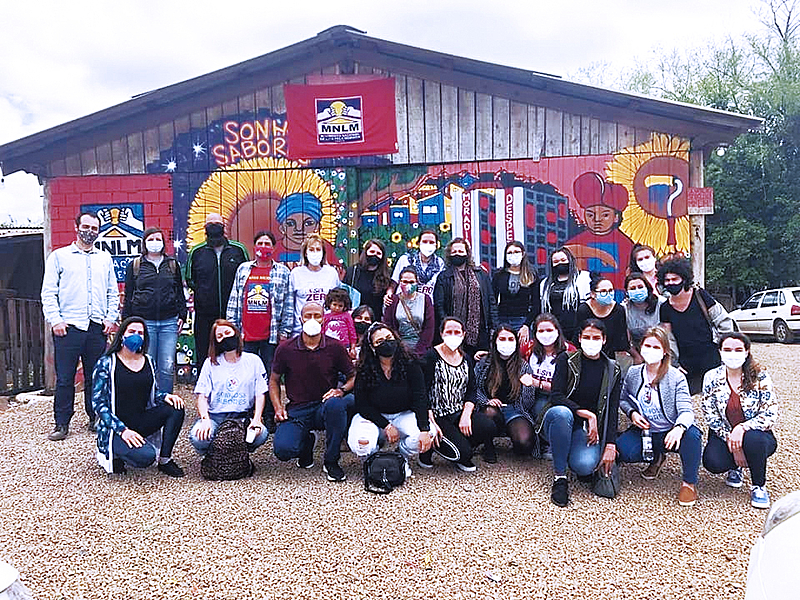 MNLM works in the São Léo Solidarity Network, with the Missionaries of Christ the Resuscitado, from Unisinos, and leaders from 15 communities / Photo: MNLM São Leopoldo

In São Leopoldo, in the Metropolitan Region, the reality of hunger was evident in the pandemic. This is what commented Cristiano Schumacher and Karina Kamillo (both from the National Movement for the Struggle for Housing – MNLM), together with Marilene Maia, from the University of Vale do Rio dos Sinos (Unisinos). Together, the three showed a little of the municipality’s experiences of solidarity.

In the city, the MNLM operates in the Solidarity Network São Léo, together with the Missionaries of Christ the Resuscitado, from Unisinos, and leaders from 15 communities. In these places, there are squatters and urban settlements, and the Network is involved in food security and hunger-fighting activities.

The work takes place along three lines: community kitchens, community gardens and the distribution of food baskets. This last axis even got the support of the local city hall, which buys food from family farming and passes it on to be distributed in the neighborhoods. Thus, throughout the pandemic, more than 40 thousand baskets have been distributed.

As for the solidarity kitchens, the three activists say that they already existed in the process of fighting poverty in São Leopoldo. However, a redoubled effort was needed in view of the challenges of the pandemic.

They consider that they will face “a period of many difficulties with a serious economic and social crisis added to a fascist government”. In the understanding of the three, “popular movements and civil society organizations committed to overcoming hunger and poverty must think about survival strategies and autonomy for the communities in their territories”. 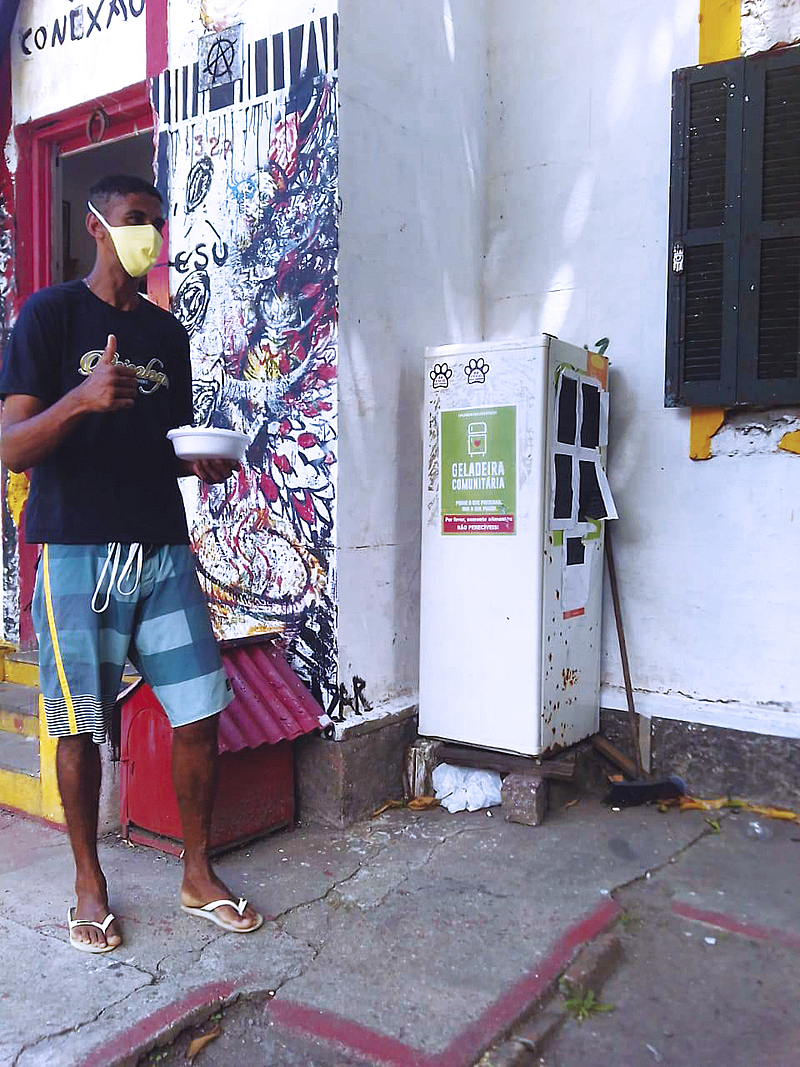 The Canto de Conexão occupation is located in Pelotas, in the southern half of the state. The building they occupy had been abandoned for over a decade. In 2017, a group of students and residents settled there.

According to Giovani Lessa, one of the occupants, the place was a garbage dump and was in terrible condition. After renovations carried out by the residents themselves, the place gained a new face. In a short time, residents began to recognize themselves as an “Urban Kilombo”, just like K.

A cultural center arose there. In the pandemic, with the impossibility of movement of people, the focus turned to actions to fight hunger. Linked with unions, including the teachers and technical-administrative workers at the Federal University of Pelotas (UFPel), the group collects food and prepares meals to be delivered mainly to the poor population of the port region and its surroundings.

40 hot items are served every Sunday

In the newspaper that the occupation started to publish, they narrate that “with the pandemic we saw many people having their lives changed, as well as our own. In this process of having to protect oneself and, at the same time, having to be on the street seeking survival, we realized the difficulty and, in our way, even with few resources, we tried to help”.

Currently, Canto da Conexão serves 40 hot drinks every Sunday, together with the Parceiros na Caridade project. In addition, they highlight the help of people from the terreiro, practitioners of African-based religions, who often collect food to be donated to the project.