November 17th has a significant weight for Peronist militancy in Argentina. It was the day on which, in 1972, the population was prevented by 35,000 Army soldiers from reaching Ezeiza airport to receive the then-exiled General Juan Domingo Perón, who was returning to the country after 17 years. This Thursday (17th), the mobilization was repeated, but with a new element: the mark of a new stage in the government of Alberto Fernández after the legislative elections.

The act concentrated militants in Plaza de Mayo since 3 pm, counting with organizations from the Peronist base, such as Movimento Evita, La Cámpora and the trade union centrals Central de Trabalhadores de Argentina (CTA) and the General Confederation of Labor (CGT), which convened the act , discussed in a meeting before the election with President Fernández.

On a stage set up in front of the Casa Rosada, Alberto Fernández spoke alone, still without the presence of Vice President Cristina Kirchner, who is still at rest after the surgery. “The triumph is not winning, but never giving up,” he said.

The phrase refers to the defeat at the ballot boxes of his coalition, the Frente de Todos (FdT), last Sunday: in numbers, he lost to Juntos pelaChange (JxC), the right-wing coalition of former president Mauricio Macri; but politically, the expression of votes was a sign of life in popular support for the government. Over the past few days, opposition forces, and mainly through the mainstream media, have clearly reinforced how much the governing coalition had lost and that, in other words, it would have nothing to celebrate.

Newspapers from major Argentine broadcasters demanded a defeatist posture on the part of the government. / Reproduction

Overview of the legislative election

Despite having won in the number of votes last Sunday, the distance between the JxC and the FdT was smaller than indicated in the September previews, which is explained by the greater participation of the electoral pattern and by the economic and social measures of the relaunch of the government, which said it listened to the message from the polls.

Of the 127 seats renewed in the Chamber of Deputies, the Peronist coalition lost two seats, but it still forms a majority, with 118 legislators. JxC kept the same number, with 116.

The governing coalition guaranteed the permanence of the presidency of the Chamber of Deputies with Sergio Massa, but should show political strength to negotiate with the other coalitions and guarantee a quorum to deal with the agendas.

Another result of that election was the entry of Avanza Libertad, with five legislators in the House. The new coalition is the expression of the Argentine ultra-right, which enters the scene with the anti-political discourse and headed by economist Javier Milei.

“May the last be the first”

“The ruling classes in Latin America do not understand the joy of the people”, said, on the same morning of the event, the national deputy for FdT and secretary general of the CGT Hugo Yaski, to the Brazil in fact.

Yaski recognizes that a large part of the population that followed the government at the polls and in Plaza de Mayo on Wednesday are precisely the most neglected, and that they are directly suffering from the economic crisis established by the debt to the International Monetary Fund (IMF) and the pandemic.

“They are workers, summoned by the union movements; men and women who do not have a steady job, people who depend on subsidies, who have children who are fed thanks to popular restaurants in schools or neighborhoods. These people accompany the government, being aware of the crisis, not just the pandemic, but the crisis that Macri’s neoliberal government left behind,” he says. “That is why it is important that these sectors mobilize, because it is a demonstration that the Argentine people do not lower their arms.”

One of the president’s candidacy mottos is to fight for “the last to be first”. It was in this tone that Fernández spoke on the Day of Militancy, highlighting the nine growth points of the economy this year and that salaries will surpass inflation, which reached 41.8% until October this year.

“We still have a lot of battle ahead: the debt, definitively facing the price setters, who every day raise prices to the detriment of the population,” continued Fernández. “We must control them and say ‘enough’. We cannot live in a country where some earn so much and millions fall into poverty.”

This should be the axis of the Frente de Todos government over the next two years, betting heavily on negotiating terms for debt payment with the IMF.

Deputy Hugo Yaski highlights, precisely, the focus on economic measures. “The government has a great challenge due to the increase in prices and inflation. They must announce actions and public policies to put a brake on this increase, because yes, it is important to increase salaries and retirement and end unemployment, but if they increase again the prices, we were stuck in the same place”, he says. “Thus, the government faces these two themes simultaneously, and also a third one, which is the need to generate jobs.” 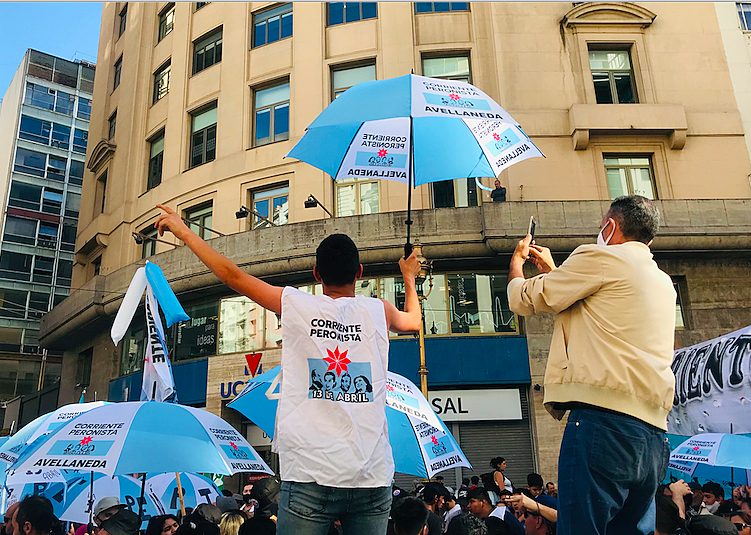 Days before the act, there was talk about the composition of the stage, in the search for the “photo of equality”. Finally, the president spoke alone and was the only one to be given the floor, in a speech that lasted about 30 minutes.

With an effusive audience, applause and chants amid strong phrases and promises of more social measures, the union of organizations from the Albertist and Kirchnerist wings and the atmosphere of celebration resulted in the mobilization.

In this last point, the fact that the population returns to the streets in Argentina after more than a year of impediment due to the coronavirus stands out. Thus, the commemoration also gained the aura of militancy returning to its place.