Between the beginning of this year and the month of August, the number of people who used their homes as collateral to take out loans rose 46% in Brazil, according to data from the Brazilian Association of Real Estate Credit and Savings Entities (Abecip).

Faced with the crisis, the modality, which allows for higher loans, with lower interest rates and longer terms, increasingly attracts the population. In a country that has historically viewed real estate as a symbol of stability, rising demand masks a significant cultural shift.

:: Indebtedness of families reaches the highest level in the last 10 years ::

Placing at stake the part of heritage that has always been considered the safest is often the last resort of citizens.

There are already indications from credit companies showing that an important part of those who choose this option, called Home Equity, seeks to pay off debts that already exist.

According to data passed on by the company Creditas fintech for a report in Jornal Extra, in Rio de Janeiro the increase in demand for the modality was 118%. The rate of people looking for money to pay debts is 25%.

It is no surprise that the upward movement of the Home Equity happen at a time of overindebtedness of the Brazilian population.

According to information from the Central Bank, the indebtedness of Brazilians and Brazilians, in June, reached more than 55% of the annual income.

What we have, right now, is that how desperate people and companies are

Figures from the National Confederation of Commerce show that, in September, the total number of people with debts to pay off reached 74%. More than 25% were late on the installments. This includes post-dated check, credit card, overdraft, store card, payroll-deductible loan, personal loan, car and home loan.

:: “People are no longer able to pay rent”, says resident of the largest occupation in Paraná ::

Economist and professor at the Federal University of ABC, Beatriz Mioto, says that the scenario is yet another element of Brazil’s negative economic situation.

“This idea of ​​a debt over another debt – you get into debt to pay off a debt that already existed – shows the depth of this crisis, which everyone insists on is only the pandemic, but it isn’t. It comes from before”, he says. .

Beatriz considers that it is necessary to look at the reality of loans with real estate as collateral, taking into account the segmentation of Brazilian society.

A considerable part of the population does not have their own and paid for housing. This already limits the scope of the modality. The risk is present in the middle class who managed to access this type of good and who have been feeling the crisis in their skin for some time.

Daniel Negreiros Conceição, an economist at the Federal University of Rio de Janeiro (UFRJ) also perceives the relationship between the crisis and the increase in credit taking.

The bank, which is a state-owned company and should be of help to the citizen, treated me as if I were a normal private bank

“What we have, right now, is that as people and companies are desperate, they have seen their incomes and revenues collapse, they are looking for any way to keep breathing. Credit becomes an alternative. The problem is that it is not a sustainable solution, neither for them nor for the economy in general”, he says.

As there is no sign of consistent improvement in household income and in the country’s situation, loans offer even more risks. Silvio Saldanha, president of the Association of Borrowers and Residents of Minas Gerais (AMM), points out that in an unbalanced economic scenario like Brazil’s and without absolute rigidity in family planning, the modality is “very dangerous”.

He explains that this type of operation is supported by the same law that deals with fiduciary alienation. “It means that the bank lends the money, takes the guarantee and, if you delay three or more installments, the bank can enforce this debt, put the property up for auction. If there is no buyer, this property is permanently for the bank. You lose the property and lose what you paid”. 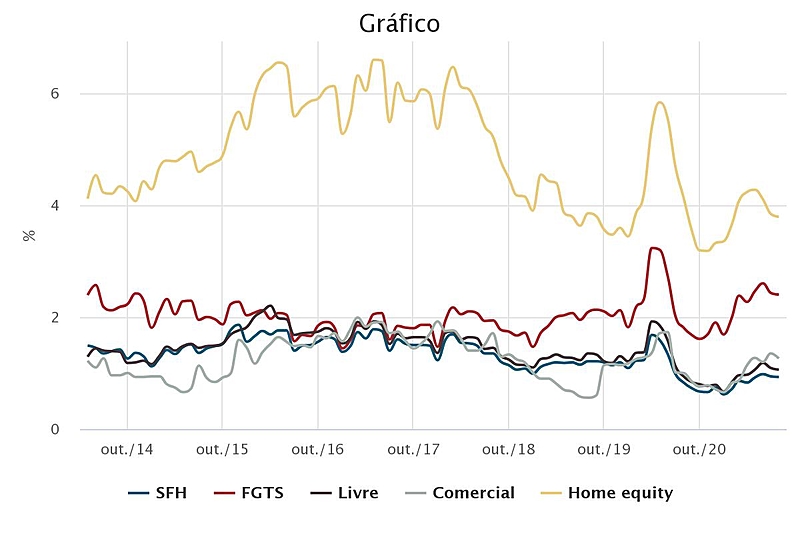 Precisely what seemed like a solution to pay off a debt led seller André Arlindo Santana to take out a loan using the house he lived in as collateral, in 2014. He was attracted by the interest conditions and carried out the operation by Caixa Econômica Federal.

According to André, even before getting the loan, the bureaucratic costs of the notary office had practically nullified the advantage of low rates. “It is a rate that is a little illusory”, he says.

The seller says that he has not received any guidance about the loan. “The bank, which is a state-owned company and should be of help to the citizen, treated me as if I were a normal private bank. The service was to sell the product. I, as a seller, always explained to my customers what it was necessary to do. the right account of what you can pay. You cannot exceed 30% of net income. I never heard that from the bank at any time.”

André managed to repay the loan on time until last year, but with the pandemic he lost his job and was unable to pay the debt, “Caixa, without any ceremony, took over the property. It doesn’t give me a negotiation option and I I had to go to court to be able to show them why I couldn’t pay anymore. I took out the loan in 2014, I paid until October 2020 and it’s as if I hadn’t paid anything.”

With this experience, the seller highlights the risks of the modality. “The situation of Brazilians is historic. It is really difficult for a worker to be able to make a nest egg, manage to maintain a standard of living and improve it. To make improvements we have to make a lot more effort and venture out with some financial help, which was my case, but I recommend that people avoid this modality if they are not sure they will be able to pay. Banks turn their backs on us,” he warns.

After 26 years of work, the distributor who worked with him decided to terminate the contract. With the assets divided between three partners, the family decided to seek the loan to keep the business operating and not fire the team of more than 60 people.

Renan says that he also did not receive any kind of guidance from the bank, “What I have to say to those who need a loan is to do it very well guided, don’t do it out of desperation. Mainly by placing a property. In our case, it was the worst experience I’ve ever had in my life. Even with the loan, my father had the company bankrupt and we couldn’t pay the installments.”

The situation had serious consequences for the health of Mr. Linoberques. “My father’s house was up for auction. Because of that, he had a stroke a year ago. It affected 75% of his brain, he lost his speech, had totally paralyzed the right side of his body and spent a week in the ICU. due to a loan. It was a horrible experience. Losing your housing that you battled, which was not won, was fought.

Economist Carlos Alberto Penha Filho, professor of economics at Universidade São Judas, explains that the growth of loans with real estate as collateral has an incentive from the Central Bank.

“One of the Central Bank’s priorities is to leverage this type of operation. It is the economic policy agenda to release this type of credit. In a fragile Brazilian economy, with a series of structural deficiencies, this could pose an enormous risk to families “, he points out.

According to him, “this is a form of economic stimulus via debt. It is something that does not only happen in Brazil and ends up involving how the capitalist system works today. It is an attempt to further expand the indebtedness capacity of families, at the risk of from any economic change, you have these families evicted and the property goes into the hands of the banks. Because for the bank it is very safe from the moment you guarantee your property on the loan.”

Daniel Negreiros Conceição, from UFRJ sees the growth of Home Equity with concern.

“What we are seeing is one more instrument of indebtedness for the population and companies so that banks can find other ways to gain from these activities. This is the big point. The bank is not concerned with the well-being of the individual who is getting into debt. “.

For Beatriz Mioto, it is necessary to keep in mind that indebtedness is a very strong aspect of social control. “What in fact structurally changes an economy is long-term investment, credit of a different nature. This credit will not be able to pull Brazil out of the hole. It is not an absolute fallacy, we have seen this in other moments in history, credit is essential to expand the horizon of consumption and production, but it is very short-lived”.

To the workers who are considering taking out a loan, Silvio Saldanha, from AMM, warns: “this is not the time to inflate the budget. Have you paid off an appointment? You can even start another one, but don’t inflate the budget if you don’t have good planning and organization at the tip of the pencil. The balance is beautiful, but then to pay with your property – everyone knows how much each brick, dream and sacrifice cost – to deliver in three open installments is very painful”, he concludes.