It was cold on Sunday night (17) in Atibaia, in the interior of São Paulo. Still, app deliverers gathered in front of the town’s Mc’Donalds.

Hanging on the sign, banners announced the strike for better working conditions, which began on Friday (15). on top of bags on the ground, food donations to guarantee sustenance during the short days. The deliverymen say they will continue without driving until they have their claims answered.

Among the demands of the strike are the increase in promotions and the minimum fee for collection (which is R$5.31), the end of two or more deliveries per race and also the end of account suspensions made without justification.

Atibaia is the seventh city in a wave of brakes that have been happening in the month of October and, at the moment, it is the only one that maintains the stoppage. With varying periods of duration – from one to eight days – the delivery strikes against delivery apps took place in Paulínia (SP), Jundiaí (SP), Maceió (AL), São Carlos (SP), Bauru (SP) and Niterói (RJ).

:: Delivery strikes against delivery apps are spreading and have lasted for days ::

Despite the unprecedented nature of the mobilizations, which spread to different cities and made food deliveries inoperative for several days in a row, there was still no contact by the app companies with the strikers.

Among them are iFood, the country’s largest delivery company and, therefore, the main target of the brakes; which also hit Uber Eats, Rappi, Box Delivery and James Delivery.

“They are seeing everything stopped and wanting to beat us because of fatigue, because they have greater purchasing power”, assesses João Marcos*, striker from Atibaia. “But we are going to succeed because we are not going to give in until iFood manifests itself”, he stresses.

Without saying whether it intends to make contact with the strikers, iFood informed the Brazil in fact that it “respects the constitutional and democratic right to demonstrate” and that the company “is permanently attentive to its entire ecosystem”.

This Monday afternoon (18), all stores on the iFood platform appear as closed in Atibaia (SP) due to the deliverymen’s strike / Print – iFood Platform

The wave of multi-day brakes

“The fight didn’t start here, it started there in São José,” one of Jundiaí’s deliverymen said in a video, on the sixth and final day of the strike in the city. He refers to the six-day break that took place in September in São José dos Campos (SP), the longest break so far, and which inspired the wave of strikes in October.

“We took the baton. Today it’s in Jundiaí, and we’re going to pass the baton”, he continues: “We punched iFood in the stomach. Now guys, you guys hit one in the face, and then in a national we’ll take down this giant who wants to take down our motoboy category”.

:: App deliverers claim that the strike is now for an indefinite period until they have answers ::

“This wave is happening because bikers have begun to open their eyes to the inequality that exists,” says João.

In front of the Mc’Donalds blockade in Atibaia, the delivery boy Jorge Luís* was gesturing, with his hand bandaged due to a motorcycle accident during his service, while describing the importance of strikes spreading through the municipalities. 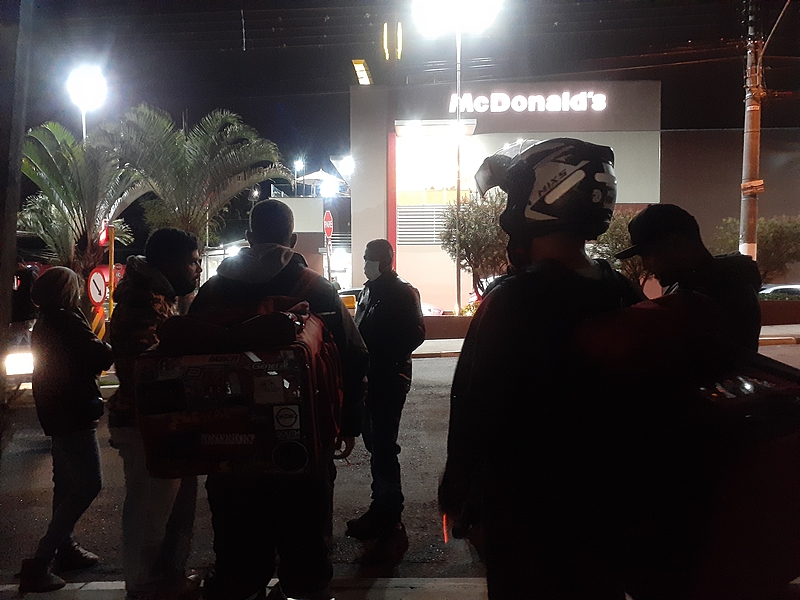 “What we are doing is not for me or for others, it is in search of improvement for everyone”, explains Jorge. “So we want all the municipalities where they are going through the same situation that we deliverymen went through, to join us. Give your city a break, call the bikers, talk,” he summons.

“If we manage to stop in other cities, we will be able to make an impact and show iFood that things are not their way, that we also have to be valued”, explains Luciano Mota*.

“At the height of the pandemic, on the front line – in the sun, in the rain, on holiday, leaving the family – who was it? We bikers,” says Luan Borges*, who has worked as an iFood delivery person for three years. “What we are doing is just for our right, the demand for improvement”, he points out.

“Then the time has come. That we are already tired”, says Luan: “We are not going to surrender”.

* Names have been changed to preserve fonts.