Venezuela has also joined the global day of action for the legalization of abortion, celebrated since 1990 on September 28th. About 500 women from various states across the country gathered in Caracas to march from the city center to the National Assembly demanding a debate on the decriminalization of termination of pregnancy.

Venezuela’s Penal Code has four articles that penalize abortion. The procedure is only allowed if it represents an imminent risk to the pregnant woman’s life.

“We believe that the National Assembly and the country need to open this debate, face abortion as a public health issue and not a criminal issue. We don’t believe in penalty. These articles were written in 1915 and the penal code was reformed several times, but articles on abortion are not mentioned”, defended Daniella Inojosa, leader of the feminist movement Tinta Violeta, part of the Alba Movimentos articulation.

Illegal abortion is the third leading cause of female death in the country, according to human and reproductive rights organizations. In 2019, there was an average of 15 abortions daily, according to a survey by the Venezuela Association for Alternative Sexual Education (Avesa). Another study from 2020 shows that 9 out of 10 Venezuelans between 15 and 59 years old did not plan their pregnancy.

Official data are outdated. The last maternal mortality index published by the state is from 2013 and recognizes abortion as the cause of only 10% of deaths among women.

Although the Constitution enacted in 1999 identifies family planning services as a right and sex education as a cross-cutting aspect of basic education, in practice these rights are not guaranteed.

“That’s why this demonstration cries out not only to the Venezuelan State, but to society as a whole, to advance in three simultaneous things: comprehensive sexual education to decide, to get to know my body, my sexuality and my reproduction; second, having universal access to contraceptive methods, in a country that is experiencing an economic war and even with the effects of the pandemic, has become an almost impossible mission; thirdly, access to legal, safe, free and self-guided abortion”, defends Suzany González, director of the Center for Studies on Sexual and Reproductive Rights (Cedesex).

Approximately 70% of Venezuelans do not have access to contraceptive methods. With the economic crisis, the situation became even more serious. A box of contraceptive pills can cost around US$15 (R$81) and condoms around US$3 (R$16.20), when the current minimum wage is equivalent to US$2.5.

As of the pandemic, around 71% of Venezuelan women assured that it became even more difficult to access basic hygiene and reproductive health products, according to a 2020 study by Cedesex.

In the absence of a state structure, Venezuelan feminist collectives began to develop systems for welcoming and monitoring women. The Faldas R collective activated a telephone line to advise on contraceptive methods and safe abortion. In 2019, they received an average of three calls a day, with 46% of women seeking to terminate their pregnancy for economic reasons, with 62% claiming to have an income of zero to two minimum wages. 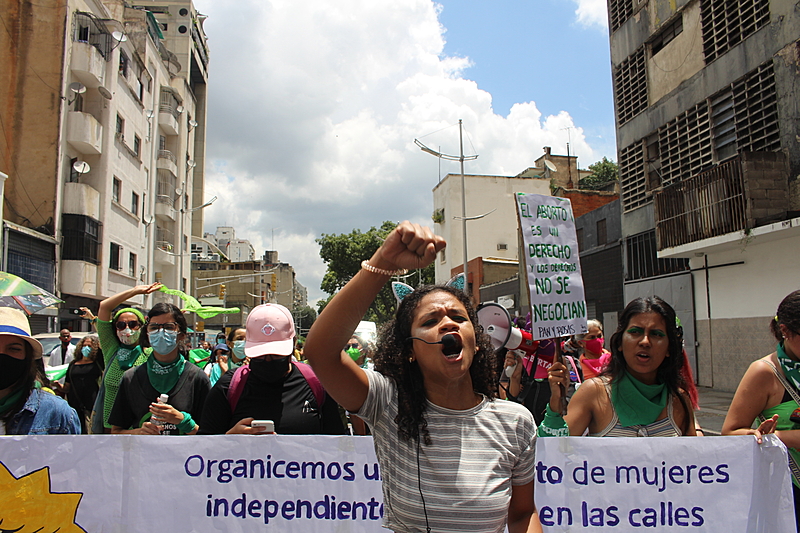 In the absence of official data, feminist movements started to carry out independent surveys on the sexual and reproductive health of Venezuelan women / Michele de Mello / Brasil de Fato

Venezuela also has one of the highest rates of teenage pregnancy, around 85.3%, according to the United Nations Population Fund.

Faced with the critical scenario, the feminist movement defends that the formalization of sex education in basic education is urgent, as well as the debate on the reform of the penal code.

“Especially addressing the social decriminalization of abortion, because the fact that we are banned from public debate, also prevents people from having real arguments about what abortion really represents in Venezuela. It is unethical that nowadays a child is forced to a maternity hospital if he has been raped”, defends Suzany González, who is also a militant of the Quinta Ola movement.

After the demonstration, five spokespersons for Venezuelan feminist movements were received by deputies in the National Assembly, who promised to take the debate to the plenary.

For feminist activists, the growth of religious fundamentalism in Venezuela is one of the factors that has prevented the country from making progress in the area of ​​sexual and reproductive rights, which is why the demonstration on September 28 emphasized the unity of broad sectors.

“For us, it is important that we also have here non-Chavista movements, because we believe that feminist issues must transcend political polarization. We are and have different positions and we respect each other. We know that we are capable of respecting each other in the struggle and in the agreement necessary to save women’s lives.”, concludes Daniella Inojosa.