Venezuela is preparing to return to face-to-face classes after nearly two years of pandemic and national quarantine. Nicolás Maduro’s government determined that the return to the classroom should start on October 25th, and for that, vaccination campaigns in schools and universities were intensified.

At the Central University of Venezuela (UCV), the country’s largest higher education institution, two large immunization days were held, coordinated by professors and students from the courses of medicine, nursing, nutrition and biomedicine.

University federations had published a joint letter in early 2021 calling for priority vaccination at universities.

“We wrote a document requesting vaccination not only for the medical school, but for the entire university community. After all, we all have equal rights. That was in March of this year and we are already in October”, says medical student and student counselor Yuni Ruiz.

The university community includes around 30,000 students and 10,800 workers. However, so far, around 1,500 people have been vaccinated. According to the administrative vice-rector, a good part of the institution’s servers and students had already been assisted by other vaccination programs in the state.

“What I want to emphasize is that, regardless of the numbers of vaccinated people, the university put all its efforts and medical and health resources at that time. We wanted the faculties of medicine to be part of this process, thus reducing bureaucracy, and depoliticizing, because it is not a political problem, it is a social problem that affects everyone, no matter how we think,” defends Amálio Belmonte Guzmán, administrative vice-rector of the UCV.

“We are more than 50 volunteers collaborating with the medical school to be able to carry out this journey. So this exercise is a kind of school, because we go out to exercise a part of our profession”, comments the medical student, Yuni Ruiz.

In two days of vaccination, around 1,500 Venezuelans were vaccinated at the UCV, in a universe of 40,000 people in the academic community / Michele de Mello / Brasil de Fato

At UCV, vaccination is done with the Chinese formula Sinopharm, the most abundant in the country. However, Venezuela also acquired Sputnik V and the Cuban Abdala formula, receiving a new batch of 900,000 doses last week.

With this, the vaccination campaign was open to all Venezuelans over 18 years of age. Starting this week, people can look for a health center to get immunized without prior appointment.

The goal of the Bolivarian government is to completely immunize about 70% of the population by the end of October to lift social isolation measures throughout the territory in the last two months of the year.

However, according to data from the World Health Organization (WHO), so far, only 20% of the Venezuelan population has completed the immunization cycle.

The country is going through a third wave of contagions of the new coronavirus, with an average of 10 thousand cases registered in the last week, a negative record for 2021. Since February 2020, Venezuela has accumulated 375,000 cases and 4,500 died from the disease, according to official data.

“We know that there is an increase in cases now, but we also know that if we vaccinate the response to the virus and the disease is much better, so our desire is to vaccinate the students. That in October the classes are in person? It’s gonna be hard. I believe that we must think in a progressive way, with small groups, in ventilated structures, maintaining all biosafety measures”, defends the dean of the UCV Faculty of Medicine, Emígdio Balda. 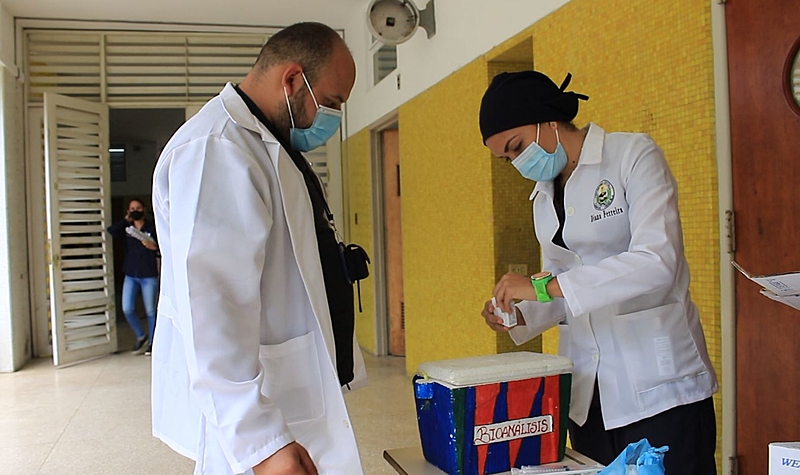 At the Central University of Venezuela, the Ministry of Health supplies the vaccines and workers and students organize the vaccination / Michele de Mello / Brasil de Fato

The announcement of the return of in-person classes also opened the debate in Venezuela on the conditions for resuming formal education. Some argue that hybrid education (online and face-to-face) is here to stay.

“The virus has arrived and it will not go away. We must get used to it and education has changed. Perhaps these master classes with 180, 200 students will no longer exist”, says Balda.

:: Venezuelans are divided between antagonistic proposals for economic recovery ::

The UCV University Council approved a gradual return, by groups, starting in October and the courses are already preparing a proposal for blended teaching.

On the other hand, there are those who argue that in-person classes, with the exchange between professors and students, is irreplaceable.

“Of course, many things have changed, but the substantial relationship between the teacher and the student, the face-to-face relationship, is unchangeable in relation to the content and what it represents, because we are human beings”, defends the vice-rector of UCV, Amálio Belmonte Guzmán. 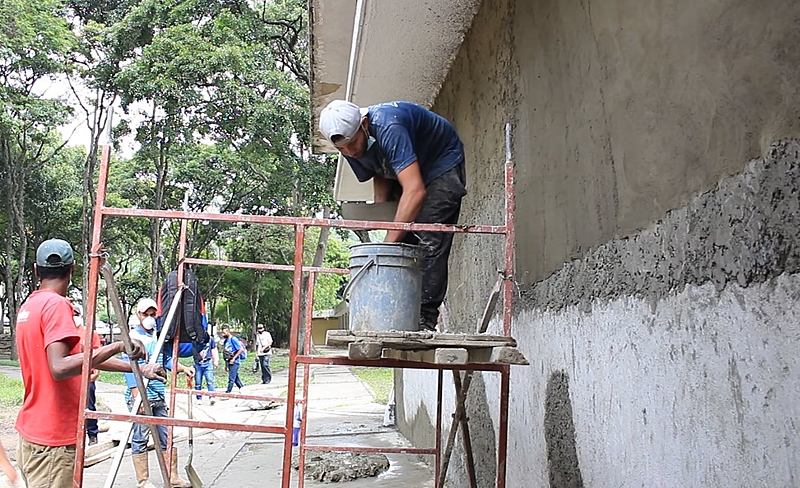 The vaccine is not enough

The pandemic has further driven young people away from universities. With 60% of the population with internet access and electricity supply problems, many students are unable to follow classes online.

The UCV student residence was also vacated to become a sanitary hotel with covid-19 patients, so around 150 people had to return to their hometowns, with no prospect of being able to return to the capital. In 2018, the dropout rate at the Central University was 30%, after the pandemic the expectation is that the figure could be even higher.

“We lost the opportunity to stay at the university, because most of the students had to dedicate themselves to work and this is the big dilemma for Venezuelan students now. Those who live in the interior must seek residence, those who work have to see how to balance their job with classes in the mid-afternoon… and most choose to eat rather than study”, says Ricardo Millán, a history student at UCV and member of the Confederation of Students of Venezuela (Confev).

Also read: Venezuelan government and opposition sign another partial agreement in 2nd round of negotiations

Faced with this scenario, the academic community makes it clear: it is not only necessary to be vaccinated to return to normal teaching.

For students, it is necessary to expand the permanence policies, with the reopening of the student residence, the university restaurant and increasing the value of the scholarships, which after the monetary conversion, is equivalent to 0.32 bolivars, reaching 1 bolivar for scholarships of monitoring.

For teachers, there is also a lack of structure to work and salary readjustments. A full professor at UCV receives a base salary of 46 bolivars, equivalent to about US$10, or R$54, considered one of the lowest in the region.

:: Dollarization in Venezuela: the street where everything costs a dollar ::

Therefore, the main requirement is a meeting of the Ministry of University Education with the unions of each category and the various student federations to establish a work agenda in areas other than the pandemic.

In August, the Executive also created a commission to recover the structures of the Central University of Venezuela, one of the first universities created in Latin America, in 1721, considered a historical and cultural heritage by UNESCO. According to Millán, in previous years, the students had already organized 20 days for the recovery of UCV spaces, voluntarily, with money raised by the unions.