Originating in the battles of verse and spoken poetry, Slam emerged in the Hip Hop culture in the 1980s, in Chicago, USA. It spread to the outskirts of the country and conquered different regions of the world. She arrived in Brazil only in 2008, through the voice of Roberta Estrela D’Alva, actress, slammer, music director, researcher and currently presenter of the youth TV program “Manos e Minas”, on TV Cultura. In Rio Grande do Sul, it gained strength from 2016.

It was with these themes, driven by the question of the representation of the black and peripheral people of where she lives, that Vanessa Mesquita, better known in the slammer universe as Tiatã, began to give rhythmic voice to her poetry, at the age of 11. She was the winner of the Gaucho Final of Slam 2021, played on September 20, and represented the state in the national final.

“Slam has always been more of a listening space than a speaking space for me”, says Tiatã / Foto: Arquivo Pessoal

Winner of the Gaúcha de Slam Final, Tiatã was born in Porto Alegre, in 1998. She is a poet, MC, social educator, executive producer and student of Public Relations. He started competing in Slam in 2018 and has been present in regional finals ever since. She is twice champion of Slam das Minas RS (2018, 2021), champion of Slam da Santa (2019) and champion of Slam Poetas Vivos (2020).

In an interview with Brasil de Fato RS, the slammer talks about what motivates her and the importance of art to give voice to the periphery. Check out:

Brasil de Fato RS – You were the winner of the Gaucho Final of Slam 2021, what did that victory mean to you?

Titan – This victory was the conclusion of a great cycle that I was already experiencing, it was very important because I believe it was at the right time. This year things went on a very natural course. I wasn’t going to compete in the slam this year, the first time I did it I got a place, I thought about giving up in the regional, but I chose to go because of the commitment I had made and especially in this pandemic year, because things are so much more difficult. I ended up winning the slam this year, so I believe it was more important for that, to signal me that each thing has its time, and to understand that, which is very difficult.

BdFRS – Part of hip hop culture, slam is a space of resistance in the form of poetry. What themes do you bring in your artistic expression?

Titan – Slam has always been more of a listening space than a speaking space for me. When I started attending the slam, before competing, I saw that they had agendas I wanted to talk about too. So everything I do, my poetry, is something I should be listening to, you know? I don’t think about talking to others, it’s always advice I have to listen to. So I talk a lot about loneliness, about how to be a black person in this racist society we live in, the ways of redemption and how we find ourselves in the middle of it. There are several subjects that I talk about more to myself than to anyone else.

I don’t do it thinking about talking to others, it’s always advice I have to listen

BdFRS – Can you reproduce for us the poetry with which you won the Gaucho Final of Slam 2021?

The poetry I won in the regional final is called Mariavilhosa in honor of my mother, and she is like that… (listen below)

BdFRS – You’ve been to several regional finals and been champion of some slams. Now came the national challenge. What changes? Are there differences in battles across the country?

Titan – As for the national, everything changes. I already had an experience in 2019 when I was representing RS in the Singulares tournament, which is a Slam das Minas, only national. I had already felt this difference in subjects, in approaching subjects due to territoriality, and each place has its specificity, so it’s very different.

But in this national, because it is mixed, we change strategies, everything changes. And there’s a lot of difference, you have flows characteristic, you have ways of speaking for the same subject.

BdFRS – Slams have proliferated in recent years in Brazil. What is this growth due to?

Titan – Slam has existed since 2008 in Brazil. His trajectory in RS dates back to 2016. I think we had an increase, but the decline comes as well. I believe that now because of the pandemic it must have increased much more. One of the subjects that Roberta Estrela D’Alva, who was the one who brought Slam to Brazil, spoke at this year’s national, is that the birthplace of Slam, which is the United States, is fighting to keep it alive, because it’s over, if extinguished.

Then you start thinking about this, while it has been proliferating, I think it has been seen more in schools, as a source of education, to reinforce the issue of literature with young people. But the street is no longer coming in this crescent. I think we are reaching a moment of stability.

Black and peripheral youth have always expressed themselves through art, both in rhyming battles and hip hop

I believe that with the end of the pandemic, things have everything to move forward and grow again. But we are going through a new phase and like everything else, we are reinventing ourselves, both as a poet, but also as an independent art organization.

BdFRS – What is the importance of artistic expression for peripheral and black youth?

Titan – Black and peripheral youth have always expressed themselves through art, both in rhyming battles and hip hop. The entire emergence of the Rap movement in Brazil was the need to find a space where we could talk. We’ve always been here and we always talk about it.

It’s not even a question of importance, but that’s what we know how to do, it’s our thing from the beginning. Because they never wanted to listen to us, they never gave us the opportunity to talk about our pains, our agendas. So we created our own environment, where we could hear each other, respect each other, have a welcoming place. And from that point on, things took a greater proportion, as did everything we created and do.

For us it means a lot. Just inside schools, having a place and showing them that art is a job, it’s not a hobby, art is a profession. Saying and showing that it is possible to make art, enjoy poetry, within what we do, show our young people that they have another opportunity in life and that they are very well received and welcome in these places. 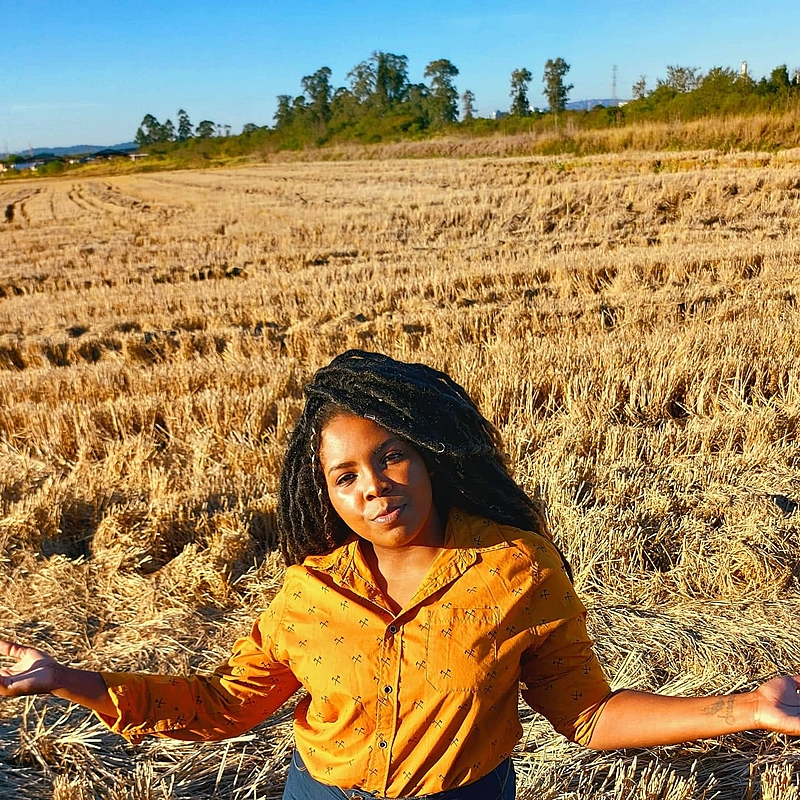 “So we created our own environment, where we could hear each other, respect each other, have a welcoming place” / Photo: Personal archive

BdFRS – How is the participation of women in slams today, what was it like and what needs to be improved?

Titan – I believe that not only within the slam, but in any other environment, the male presence has always been predominant. When I started, obviously we heard some things not only sexist, but also racist, a more veiled racism, in fact.

But the slam has always been a much more intolerant space with these issues. We didn’t clap our hands when we heard something that hurt someone. We always fight a lot about it, it became a space to talk about these things. So we always had this dialogue with these people, questioning why she was writing this, if she really agreed, if she had already thought of another perspective.

When the subject hurts the existence of another person, we were always very intolerant

So, as much as it is a space where you can talk about any subject, when it comes to hurting someone else’s existence, we’ve always been very intolerant, we’ve always had an approach with these people. more the question of actually listening, not just being there with your body present, but being there open and able to learn about things.