The Solidarity Kitchen of Azenha, which in the last 18 days occupied a space abandoned by the Union, distributing food to the vulnerable population of Porto Alegre, had to leave the place this Wednesday (13th).

During this time, the Kitchen, coordinated by the Movement of Homeless Workers (MTST), distributed more than three thousand lunchboxes. Despite the vacancy, the movement will continue with the delivery of food at another location in the Azenha, temporarily provided by the neighborhood.

Around 8:00 am this Wednesday, a Federal Police convoy arrived at Avenida Azenha, 1018, to comply with the order to repossess the property that belongs to the Federal Government and which had been abandoned for more than two decades.

The request for reinstatement, accepted by Judge Ana Maria Wickert Theisen, last week, took place the day after the occupation of the space by the MTST, which organized its 20th Solidarity Kitchen throughout the country.

As stated by one of the coordinators of the initiative, Juliana Ferreira Mota, the kitchen will continue to work. “What we absolutely cannot go back to is the fight against hunger. We have an agreement that we will not do. We’ll go out cooking on the corner if necessary, but people won’t go without food for a single day.”

In Porto Alegre, more than 160 thousand people are in a situation of social vulnerability. In the last year alone, the homeless population increased by 40%.

Since the beginning of its activities, on September 26, Cozinha has received support from various entities and social movements, political parties (PSOL, PT and PCdoB) and people with no connection to any movement, who have become project volunteers. The importance of the social function developed by the kitchen was recognized by the municipal and state executives, who visited the place. The movement hopes to get its own location next to the city hall.

Meeting with representatives of the movement on Monday (11), the deputy governor of Rio Grande do Sul, Ranolfo Vieira Júnior, signaled the availability of a new space for the MTST’s Solidarity Kitchen in the state capital.

According to him, the place will be PopRua RS, on Avenida Aureliano de Figueiredo Pinto, in the Praia de Belas neighborhood, starting on October 19th. The Movement, however, demands to remain in the Azenha neighborhood, a region with the largest number of homeless people and workers in need of help.

“We want to know if the money for this property will be allocated to the population or is it another one that will end up in offshore in tax havens while the people are hungry,” questioned Cláudia Ávila, coordinator and lawyer, during the vigil held this Tuesday (12).

According to the MTST, this Wednesday the auction for the sale of the area takes place. “The Union Patrimony Superintendent, who followed the Federal Police’s action this morning, said that the money from the sale will go to the Union treasury. But what will be done, in fact, with this money for the people? Will it go to a tax haven on the part of minister Paulo Guedes or will it be another billionaire bonus to the military?”, asked the organization in a statement.

The lunchboxes will continue to be delivered to the sidewalks on Avenida Azenha. Meanwhile, the movement is also following negotiations with the state government of Rio Grande do Sul in the search for a definitive space. 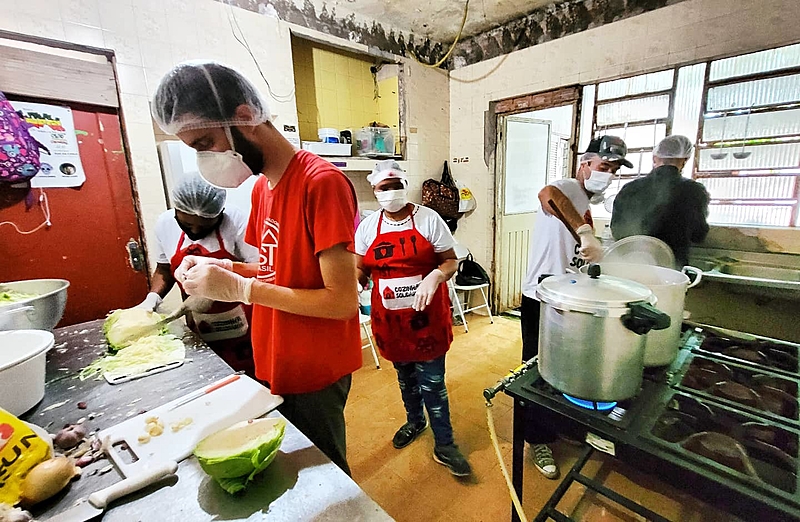 Kitchen this Wednesday already sheltered and preparing lunchboxes in a house provided for the time being / Photo: Alass Derivas | @derived journalism

Contribute to the initiative

Cozinha Solidária da Azenha accepts donations to keep up the daily work. The PIX key to contribute any value is: [email protected]