The demonstration that took place on September 7 in Vale do Anhangabaú, in São Paulo, brought together thousands of people and remained peaceful, contrary to the apprehension of both organizers and the police, concerned about the statements of confrontation by the President of the Republic in recent days.

The Institutional Observers, a group organized by the CDH (OAB-SP Human Rights Commission), registered only one arrest during the act. The event took place in the region of the São Bento subway station, next to Vale do Anhangabaú. E. ML was approached by the police and resisted the search, according to the coordinator of the group of lawyers working at the event, Arnobio Lopes Rocha. The police then arrested him.

::”I came to the street because fascism is there”: what moved left-wing activists on September 7th::

The demonstrator is autistic and was taken to the 8th DP, as informed by the lawyer of the HRC, Flávio Strauss, who accompanied him to the police station. The Public Defender’s Office was called upon by the group to follow up on the case and sent a defender to provide assistance on the spot. The young man was released after signing a detailed term, and an investigation was opened by the police.

Aside from this incident, what was seen was a peaceful demonstration from beginning to end, with time even for moments of humor, such as the appearance of a “tank” made of cardboard on a cart, releasing a lot of smoke through an “escape ” held aloft by one of the activists who played the satire. See below.

The same group of protesters took paper warplanes and circulated through the streets of downtown São Paulo in the afternoon. The action satirizes the recent parade of military vehicles in Brasília, attended by Bolsonaro, in which the Brazilian Navy carried an armored vehicle that drew attention due to the excess of smoke it expelled.

The group – which identifies itself only as “Action Group” – is formed by journalists, lawyers, philosophers and communicators, and has already carried out previous interventions in the city.

The collective’s first “anti-parade” toured the downtown streets in 2020 with banners and flags of Brazil in black and white. At the time, the tracks featured phrases such as “Genocidal State!” and “Dependency and Death”. The names of group members will not be published for security reasons.

::”Outside, Bolsonaro” and Grito dos Excluídos mobilize 200 cities against hunger and for democracy:: 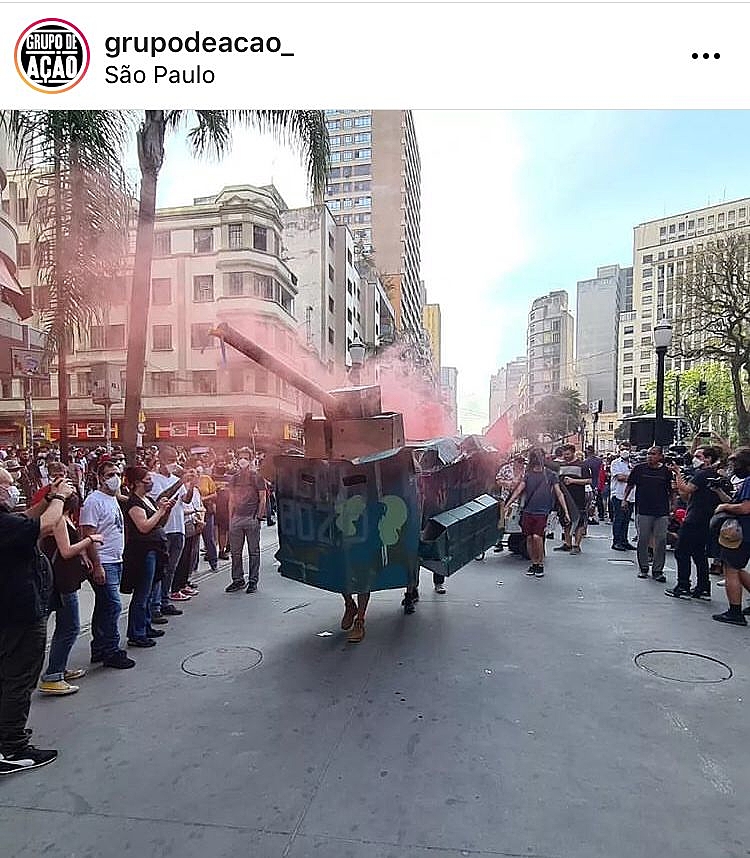