Last week, the main news portals in the country highlighted a message attributed to the Comando Vermelho (CV) demanding a reduction in fuel prices in Manaus (AM) within a week. Otherwise, the posts would be set on fire.

The supposed “save” – ​​as the messages originated at the top of criminal organizations are called – was published on Wednesday (27) on a social network by a man who would be the leader of CV, a Rio de Janeiro group that dominates drug trafficking in the capital Amazonas, one of the most violent in the country.

:: Militarization, war on drugs and extreme poverty explain conflicts in Manaus (AM) ::

Since then, prices have continued to skyrocket, with a liter of gasoline reaching R$7 in the metropolitan region of Manaus, without any violent action by the faction.

Experts heard by Brazil Fact they distrust the veracity of the message and warn: it can be a fake news useful to the process of militarization of public security in Amazonas, considered ineffective in fighting crime.

“It looks more like a fake save, which has happened a lot. There is no crime precedent for blowing up gas stations. These organizations do not have a practice of this degree of violence and spectacle”.

The analysis is by Fabio Candotti, professor of Social Sciences at the Federal University of Amazonas (UFAM). According to him, violent actions by Brazilian criminal groups tend to be directed at state authorities, not at the general population.

In the account of the researcher, who has monitored the activities of organized crime for 15 years, it would not be the first time that a threat falsely attributed to CV has left the population on alert.

“In June of this year, there was a ‘salvage’ from the Command saying that they were going to set fire to buses with children and elderly people inside. This does not make sense, also because the people who ride the buses are the relatives of the members of the factions”, he recalls.

:: Chaos in Amazonas: war between criminal faction and police adds to the tragedy of covid ::

Another student of urban crime, professor of Geography at the State University of Pará (UEPA) Aiala Couto, author of the book “The Geography of Crime in the Metropolis: from illegal networks to ‘perverse territorialization’ on the outskirts of Belém”, also distrusted the headlines that announced the threat.

“There is the possibility that some member of the group [Comando Vermelho] may be triggering this information in the wrong way as a way of trying to show approximation with the people, above all defending the interests of the population. And it could be very much a text fake‘”, he ponders

In a statement, Sindicombustiveis-AM, which represents businessmen in the sector, stated that it did not see the threat as true. The Public Security Department of Amazonas said it will not issue a position on the case.

On social networks, the supposed threat against the increase in fuel generated demonstrations in favor of the Comando Vermelho, making clear the popular dissatisfaction with the inability of the Jair Bolsonaro government (without a party) to control the price of inputs.

“At last, someone to defend us”, “If the rulers just want to steal, someone has to defend the workers” and “Bangit is having more consideration for the people than the rulers”: these were some of the reactions of registered netizens by Brazil in fact. 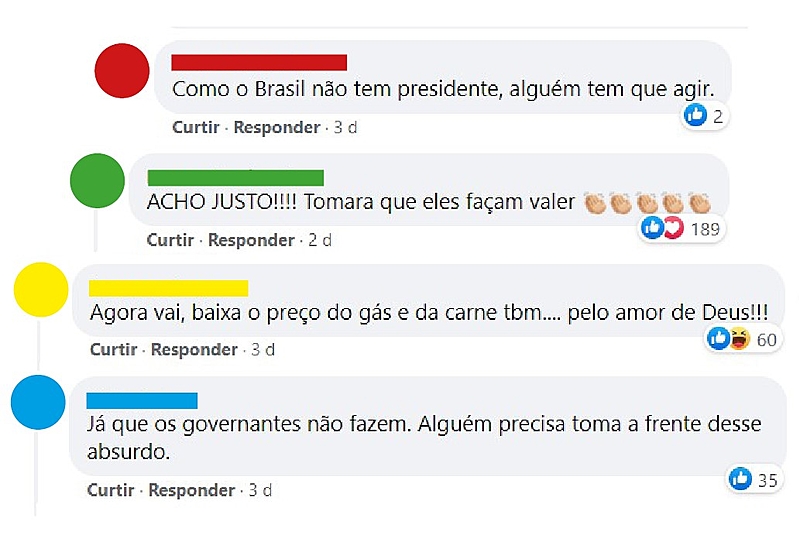 The “save” was released, criticism of President Jair Bolsonaro and demonstrations in support of the Comando Vermelho spread through social networks / Reproduction/Facebook

Candotti, however, discarded a CV strategy to gain popularity. To justify the position, he cites the attacks against police stations, schools, squares, public works and bank agencies triggered by the criminal organization in June this year in at least six cities in Amazonas.

“If in June, when no policeman died, we had the National Force coming to the city, imagine if they started to blow up gas stations? We were going to have the Army walking the streets of the city. So if that happened, whose interest is it? Who would gain from this?”, he asks.

Couto, on the other hand, does not rule out the possibility that the positive repercussions of the supposed threat could motivate the execution of similar actions, validating an even more violent response from the police.

:: “The price of gasoline today is a decision made by President Bolsonaro”, says an engineer at Petrobrás ::

“We must observe this critically so as not to mistakenly reproduce a headline that could even end up giving the idea that the group will actually take a more violent action in terms of trying to show strength, including spreading to other capitals”, he says. .

A member of the State Front for the Expulsion of Amazonas, Candotti also criticized the press coverage. For him, the space given to the case was disproportionate to its relevance, contributing to justify the escalation – already underway – of police repression in the suburbs.

“Police journalism has been problematized for over a century as a discourse that contributes to the discrimination of subaltern and racially marked groups, through the transformation of small events into big scandals and the reproduction of the police perspective”.

In 2018, journalist Wilson Lima (PSC) left the police show that he presented on TV A Crítica, an affiliate of Rede TV in Manaus, to occupy for the first time an elective position, that of governor of Amazonas.

:: Can you control the abuse of police programs on TV? Uruguayan law shows that yes ::

Promising to reduce crime based on repression, he was elected in the second round with almost 60% of the votes, ahead of Amazonino Mendes, an old acquaintance of the electorate for alternating in the positions of governor and mayor of Manaus since the 1980s.

After the 2019 massacre that left more than 50 prisoners dead at the Anísio Jobim Penitentiary Complex (Compaj) in Manaus, Lima imposed a new discipline regime as a way to limit the power of factions within prisons.

“Most of the arrested men are caged in their cells 22 hours a day. Every day, they are searched naked with lethal and less lethal weapons. During the visits, family members are being deeply humiliated”, describes Candotti.

But for the researcher, who follows cases of human rights violations in prisons, the backfire backfired. “And what did that produce? Initially, it was the unification around a single faction, the Comando Vermelho”, he explains.

“They unify in 2020 with the speech that the situation in prisons was much worse. On the other hand, we have complaints about how the administration incites disputes between factions within the prisons, which hit the streets”, he adds.

“Factions are not enemy number one”

Without speculating on the real authorship of the threat attributed to the CV against gas stations, Candotti prefers to denounce the negative effects of the militarization of public security in the state.

“We have a massive incarceration process that in 20 years could have affected more than 100,000 people in the city. Indirectly, counting the families, 200 or 300 thousand people. In other words, we may have a fifth of the city having gone through the experience of incarceration directly or indirectly”, he calculates.

Ironically, for Candotti, the same public agents who promote the militarization of public security, in many cases, are accused of involvement in serious illegalities.

In July of this year, a Federal Police (PF) investigation linked the Military Police colonel and then Amazonas Public Security Secretary, Louismar Bonates, to an extermination group.

At the time, Bonates denied the accusation, said that his life is “guided by ethics” and left office citing health reasons. In his place, a general, Carlos Alberto Mansur, took over.

In the same month, the intelligence secretary of the state government, delegate Samir Freire, was arrested along with three civil police officers, all accused of extorting R$ 18 million in gold from illegal miners.

The governor of Amazonas, Wilson Lima, became a defendant in September for participating in an alleged embezzlement of public money in the purchase of respirators for patients with Covid-19, a charge vehemently denied by the former host of a police program.

:: Governor of Amazonas becomes a defendant in the STJ after allegations of corruption during a pandemic ::

“From the point of view of those who live in the periphery, for many people, the most dangerous thing is the small robbers, who don’t have much to do with organized crime. At various times these criminal groups have played a leading role in pacification policies”, emphasizes Candotti .

“The discourse that demonizes the universe of drug trafficking and crime and that exaggerates the danger of these groups feeds the process of militarization of our lives, and not the militarization only against these groups”, continues the professor at UFAM.

In a statement, Governor Wilson Lima stated: “I never received any benefits as a result of measures I took as governor. The accusation is fragile and presents no evidence or indication that I committed any wrongdoing.

The criticisms present in this report were sent to the government of Amazonas, which had not sent a response until publication. O Brazil in fact failed to contact the defense of Samir Freire.