Little Iara is six years old and has recently written a book about the life of lions. This was the theme she chose to research from the Semillero Brasil extension project, at the University of Brasília (UnB), which promotes a process of investigation specific to childhood based on their curiosities and interests.

“When I’m a researcher, it’s really cool because I’ll know things I’ve never discovered. When I think something is like that, I find out that it’s something else,” says Iara in an interview with Brasil de Fato DF.

A fan of lions, Iara wanted to know where they live, what they eat and how they relate. Still in the literacy process, she had the help of her mother, Ana Vitória Piaggio, to write the text, based on her own ideas and discoveries along the way, which had the help of a teacher specializing in big cats.

She even drew illustrations for the book and cut out photographs to show different species of lions. The work will be released to the general public.

Iara shows the book she wrote about the life of lions, at the Encounter of Investigating Children, during the UnB University Week, in September. / Playback/Youtube

The name of the initiative, Semillero, is of Spanish origin and refers to the idea of ​​sowing, that is, sharing and multiplying. In this case, sow knowledge. The proposal has its origins in Colombia, where there are already thousands of semilleros, which are research groups formed by children and young people, housed in schools and universities across the country, and has also expanded to other countries, such as Chile. In Brazil, the project is developed by the Faculty of Education at UnB, under the coordination of Professor Fátima Vidal.

Since it started in 2015, Semillero Brasil has promoted a series of activities for teacher and student training and developed direct actions in some school communities in the Federal District.

One of the three pillars of the public university, alongside teaching and research, extension is university action with the external community, fundamental for social integration and transformation based on knowledge. Undergraduate student in Pedagogy and extensionist on the project, Lívia Martins works as a co-investigator at Semillero Brasil, and says that the project goes beyond encouraging research by children.

“We brought this term investigation. It’s something more playful than simply research. It’s about the ability to be amazed, to be enchanted by the discoveries. Investigation through investigation itself, for the children themselves to bring their own interests,” he says.

Elis, 8 years old, Iara’s sister, is also acting as a researcher in the project. She loves sleepovers, when she gets together with her friends and family to play and have fun. He likes it so much that he chose this theme in the investigation process. “I already know a lot about sleepovers. Now I’m going to make a video for my YouTube channel, which will be a virtual party at PKXD to show how,” he says. 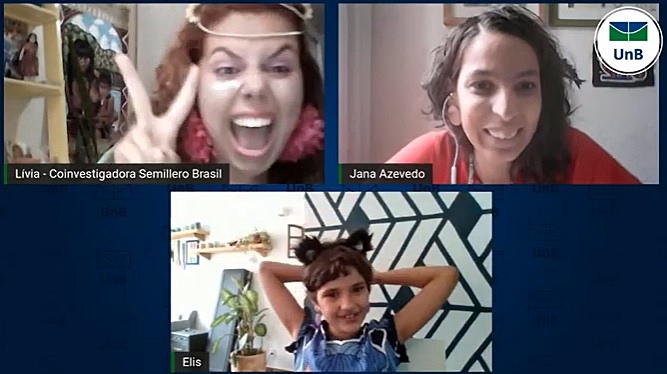 Elis, 8 years old, at the opening of the Encounter of Investigating Children, during the University Week of UnB, in September. / Playback/Youtube

PKXD is a children’s game application, which has become a fever among children, and allows you to customize virtual universes based on the users’ creativity.

Semillero Brasil has already worked in four educational spaces in the Federal District. In the early days of the project, the first experience took place at Escola Associativa Vivendo e Aprendendo – from the program’s monitors, who began to carry out research projects.

The initiative has also taken place at Escola Classe da 115 Norte, regarded as a reference in the public network, and at Instituto Azul Turquesa, which is a space for after-school hours that develops a series of complementary activities to stimulate children’s creativity. But it was at CAP, the Learning Community of Paranoá, that Semillero Brasil managed to expand its activities as a project of collective experiences.

Inaugurated in 2018, CAP’s proposal is to expand the pedagogical practice beyond the school walls. Instead of classrooms, there are learning spaces. Instead of a curriculum defined only by teachers, there are collective projects built to meet the reality of children.

“What I think is most fantastic about this is the work with territory and the recognition of non-formal knowledge. The grandmother will be able to contribute more than Einstein, depending on the topic of interest to the child. I believe that, based on the project, we manage to stimulate this curiosity and create an inverted relationship, based on the knowledge of the family, the territories”, points out Lívia Martins.

With the pandemic, Semillero Brasil’s in-person work was suspended and the project began to be developed virtually. Throughout August of this year, for example, the project promoted a work of collective experience involving about 20 children between 7 and 12 years old, with weekly virtual meetings.

The project also launched a ebook in which it details the four-step methodology of the investigative trails proposed for children. The first step is always to discover what the child’s question is, starting from the observation of what is around and inside each one of them.

The second step is to understand how and with whom you can get the answers to the question. This can include books, internet research and dialogue with steps of notorious knowledge.

In the project, these people of notorious knowledge consulted by the children are affectionately called know-it-alls or know-it-alls.

The next step is to “get your hands dirty”, actually investigate, talk to the know-it-all or know-it-all, take readings, walk the path. Finally, the fourth step is to celebrate, share the experience.

“Those who work in academia, in science, feel lonely. Often there is competition. But every path you took to reach this discovery, you drank from the source of many other people, of a lot of knowledge. We have been making these moments. of celebration in research groups. As much as children have unique interests, this moment is not to say that it is over, but to remember that we need to celebrate and share knowledge with people in our community, in our family. knowledge alone is useless, it needs to transform the community”, emphasizes Lívia Martins.