Between November 3rd and 5th, 2667 families from eight municipalities in Paraná will receive 80 tons of food produced by peasants from Agrarian Reform and Family Farming areas. The action is carried out by the Center for Sustainable Development and Training in Agroecology (Ceagro) in partnership with the Banco do Brasil Foundation, through the “Brasileiros pelo Brasil” project.

The public served by the action is part of the 116.8 million people who live in a situation of food insecurity in Brazil, without enough to eat or in a situation of hunger – according to a survey by Rede Penssan (Brazilian Network for Research on Sovereignty and Security Food), December 2020.

“The pandemic contributed to aggravate the contradictions and historical problems of capitalist society, such as the lack of access to basic fundamental human rights such as access to housing, health, work and income and adequate and quality food. In the countryside and in the city, workers and the population living in a situation of social vulnerability feel the main effects of this structural crisis, which has worsened with the pandemic, poverty and hunger”, assesses Thaile Lopes, member of the coordination of Ceagro and agroecological producer of the Settlement 8 de Julho, in Laranjeiras do Sul.

Of the 80 tons, 20 tons are in nature and the other 60 agro-industrialized/processed. A bar soap for personal hygiene will also be delivered.

Bananas are produced by the Agroecology Group and the Association of Organic Rural Producers Nova Alternativa de Laranjal, and by the Filhos da Terra Association, by Antonina / Jaine Amorin/MST-PR

In all, 3,715 family farmers linked to agroecology groups, associations, cooperatives, agribusinesses destined food for the action. The baskets will have around 30 kilos each, with more than 70% of the items produced in an agroecological manner or in transition processes, without the use of pesticides and with fair labor relations and care for the environment.

Each item also symbolizes the efforts of peasant families to produce healthy food. Beans, for example, come directly from the Nova Alternativa Agroecology Group and Organic Rural Producers Association, in Laranjal, the Xaxim Community Rural Producers Association/Grupo Palmeirinha, in Palmital, and the Conquista Agroindustrial Cooperative for Production and Commercialization ( COPACON), located in the Eli Vive settlement, in Londrina.

:: Special | Hunger in Brazil: the struggle of Brazilian families to guarantee food on the table ::

In May 2020, Ceagro and Fundação BB had already shared 80 tons of food across the state (in 2 stages). Now, there will be 80 tons in just one step. 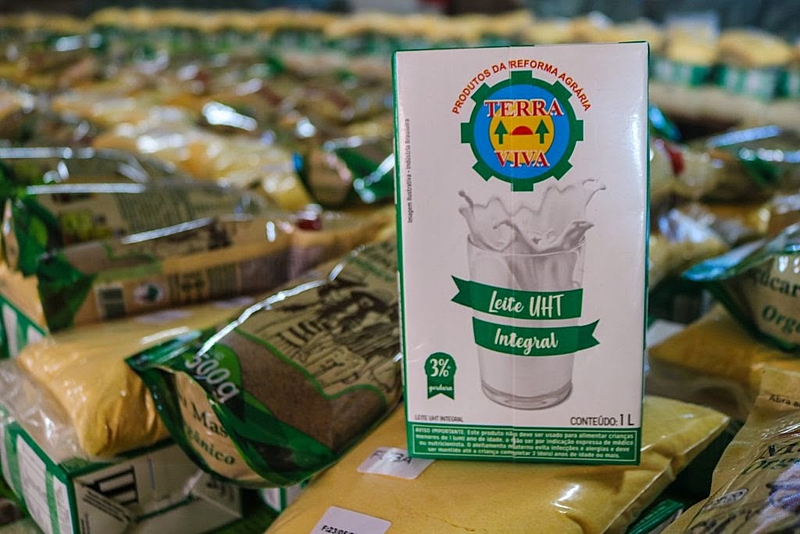 The only item coming from outside Paraná is whole milk, produced by the Regional Cooperative of Marketing of the Far West of Santa Catarina / Photo: Jane Amorin/MST-PR

Thaile Lopes explains that, in order to organize the campaign for the acquisition and donation of food in this current pandemic scenario, Ceagro took as its base the experience of popular movements, especially that of the Landless Rural Workers Movement (MST).

Since the beginning of the pandemic, the MST has carried out a campaign for the production, donation of food and lunchboxes, among other solidarity actions with the objective of alleviating the social effects of the structural crisis that was aggravated by the covid-19 pandemic.

:: Guardians of Creole seeds: a fight for self-sufficiency, flavor and knowledge ::

In all, more than 790 tons of food have been shared since April 2020 by Agrarian Reform families across Paraná. About 85,000 lunchboxes were also produced and shared in Curitiba and the metropolitan region by Coletivo Marmitas da Terra, coordinated by the MST.