In the months of July, August and early September, the Chico Mendes school, located in the Santa Elmira Settlement, in Hulha Negra, in the Campanha region of Rio Grande do Sul, developed a project for preservation and reforestation in the local community. 98 kits with 12 fruit tree seedlings were delivered to families of settlers participating in the initiative. It was named “Paulo Freire Tree Planting Roadmap”, a tribute to the master educator and his centenary.

The school’s activities were all planned with an environmental focus, in addition to the delivery of kits, there were also educational lives. The actions involved the entire community and had the presence of former students.

The seedlings were delivered by settlers from the Landless Rural Workers Movement (MST) from August 25th to September 3rd. The institution guided social distancing, use of masks and 70% alcohol gel when removing the combo from the trees.

The reforestation intention is a continuation of the environmental work that the school has been developing in partnership with Instituto Padre Josimo and Pampa Sul, since 2017 with the project of protected springs.

:: One hundred years ago, Paulo Freire was born: learn about the path of the patron of Brazilian education ::

The action aimed to acquire quality water for students. The first activity carried out was the planting of native seedlings in the vicinity of the school’s spring, which provided a connection with the reality experienced by the Sem Terrinha in the countryside.

In addition, in 2019, the MST’s National Plan was launched, “Planting trees, producing healthy food”, which aims to plant 100 million trees in 10 years, in Agrarian Reform territories and in the city. Which made the school become even more involved in preserving the environment.

“Relating to the planet”

As this initiative aims to extend the students’ ties with nature, it makes a sense of partnership with the ecosystem flourish. Cenira Hahn, the school’s educator, talks about how excited the students are to participate in the program. “We noticed the enthusiasm of the children involved as well as the families”, he explains.

According to Cenira, the project creates a closer link with the biosystem. Action is also a way to leave conventional teaching out of the classroom, which makes the pedagogical method more interesting. “The institute’s environmental projects are a way of relating to the planet and providing a breadth of learning, creating a social sense, contributing significantly to the taking of conscious actions in defense of the environment and the maintenance of life”, said the Landless.

According to the teacher, the Chico Mendes teaching center develops other plans with an environmental character, always seeking to encourage students by improving their school spaces for teaching and learning. “One of these projects is the seed pencil. It’s an ordinary pencil, but instead of an eraser on its top it has a capsule with a seed. So when the instrument is not good for writing, it gives life to a future tree,” tells the master.

Former students set an example to the children of settlers 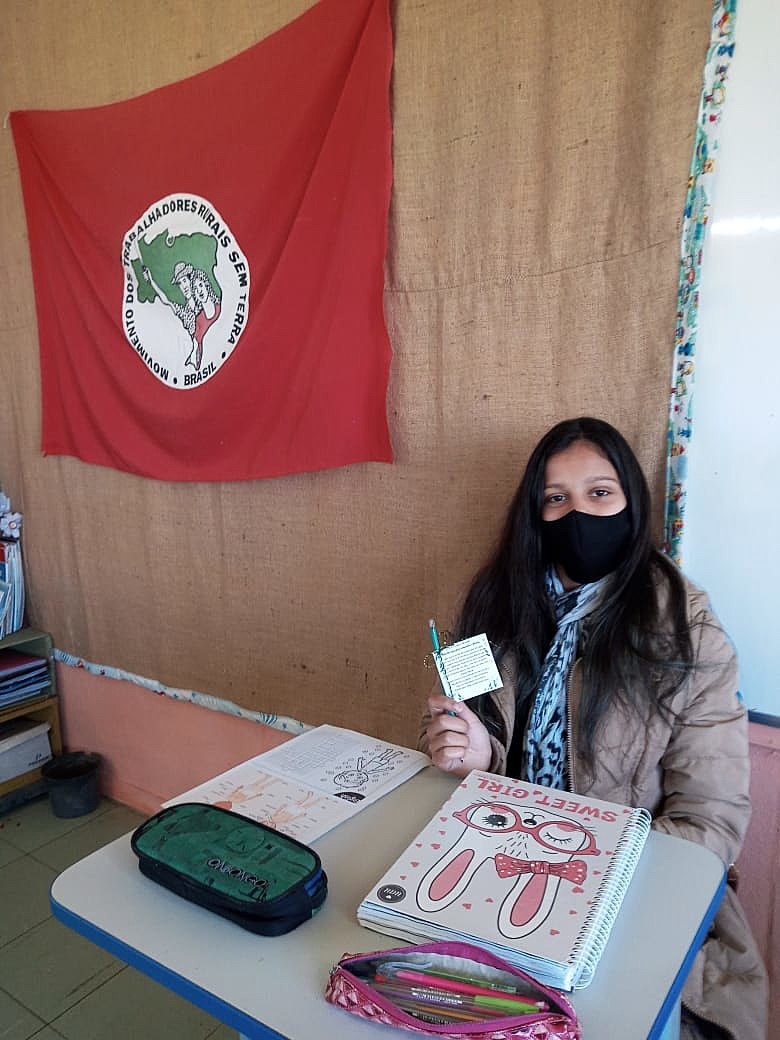 The initiative helps to show the importance of education for the new school generations, and for this reason, former students of the institution were invited to debate the magnitude of teaching as a form of personal construction and a relationship with nature.

For this, lives were held from the 8th to the 15th of June and had the participation of these ex-students from the Chico Mendes school. Who work in the region as biologists, agronomists, teachers and veterinarians.

The commission that acted in the broadcasts was formed by professionals known in the settlement, thus it became a more intimate environment for the debate on the environment, as explained by former student Lara Rodrigues, who is currently a social articulator for the Instituto Cultural Padre Josimo. “Even if the virtual space was not ideal for the meeting, however, it was the resource found to be able to hold the event”, says the settler.

With innovative projects, young students feel more motivated to participate in school activities, as reported by the student’s mother and settler Carmen Silvia from Assentamento Conquista do Futuro. “The community was very happy with this beautiful project. I think it’s very important for our children’s learning and for the environment,” said Sem Terra.

According to 11-year-old Sara Milena Veber Machado, daughter of settlers from Conquista da Fronteira, the action aroused her and her colleagues’ interest with learning linked to the preservation of the surrounding nature. “It was very cool. My colleagues and I plant trees. We presented the seed pencils and our families received certificates”, describes the student.

The project also reaches members outside the school.

This construction of environmental awareness is not limited to the new generations, it also embraces the older ones. One way to captivate the students’ parents was to hand out a certificate to the participants in the planting of fruit tree kits. With the receipt of proof of participation, it ends up building a sense of belonging and deserving of those involved in the action.

With the certificate in hand, people felt moved by the titles, as professor Cenira Hahn says. “Seeing people receive the certificate is exciting, it makes them feel part of this process,” says the educator.

In addition to this feeling, the voucher creates a commitment to the environment and future generations. This feeling attracted the interest of the entire community. First, the distribution was made to families linked to the institution and then to others interested in the initiative.

As the project not only encourages the children, but also all the participants of the plan “Tree Planting Roadmap Paulo Freire”, it shows that actions are important, as the teacher says with emotion. “Actions are concrete, words are just words. I need to keep hope and keep firm on the way and school is the way and it must teach the path for sure.”

“We are hummingbirds in the middle of the forest fire, we know we won’t put out the entire fire, but we must make sure we did our part. The environment is grateful, life is grateful”, concludes Cenira.