About 20 trucks of different sizes loaded more than 48 tons of cassava, beans, rice, cornmeal, potatoes, vegetables, fruit and milk donated by peasant families from Quedas do Iguaçu and Espigão Alto do Iguaçu to residents of the region, last Friday -Monday (23). In all, 2,100 food baskets and 2,600 liters of milk were shared in the solidarity action that marked the International Day of Family Farming, celebrated on Sunday, July 25th.

The food reached urban families in the municipalities and also in the Rio das Cobras Indigenous Land, located in Nova Laranjeiras, formed by the Kaingang and Guarani peoples.

::MST donates 1 million lunchboxes and 5 thousand tons of food during the pandemic::

Nine rural communities joined together for the activity, as a way to alleviate the effects of the economic and sanitary crisis brought about by the Bolsonaro government. Across Brazil, more than 116.8 million people do not have enough to eat or are hungry – according to a survey carried out in December 2020 by the Brazilian Research Network on Food and Nutritional Sovereignty and Security.

The blessing of food marked the beginning of the sharing, at Praça São Pedro, downtown Quedas do Iguaçu, with the participation of Father Carlos de Oliveira Egler, vicar general of the Diocese of Guarapuava, representing Bishop Dom Amilton Manoel da Silva. After a month of preparation, the moment of handover thrilled the peasants and authorities present.

“Today is the big day for us to be able to share what we have in our house. I want to extend a big hug to the families in the city on behalf of the whole ‘companion’, feel embraced by our food. Today we are donating a little of our life to you, and saying that there is a solution to hunger in Brazil, the solution is called Agrarian Reform”, said Jonas Furis, resident of the Dom Tomás Balduíno camp, in Quedas, and member coordination of the MST, in the opening act of the action.

Eight of the nine communities that participated in the action are part of the Landless Rural Workers Movement (MST), totaling more than two thousand families: in Quedas do Iguaçu, they are the Celso Furtado and Rio Perdido settlements; and the Vilmar Bordin camps; Dom Tomás Balduino; Fernando de Lara; and Leonir Orbach. In Espigão Alto do Iguaçu, there are the Second Conquista encampment (known as Solidor) and the Primeira Conquista settlement (known as Bracatinga). The Araucaria community from Quedas Iguaçu, not a member of the Movement, also participates in the mobilization. 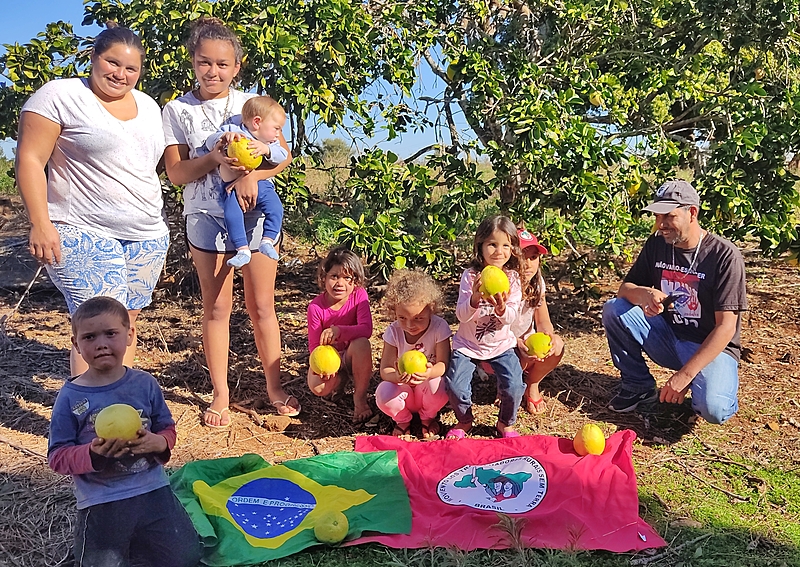 Eight of the nine communities participating in the action are part of the MST / Photo: Juliana Barbosa/MST-PR

In addition to the gesture of solidarity and protest against the growth of hunger, the initiative was a way of commemorating the achievement of the Rural Producer Registry (CAD/PRO) by more than 800 families camped in Quedas do Iguaçu. The broadcasts took place in recent weeks, responding to a long-standing demand of camped peasant families, and also to a technical note issued by the Public Ministry of Paraná, published in March.

The more than two thousand families involved in the mobilization share the struggle for the right to land to produce food and achieve a decent life. Most of the communities where peasant families live today were once under the control of a single owner, the timber company Giacomet Marodin, now Araupel. At least 83,000 hectares of public land, which covers different municipalities in the region, were acquired in a illegal way by the company in 1972.

Since 1996, when there was the first occupation in the region in areas owned by the company, the monoculture of pine has been replaced by the production of food from peasant agriculture. Among the communities that resulted from these struggles is the Celso Furtado settlement, with 1,200 families, the largest Agrarian Reform settlement in Latin America, and one of those that participated in Friday’s action. 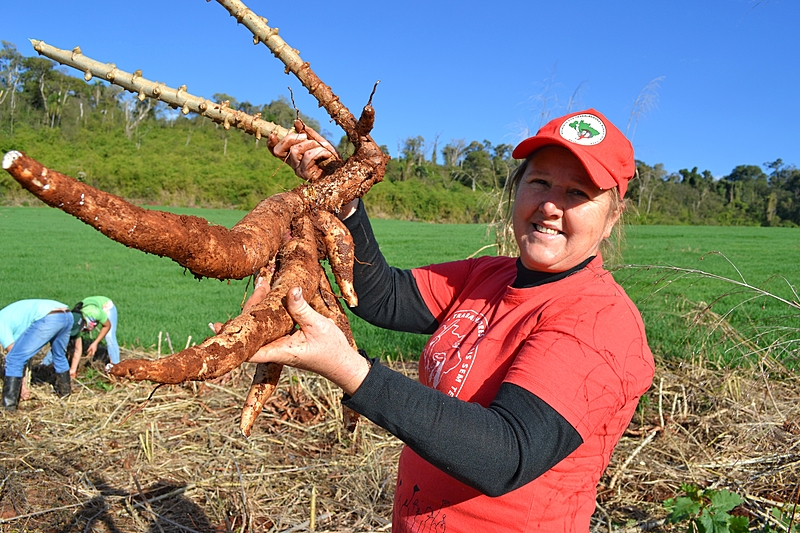 The more than two thousand families involved in the mobilization have in common the fight for the right to land / Photo: Juliana Barbosa/MST-PR

Confirmation of the practice of land grabbing came in August 2017, when the Federal Regional Court of the 4th Region (TRF-4) declared null part of the property titles of the Araupel timber company occupied by the MST. The determination was the result of a lawsuit filed by the National Institute for Colonization and Agrarian Reform (Incra) in 2014. Ten years ago, the Institute challenged the validity of the titles of the property located between the municipalities of Rio Bonito do Iguaçu and Quedas do Iguaçu .

::In conflict for decades in Paraná, Araupel and MST have opposite roles in the pandemic::

The judge of the Court of Justice of Paraná Fernando Prazeres, president of the State Commission for Land Conflicts of Paraná (CEJUSC), was present at the opening of food deliveries and emphasized the possibility of peaceful ways to resolve conflicts in the countryside. “I see today in this event the objective and purpose that our work in the Commission must achieve, which is precisely to bring the countryside and the city together, without any kind of conflict. We fight, and I see here the confluence of our goals, for a just, fraternal, egalitarian society, where land conflicts are resolved by consensus.” 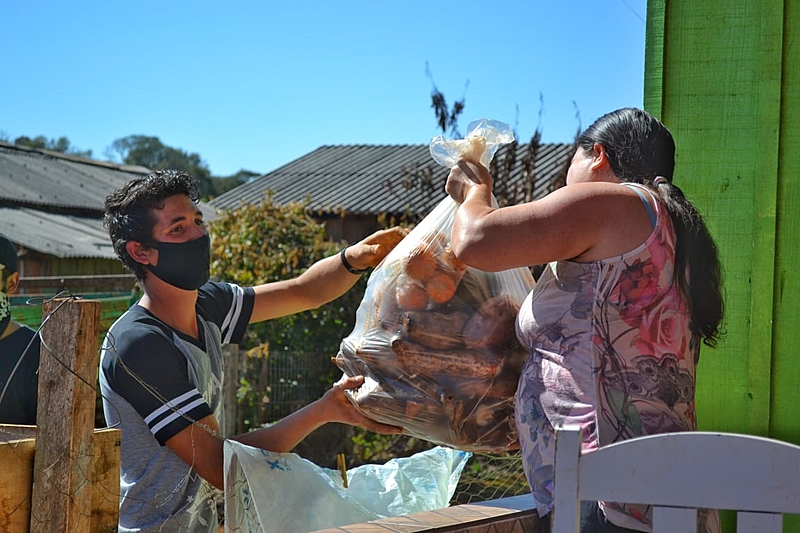 Donation of more than 48 tons of food on July 23 / Photo: Juliana Barbosa/MST-PR

The city’s deputy mayor, Edith Helma Maier, recognized the role of Landless Farming Families: “I am very moved by your effort, by the hand in hand of food fighters, health and life planters, why if we we don’t have food, we don’t have life, and you are responsible. This union that made you come here is the greatest example that union is strength.”

“Solidarity is love and union”

Jucimar da Silva, known as Pátria Livre, is among the thousands of landless families in the region who are still fighting for the right to remain in the areas where they live. The farmer lives in the Vilmar Bordim camp, in Quedas do Iguaçu. “We are on the ground, fighting for healthy food, without pesticides”, he explained.

In addition to donating part of the fruits of her labor, she and her son were part of a group of more than 50 people who helped in the joint effort to assemble the baskets and load the trucks in the community shed of the Celso Furtado settlement.

“As the mother of the family, I know what it’s like to put only rice in the pot and not have anything to give to the child, this is very sad. There are many families that sometimes do not have their daily bread to give to their child, and today we are donating to those who do not have it, and this is very gratifying”, said the farmer, moved. The peasant summarizes the meaning of the word solidarity as “love and union”. 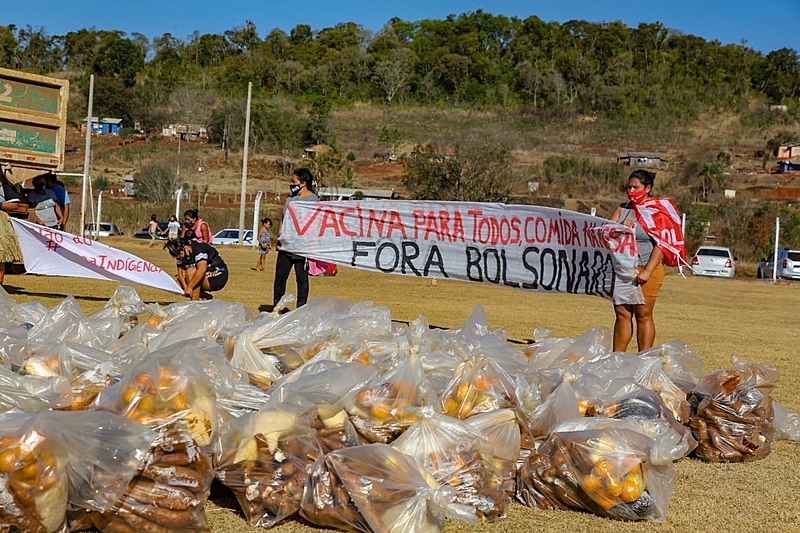 Iraci Dias, 61, was among the thousands of people who received a basket of food in Quedas do Iguaçu, “I thought today’s attitude was very beautiful, I can only thank you”.

She has friends who live in MST communities in the region and admires the achievements of the Sem Terra families over the years. “Sometimes they say ‘No Land.’ Without land we are the ones who live in the city and we don’t have it”, said Mrs. Iraci, in a joking tone. She lives in a rented house, along with seven other family members.

“A person with a salary cannot buy a house […]. It is pretty hard. People who pay rent have to pay, because if they don’t pay, I’m on the street. I can’t go live on the street with my grandchildren”. The family’s income comes from the work of her husband and son, who work in Cascavel.

Joraci França, also a resident of Quedas do Iguaçu, feels that the pandemic has worsened living conditions. “My husband is unemployed, working by the day. I am not retired and I have a lot of expenses with medicine. My income is Bolsa Família and it’s not much, only 89 reais. I want to thank and congratulate everyone who donated the food. I think what they are doing is very good, they are hardworking people, who like to share. Many criticize, many congratulate, I never criticized, I am in favor of the worker”, he said. 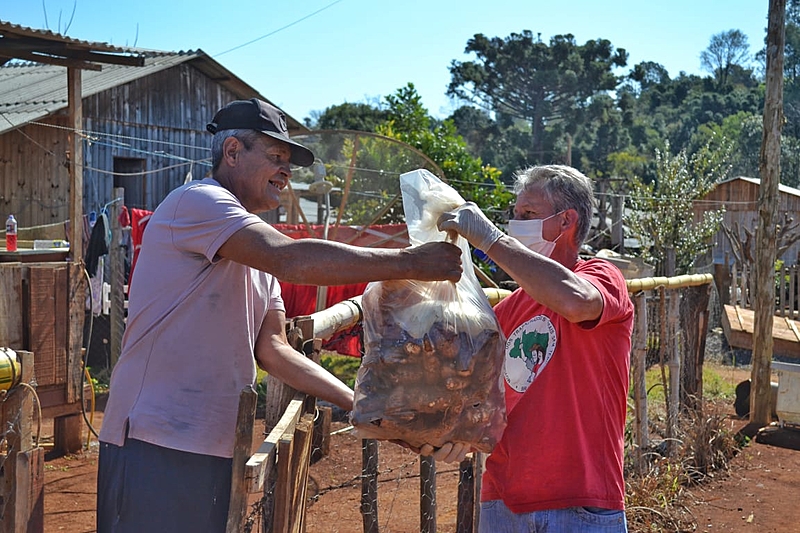 Augusto Conde, violinist of the Paraná Symphonic Orchestra, brought his art to the MST anthem. He is among the supporters of the Movement who participated in the act of opening and blessing the sharing. “The fight against inequality is everyone’s responsibility. It is a privilege to use our art in this cause,” said the musician, who is also a member of the Marmitas da Terra collective.

MST solidarity actions in the pandemic

The actions are part of the MST’s national campaign in solidarity with those facing unemployment and hunger. Across the country, more than five thousand tons of food and one million lunchboxes have been shared.

With the action carried out on Friday, the Landless families of Paraná shared more than 760 tons of healthy food since the beginning of the pandemic. The peasant families of Quedas do Iguaçu and Espigão alone have shared more than 113 tons of food. There were at least 120 food donation actions in nature and industrialized, with the participation of more than 60 camps and 130 settlements in the state.

::MST families donate more than 20 tons of food to communities in Paraná::

Since May 2020, the MST has also coordinated the Marmitas da Terra action, which produces and distributes meals to homeless people and those living on the outskirts of Curitiba and the Metropolitan Region. At least 1,100 lunchboxes are donated every Wednesday, for a total of more than 66,000 meals so far, produced mainly with food from Agrarian Reform areas.

In addition to the mobilizations in the Center region, another 300 food baskets from the Agrarian Reform were donated to families in the urban community Vila União, located in Tatuquara, also in the capital, on Saturday (24). Along with industrialized food, around three tons of fresh food came from the Maria Rosa do Contestado and Padre Roque Zimmermann camps, in Castro, the Contestado settlement, in Lapa, and the Maila Sabrina camp, in Ortigueira. The action has been organized since June 2020 by a group of entities, pastorals, unions and movements, including the MST. Coletivo Marmitas da Terra produced and distributed two thousand lunchboxes last Wednesday (21), in Curitiba and region.