In a virtual meeting, dozens of activists, leaders of popular movements, representatives of social pastorals, researchers and coordinators of solidarity campaigns gathered this Saturday (16) to highlight and detail the crucial role of social projects to fight hunger. Participants pointed out that, since March 2020, it is these mobilizations spread across all regions of the country that have represented a solid reaction to the increase in food insecurity and poverty.

The event, entitled Conference against hunger, was organized by the Landless Rural Workers Movement (MST), Mídia Ninja and 342 Artes, as part of the program of the International Day of Struggle for Food Sovereignty. Participants debated the relevance of a political unity of different organizations and movements around solidarity initiatives in the fight against hunger.

Eliana Silva, from the Redes da Maré project, an entity that works with the population of the Maré favelas, in Rio de Janeiro, highlighted the importance of uniting the countryside and the city in these mobilizations against hunger, and presented data on the work of the organization during the pandemic. “On the issue of food security, our campaign Maré Says No to Coronavirus managed to reach 18,000 families and distribute almost 40,000 tons of food,” said Eliana.

Another of the participants was Adriana Salay, researcher, historian and member of the Quebrada Alimentada project, which distributes meals and food baskets in Vila Medeiros, in the North of São Paulo. Salay highlighted the revolutionary character of actions to combat food insecurity and solidarity: “It is not possible to fight for a better and fairer world on an empty stomach. We need to have the strength to feed our community.”

The Homeless Workers Movement (MTST) was also part of the activity. Ana Paula Ribeiro, a member of the movement, presented the updated numbers of the Cozinha Solidária project, which already has 21 units built – eight in São Paulo alone – and has the goal of reaching 26 by the end of the year. The initiative has already managed to distribute 109 tons of food to at least 14 thousand people. “This is how we are going to react to this hunger project. Our suburbs are clamoring for justice. Our cities are abandoned. And our reaction is with solidarity,” said the activist.

Hunger as a political project

According to the National Survey on Food Insecurity in the Context of the Covid-19 Pandemic in Brazil, conducted by the PenSSAN Network, at the end of 2020, more than 19 million Brazilians were hungry. Another survey, carried out by a group of researchers from the University of Berlin, points out that 59.3% of Brazilians –125.6 million – have not eaten in ideal quality and quantity since the beginning of the pandemic. The research, entitled “Effects of the pandemic on food and the situation of food security in Brazil”, was coordinated by the Food for Justice Research Group: Power, Policy and Food Inequalities in the Bioeconomy.

The empty plate is an ever closer reality in the country. 59.3% of Brazilians – 125.6 million – did not eat ideas in quality and quantity since the beginning of the pandemic / Reproduction.

Meanwhile, agribusiness beats record exports and profits, even in this period of economic crisis due to the pandemic. In June of this year, the sector earned more than R$ 12 billion with the sale of commodities abroad. This is what makes scholars and activists, such as Francisco Paes, from the Franciscan Solidarity Service, aware of this inequality as a result of the very architecture of the economic system. “Hunger is a political project. Therefore, the importance of our political unity to create a new project”.

“How to face this? With the Food Sovereignty program, which in essence is the understanding that it is not enough for governments to have policies to distribute food (which would be giving the fish), it is necessary to have policies that teach how to fish, so that the people in each territory, whether in the municipality, state or country, produce all the food that the population needs,” explained João Pedro Stedile, leader of the Landless Rural Workers Movement (MST).

The leader listed some of the actions needed to guarantee the development of this project: “we have to guarantee access to land so that peasants can work it; guarantee the adoption of agroecology technology, which are the techniques that allow the production of healthy food without poison; we need policies that encourage the formation of agro-industries in the cooperative form; spread agricultural mechanization to the scale of peasants in small production units, and universalize access to knowledge,” explained Stedile.

In its commitment to combat the humanitarian crisis in Brazil under the government of Jair Bolsonaro, the MST has donated, since the beginning of the pandemic, more than 1 million lunchboxes and 5 thousand tons of food in several states. 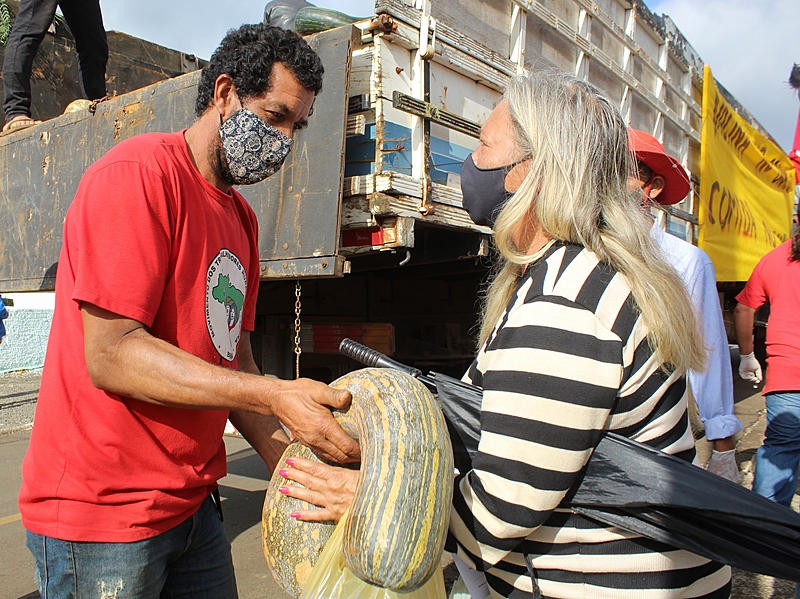 Solidarity action by the MST carried out in the municipalities of Guarapuava and Pinhão (PR), where the number of people living in poverty and extreme poverty grew during the pandemic. / Leonardo Henrique MST-PR

Meeting with the Pope

As part of the activities of the International Day of Struggle for Food Sovereignty, in the morning Pope Francis participated in the IV World Meeting with Popular Movements. He appealed to “the mighty of the earth” to work for more justice and to cancel this “system of death”. The Catholic leader also defended debt cancellation for poor countries, criticized the arms policy and suggested the breaking of patents so that everyone has access to vaccines against covid-19. 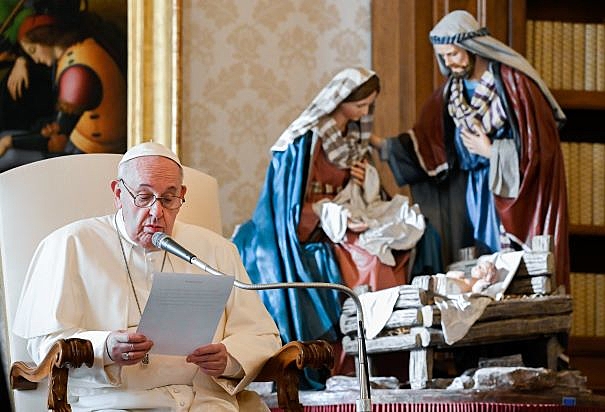 In another excerpt of the speech, the Pope called the activists and militants of popular movements “social poets”. “I call them that because they have the capacity and courage to arouse hope where rejection and exclusion reign,” he declared. Finally, the pontiff hardened criticism of the economic system which, according to him, “takes us to the abyss”: “This system, with its relentless logic of greed, is escaping all human domain. It’s time to stop the locomotive, an uncontrolled locomotive that is taking us to the abyss. We are still on time”.