Amid the most offensive attacks on the rights of indigenous peoples in the country, Governor Flávio Dino (PSB) signed this Thursday morning (20th) the bill that creates the Statute of Indigenous Peoples of Maranhão, in response to the demands of the native peoples.

With the presence of former president Luís Inácio Lula da Silva, at the invitation of the indigenous leader Sônia Guajajara, the moment was marked by a warm mystical welcome from the indigenous movements of Maranhão, Pará, Tocantins and Mato Grosso in the Itapiracó reserve, Environmental Protection Area in Sao Luis.

Former President Lula highlighted that the Legal Amazon, where Maranhão is located, concentrates 90.8% of the country’s illegal deforestation, through a constant cycle of destruction of the rights of traditional peoples, and points out the preservation of the environment as fundamental. for the preservation of human life.

“I didn’t expect to see indigenous peoples being treated like things, I didn’t expect to see a president encourage the invasion of their lands to plant cattle, soy, sugarcane and corn. This demonstrates the total and utter ignorance of this government, because a standing tree is much more valuable than a head of cattle eating grass in the pasture”.

Read too: Only 20% of public universities have quotas for quilombolas

Also during the act, Lula was baptized in a mystique inspired by indigenous ancestors through leaders of various ethnic groups. From the hands of Sônia Guajajara and chief Silvio Pistola, the former president received a Krepun spear, a necklace and a Timbira helmet, symbols of struggle that made him guardian of the territories of indigenous peoples.

“May you take over this country again. We can no longer support a Brazil adrift, a Brazil without a government. This is the last great cry that Mother Earth gives us, in the name of protecting our lands: ‘seek reconnection with your ancestry, only she can save the future of humanity”, declared Sônia Guajajara. 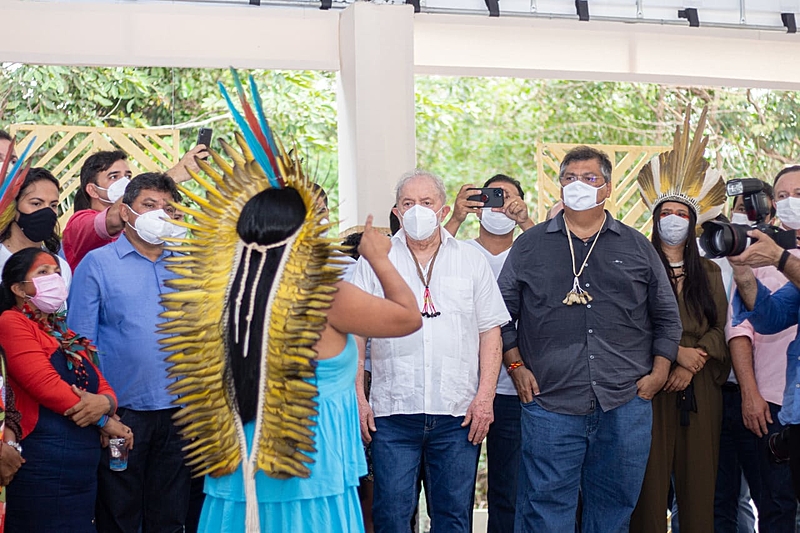 Sônia Guajajara highlighted in her speech the setbacks to the rights of indigenous peoples during the Bolsonaro government / Credits: Hannah Letícia / MST-MA

Governor Flávio Dino explains that the Statute is a historic initiative in the country and announces that from then on, all international resources received from the conservation work will be applied in indigenous lands (TIs), with the legal care that no later government can change this measure.

“Our alliance with indigenous peoples is in favor of life, it is in favor of all of us. We need to understand that global warming and pandemics are not just for them, they are for all of us and we need to be together. There is no climate security in the world without the Amazon”, said Dino.

According to the report Conflicts in Campo Brasil – 2020, the largest number of land conflicts, territorial invasions and murders for water conflicts in the country’s history has been recorded under the Bolsonaro government.

Among the alarming numbers, indigenous peoples are the most threatened. It is estimated that of the 81,225 families that had their lands and territories invaded in 2020, 58,327 of these families are indigenous, that is, 71.8%.

Sônia Guajajara highlights the setbacks to the rights of indigenous peoples during the Bolsonaro government, which, with actions and speeches in defense of the invasion of traditional communities’ lands, stimulated the growing offensive by miners and large landowners.

“It is no longer possible to build a country without us. We’re here where we’ve always been, but we haven’t always been seen. Bolsonaro’s political situation not only makes us invisible, but also plans to exterminate us”, explains Sonia.