This Monday (8), Luis Arce completes one year of office as president of Bolivia. After winning in the 1st round with 55% of the votes a delicate electoral process, postponed on three occasions, the representative of the Movement to Socialism managed to defeat the coup d’état.

The return of the MAS-IPSP opened the way to investigate the crimes committed during the interim term of Jeanine Áñez, who took over the government after a coup d’état against Evo Morales and Álvaro García Linera, elected for the fourth term in 2019. Áñez remains in charge. of terrorism, conspiracy and sedition, while other former officials remain on the run from justice.

Find out more: New report confirms that there were massacres and police abuse during 2019 coup in Bolivia

Former ministers of Áñez are said to have planned an attack on Arce to prevent him from assuming the presidency. Investigations by the Bolivian Public Ministry and the Bolivian National Police revealed audio exchanges between former Defense Minister Luis Fernando López and US advisers who reportedly sent paramilitaries to La Paz in November last year. Some of those involved in the attempted murder of Luis Arce also participated in the assassination of Haitian President Jovenel Moise.

:: Bolivia asks Brazil to extradite former defense minister who had fled from justice ::

This was not the only destabilizing action of the last year. The Bolivian government denounces that Luis Fernando Camacho, current governor of the state of Santa Cruz and protagonist of the coup, sought to animate a lockout – stoppage of activities – in October this year with the aim of removing Luis Arce.

Against the opposition demonstrations, Bolivian popular movements occupied the streets of the country’s main cities on October 12 to celebrate the day of Indigenous Resistance / Bolivia Presidency

At the beginning of the administration, the international press spread the idea that Arce, former minister of Economy of Morales, would be just a spokesman for the wishes of the former indigenous president in charge of the country. However, with the composition of the cabinet of ministers, Arce sought to differentiate himself from previous administrations.

With a cabinet formed by young people “product of the revolution”, Arce appointed 16 ministers who had not headed any portfolio in the previous administrations of the MAS-IPSP, although they had participated in the government. “Left technocrat” was characterized by some Bolivian political analysts as the government team.

Both Morales and García Linera were left out of public office in the new government, but they continue to lead the Movement to Socialism.

In the first 100 days, it fulfilled several campaign promises, such as the payment of the Bonus against Hunger for 4 million Bolivians, in the amount of US$ 140 (about R$ 770); the creation of wealth tax: a rate of 1.4% to 1.9% income tax on 152 millionaires with assets above R$22 million.

About 2.2 million students have also benefited from the Juancito Pinto Bonus and just over 1 million seniors have joined the Renda Dignidade program.

The MAS-IPSP leader ended his first six months in office with 52% credibility, according to a survey by the Latin American Strategic Center for Geopolitics (Celag).

After being the centerpiece of the Bolivian “economic miracle” based on the Social, Community and Productive Economic Model of the economy, which yielded an average of 4% annual growth and cut poverty by half, Arce welcomed a country in crisis.

In just 11 months of management, Áñez nearly tripled the country’s internal debt, from US$ 2.7 million to US$ 8.7 million, and led a 5.6% retraction of the national GDP.

Arce revoked almost all economic decrees approved by the predecessor and reactivated six public companies closed during the interim administration. Public investment increased 111% in the last year, according to official data.

Read more: President of Bolivia revokes a predecessor’s decree that allowed the use of transgenics

In the first half of the year, Bolivia recorded an overall economic activity index of 8.7%. Some sectors stood out, such as mining which grew 52.4%, civil construction with 32.8% and transport with 22.6%. There was also a increase 35% of shipments sent from abroad in 2021.

“For the first time in Bolivia’s history, the amounts deposited in public savings rose by 200 billion Bolivians [cerca de R$ 162 bilhões]. As a unit, we are reactivating the economy”, celebrated Arch.

The Bolivian government wants to continue its industrialization plans for lithium, an essential mineral for the construction of electronic batteries. With the Salar Uyuni – the largest salt desert in the world – Bolivia also has the largest certified lithium reserve on the planet with 21 million tons.

In October, Luis Arce also signed a series of bilateral agreements with newly elected Peruvian President Pedro Castillo, with the aim of developing agriculture and mining in the two neighboring countries.; 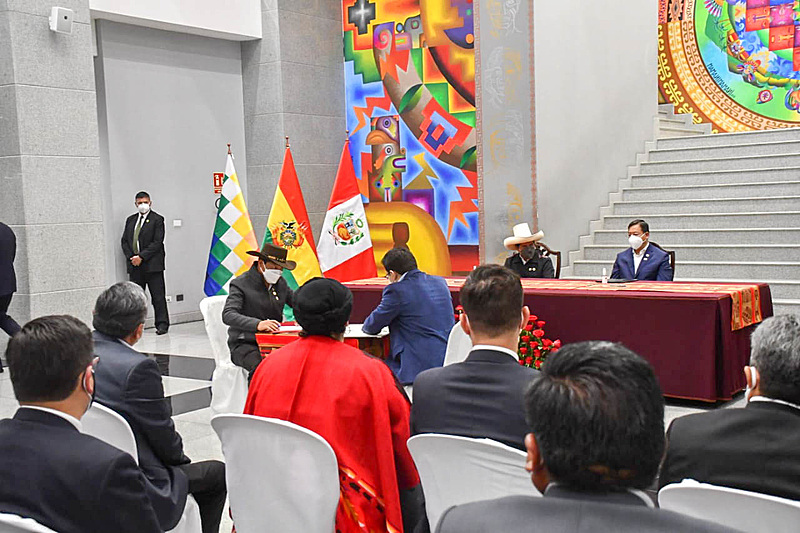 Bolivia managed to control the spread of the virus with 62% of the population immunized with at least one dose, with a total of 7.8 million vaccines applied, according to the Ministry of Health and Sports. In October, the country started vaccinating teenagers between 16 and 17 years old.

The country is experiencing a fourth wave of contagion, and that is why it will also establish a biosafety protocol with Peru to prevent further transmission of the virus across land borders.

Since March 2020, Bolivia has accumulated 514,000 cases and 18.9 thousand died by covid-19, with a fatality rate of 2.7%. The Ministry of Health also announced that by the end of October, five states in the country had executed more than 50% of the budget to fight the health emergency and implement new structures of the Unified Health System (SUS).

With the advance of immunization and signs of an upturn in the economy, the estimate of the Economic Commission for Latin America and the Caribbean (ECLAC) is that Bolivia is among the five nations with the best growth rates for 2021.