“We hear President Bolsonaro say that the indigenous people are setting fire to the Amazon. Our people don’t do that. The invaders are the ones who set fire to clear the road so that they can enter more easily. But there is a lack of government support to oversee. We keep thinking: What do they want? Do they want to take [a terra] of us, little by little?”

The report is by Natanael Karajá, chief of the Lariwana village, on Bananal Island. The Parque do Araguaia Indigenous Land (TI), where he lives, registered 1358 fires in 2021.

The number places the area at the top of the ranking of the National Institute for Space Research (Inpe), with almost 18% of all fires registered in indigenous lands this year.

Data were extracted from the BDQueimadas platform and cover the period between January 1st and September 30th, 2021.

In April, the Jair Bolsonaro (non-party) government approved a 24% cut in the Environment budget for this year. Of the total initially forecast, environmental control and inspection actions lost R$ 11.6 million, while forest fire prevention and control decreased by R$ 6 million.

The biggest fires are concentrated in a region known as Mata do Mamao, where isolated indigenous people live. It is the largest forest massif on Bananal Island, with about 110 thousand hectares.

Operation to contain fires in Mata do Mamao, considered the most critical area on Bananal Island / Ascom / Ibama

In conversation with the Brazil in fact, IT residents express concern about the advance of cattle raising and the presence of invaders.

Respondents also questioned the dismantling of inspection bodies of the Ministry of the Environment (MMA), such as the Brazilian Institute for the Environment and Renewable Natural Resources (Ibama). 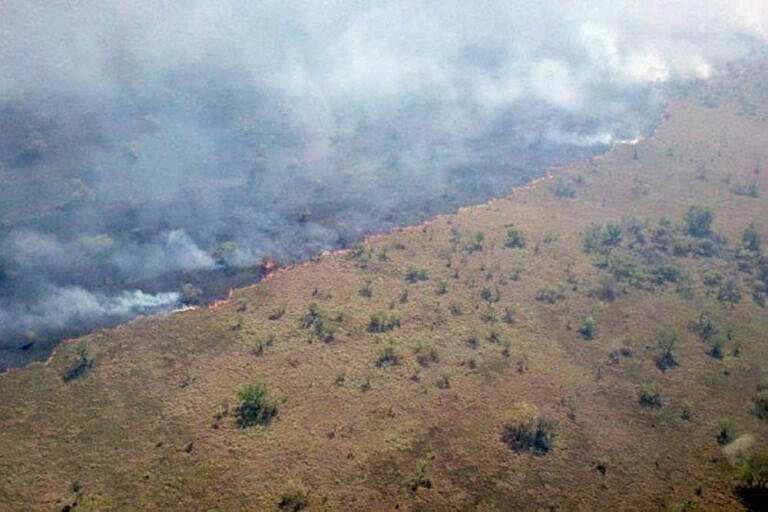 Bananal Island is the largest river island in the world, with 1.9 million hectares. It is surrounded by the Araguaia and Javaés rivers, is on the triple border between Tocantins, Mato Grosso and Pará, and is part of the Legal Amazon.

In addition to the TI Parque do Araguaia, the island houses the TI Inawebohona and the Araguaia National Park.

“Until five years ago, Ibama worked with the idea of ​​zero deforestation. Since then, we started to use a technique called Integral Fire Management, based on anticipated, prescribed or controlled burnings, to reduce the combustible material and avoid large fires during the burning season”, explains the indigenous Vantuires Javaé, who lives on the eastern portion of the Island.

In the last two years, he reports that the management work was hampered by the pandemic. Therefore, the fires would have increased.

“Inpe accuses hot spots, without differentiating between what is a fire and what is controlled burning. We can identify by time. From July to September, you can know it’s a fire.”

July was the worst month in 2021, according to the Inpe platform, with 676 outbreaks – more than double the registered in the same period of the previous year.

The first reports of cattle raising on Bananal Island date back to the 1920s. The activity intensified in the second half of the century, with the installation of farms on the banks of the Araguaia and Javaés rivers.

In 1969, the National Indian Foundation (Funai) decided to charge fees for the use of pastures. Instead of inhibiting the activity, the measure legalized the permanence of ranchers on the island.

Twenty years later, indigenous Javaé denounced to the Attorney General’s Office (PGR) the invasion of their lands by squatters. By court decision, Funai suspended irregular leases and removed the invaders.

After a series of contradictory decisions on the subject, cattle raising within the TI Parque do Araguaia was allowed again in 2009. The authorization is the result of an agreement signed between indigenous people and the Federal Public Ministry (MPF) in Tocantins.

Today, there are about 120 thousand heads of cattle on Bananal Island. Just over 30 years ago, the estimated number was 300,000.

“There is a project here on the island where non-Indians put the cattle and pay for the use of pastures,” says Vantuíres Javaé, referring to the legal lease.

“Maybe livestock farming does not work as it should and needs more regulation, but the indigenous people are aware and allow this activity.”

Reports obtained by Brazil in fact on condition of anonymity they point to livestock as the main cause of fires.

Chief Natanael Karajá lives on the banks of the Araguaia River says that the lack of inspection makes it difficult to identify those responsible for the fire.

“I was born and raised here. I’m in my 40s and I always talk to the older ones. They say that in their time there was not as much fire as today”, he recalls.

“We always hear complaints that farmers are setting fires, but they say they do it at the right time [queima controlada]. So, we don’t know if the fire is the fault of the farmers or of the illegal fishermen, who enter Bananal Island.”

Natanael says that the presence of loggers and fishermen is increasingly frequent in the TI, and the indigenous people do not have the tools to monitor and stop these illegal activities.

“Isla do Bananal is very rich in fish. The most popular is the pirarucu, but they also come after the peacock bass, the Pintado and the tortoise. Her meat is very tasty and very expensive. They take it out and take it frozen, mainly to Pará”, says the chief.

Kamutaja Silva Ãwa belongs to the ãwa people, known in the literature as the avá-canoeiro and regionally as the black face. She claims that the presence of invaders already impacts the livelihood of her family members, who are awaiting the completion of the land demarcation process.

“My family lives from hunting. We receive a subsidy until our indigenous land leaves [concluir a demarcação]. What you buy is just rice, beans, those things. The complement comes with hunting and fishing. And the fires kill the biome and the animals that are there”, he says.

Among the animals most hunted by the avá-canoeiro are the deer, the tapir and the catitu, also known as the wild pig.

“The fish they had before have been decreasing a lot – big fish, which are usually found in preserved places. I have heard, in the region of Boto Velho village [da etnia Javaé], that there has been a lot of illegal fishing to sell fish and turtles”, stresses the indigenous woman.

Kamutaja’s mother, brothers and nephews live “in favor” – in her words – in a village of the Jê people (Javaé and Karajá) while they wait for the demarcation. Altogether, there are 32 in this condition.

Kamutaja is the only one who left Bananal Island, due to the living conditions to which her people are subjected. At 18, she moved to Palmas (TO) with her husband, and now studies Pedagogy.

“This year, loggers entered Bananal Island to cut down trees that were more than a hundred years old. Native wood”, laments the indigenous woman.

At the time, teams from the Environmental Police and Funai confirmed that at least one hundred-year-old Jatobá was felled by illegal loggers.

the most critical place

Vantuires Javaé participated, for more than 30 days, in an operation to contain the spread of fire in Mata do Mamao, considered the most critical fire site on the island.

The operation, led by Ibama and the Chico Mendes Institute for Environmental Conservation (ICMBio), began on July 19 and is classified as level 3 – when it requires more sophisticated monitoring and calls for brigades from other states. 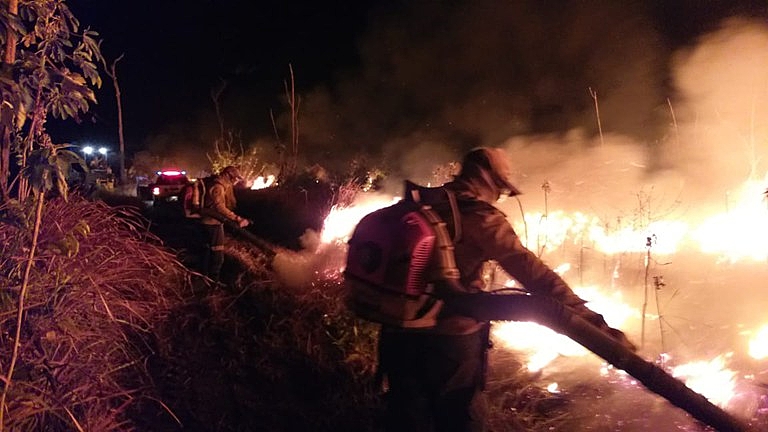 “There is a very long history of fires there. The area is managed by ICMBio, which does not have enough body to meet this demand. So, we look for outsiders to help with the operations”, says the indigenous person.

“As the region has already burned in previous years, it has a lot of regeneration area, and then grasses are born, which have a lot of potential for fire in the driest months. That’s where the big fires start. It’s hard to control.”

According to IBAMA, 142 people were directly involved in the operation, including civil servants, firefighters from IBAMA and ICMBio and a civil servant from Funai, equipped with 17 vehicles with traction, a truck, a helicopter, a quadricycle, three adapted vehicles, among other vehicles.

Kamutaja Silva Ãwa recalls that Mata do Mamao is one of the last refuges of indigenous Avá-canoeiro in voluntary isolation.

“My grandfather, a survivor of the forced contact in 1973, says that there were more of us in Mata do Mamao, without contact with non-indigenous society. During my 27 years, I have heard about these relatives in the forest”, he recalls.

“In 2019, 80% of the forest was burned. This year, too. I don’t know the percentage, but there was an uncontrolled fire in the Mata do Mamao. And this fire was not being noticed, because the focus was all on voting the time frame.”

Chief Natanael Karajá emphasizes that, without the support of Organs competent bodies, there is no way to protect Bananal Island from fire and invaders.

“As a leader in the region, we are concerned. Nature is increasingly changing. It is not the Ilha do Bananal that it used to be”, he says.

“The logging is taking place about 18 km from my village. People enter without authorization, they fish illegally, they remove wood. This year, there was virtually no incentive from Funai. They say they have it, but for us it remains the same: without inspection.”

Concerned about her family and more than 200 km away from her homeland, Kamutaja emphasizes the feeling of impotence in the face of invasions.

“Ilha do Bananal is large and deserves special attention from Funai, from the people who supervise it. The entry points are diverse, so we don’t know who gets in or what they’re doing,” he says.

O Brazil in fact presented questions about inspection to Funai, MMA and Ibama. There was no return until the closing of the article.