Volunteer brigade since 2017, he says that one of the consequences, although subtle to be noticed, is that it has become rare to see large animals in the region, in addition to the absence of vegetables and some fruits.

::Fires are a culture of destruction that extinguishes animals, springs and biomes, says expert::

Scarlett Luz, entrepreneur and teacher, who has lived in the region for 18 years, also feels that the green area has reduced “a lot”, while the monoculture area has grown.

“During this period, there was already a lot of cashew and, this year, it hasn’t produced a large quantity yet. I think it’s a set, it’s the burning with pesticides that are sprayed on the crop. Much of what burned now is just farming and pasture.”

In 2020, 552 fires were recorded in the eight municipalities that make up the Chapada dos Veadeiros Microregion, according to the Queimadas Database (BDQ), of the National Institute for Space Research (Inpe). From January to September this year, there are already 609 outbreaks. Faced with so many fires, it would be common to expect a reasonable number of investigations into the possible culprits and causes.

Also in 2020, however, only four police inquiries were initiated regarding fires in vegetation in the region, and only one inquiry with authorship appointed by the authorities and police investigations of Goiás was sent to the Judiciary, according to data from the Public Security Secretariat (SSP) of the state, obtained by Brazil in fact through the Access to Information Act (LAI).

::What are the types of illegal fires most used by agribusiness in the Amazon::

The agency also reported that the number of fire occurrences registered by the Military Fire Department of the State of Goiás is significantly lower than the outbreaks accounted for by Inpe, only 59 occurrences compared to 552 outbreaks.

This is because the Fire Database detects fire outbreaks through spatial and temporal analyzes in satellite images, updated every three hours, while the Fire Department records refer only to those that are communicated to the agency.

This year, from January to September, eight inquiries were opened, and only three with defined authorship were sent to the Judiciary. The SSP also reported that the data “is subject to variation as investigations progress.”

During this period, the Fire Department responded to 255 incidents. O Brazil in fact he sought out the Goiás State Military Fire Department to comment on the difference in relation to Inpe’s data, but there was no return until the publication of this report.

According to Yuri Marinho, environmental consultant, the criminal sphere is not the most common path in Brazil when it comes to environmental infractions. There are an extensive number of fines, which are of an administrative nature, and legal proceedings of a civil nature. Police inquiries, essentially, do not refer to administrative or civil matters, but to crimes as defined by law.

At the federal level, data from the Brazilian Institute for the Environment and Renewable Natural Resources (IBAMA), however, are also significantly insignificant in relation to environmental infractions with “flora” type infractions.

In 2020, there were only two assessments in the set of eight municipalities that make up the Chapada dos Veadeiros Microregion, totaling R$ 181,224.30 in fines.

From January to September 2021, there were seven assessments, in the amount of R$ 1,261,950.50 in fines. Almost all of the infractions are related to non-compliance with the norms established by Decree 6,514 of 2008, which provides for administrative infractions and sanctions to the environment. 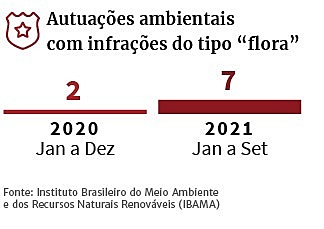 Given the numbers, Suely Araújo, former president of IBAMA and senior public policy specialist at the Climate Observatory, states that “environmental agencies are making an effort to fight fires, but they have great difficulty in holding the culprits accountable. Police authorities initiate few investigations into criminal offenses related to fires”.

For Araújo, “society has to demand energetic measures for the prevention and control of fires in forests and forests and, this is very important, for the accountability of those who caused them. Destruction cannot be understood as a normal situation, arising from cultural practices”. And he asks: “What are the laws in this country for?”

::Forest fires cause the hospitalization of 47 thousand Brazilians per year::

At the state level, the State Secretariat for the Environment and Sustainable Development of Goiás (Semad) does not make the Environmental Infraction Notices available online, as does Ibama. O Brazil in fact contacted the agency requesting the information, but did not receive a response until the end of this report.

There is no lack of laws

For Murilo Mendonça, a member of the National Campaign in Defense of the Cerrado and professor of the Postgraduate Program in Geography at the State University of Goiás (UEG), the numbers indicate that there is a complacency of the powers in not criminalizing the fire issue. “They end up considering the issues as accidental and do not take the processes forward.”

“What could make it easier would be stronger action by the Public Ministry or the judicial area related to the issue of the environment or by the environmental police themselves,” says Mendonça. For the professor, “the big problem is the political will to solve and, in fact, investigate” the causes of the fire”.

For Yuri Marinho, practically no environmental inspection body is in good condition to act at the moment. Added to this is the political position of the federal government against a culture of inspection and preservation of the environment.

“We live in a moment when inspectors do not feel morally authorized to inspect and fight as in previous years. I think that part of the area owners, on the other hand, feel empowered, and I think there is a momentary political structure to treat all of this as something normal”, says Marinho.

In the same vein, Mariana Napolitano, Science Manager at WWF Brazil, states that “the reduction in the inspection capacity and assessment of the responsible agencies” contributes to this scenario and the increase in fires.

According to data from the organization, between January 1 and September 30, 2021, 73 fire outbreaks were recorded in Chapada dos Veadeiros National Park alone, the highest number since 2017 — 62% higher than the average of outbreaks that hit the park in the last few years. ten years: 45.6 outbreaks.

In this account, “agriculture continues to be a major driver of deforestation and loss of other natural ecosystems in Brazil. In the Cerrado, the oldest and most biodiverse savanna in the world, more than 7,300 square kilometers were lost in 2020, and this destruction is happening even faster this year”, says Napolitano.

In the crosshairs of agribusiness

It is, in Murilo Mendonça’s view, an agribusiness strategy of advancing agricultural frontiers, based on fires, a strategy carried out with the support of the federal government.

Therefore, the “precariousness of all combat and inspection institutions”, he points out.

“In this government, specifically in the last two years, we have seen so much in the scope of ICMBio [Instituto Chico Mendes de Conservação da Biodiversidade] as in IBAMA’s, a precariousness of the structure. In fact, it is a boycott that the government is doing to these organizations in the sense of oversight control”. 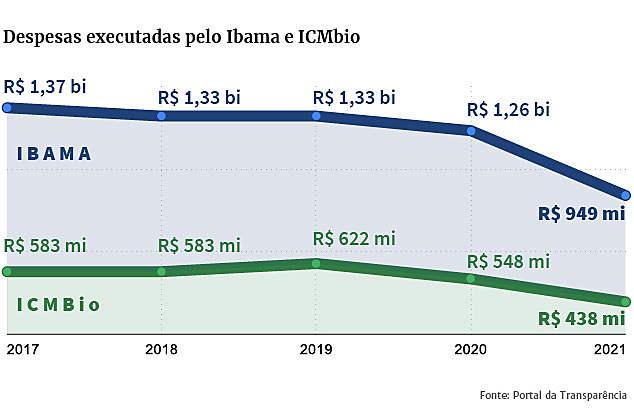 In the eastern region, records from regions that have already been deforested and are now used for pasture predominate. On the west side of the park, where large scale fires were observed this September, fire records predominate.

“There was a greater increase in recent areas. We have the greatest development in recent years in new areas than in areas already consolidated in terms of deforestation”, says Mendonça. 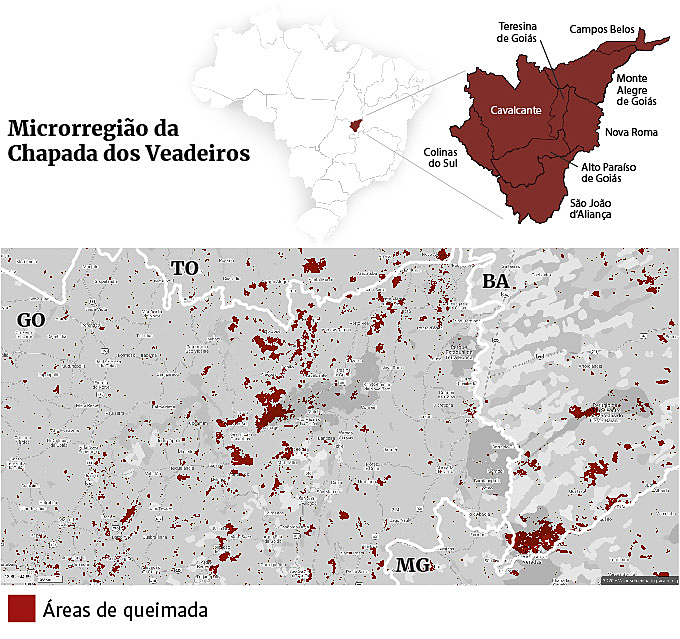 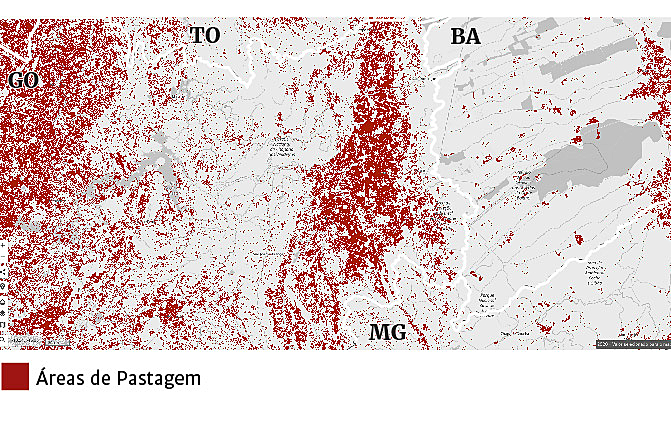 “This advance in the state of Goiás by the large landowners to use fire and deforestation as a strategy to open new areas for agribusiness has occurred especially in this area, which is the Chapada dos Veadeiros region”, says Mendonça.

This year, in the second half of September, the fire that made the covers of newspapers after hitting the Vale da Lua, a tourist attraction in the region, burned 36,000 hectares from the western region of the park. The investigation by the Civil Police of Goiás is on a farmer who would be setting fire to deforested vegetation on his property.

Ane Alencar, director of Science at the Amazon Environmental Research Institute (Ipam), says that, in recent years, the road that connects Brasília to the Chapada dos Veadeiros region has been basically transformed into areas of large cultivation.

“There are several transformations around the Chapada, transformations in the landscape that are striking, a complete conversion of the Cerrado into large soy fields. This has an effect on the dynamics of the energy balance in that region”, says Alencar.

The director explains that natural fire is part of the Cerrado’s evolutionary process, but it occurs under specific conditions, close to rain and without much extension. “This leads us to believe that fires in the Cerrado today happen mainly because people set fires,” says Alencar.

::Cerrado catches fire away from the eyes of the media, says traditional community resident::

“One of the main sources of fire is pasture clearance. Fire is a step in the deforestation process. In the Cerrado region, many of the areas that have been deforested are cleared with a tractor. Then, the tractor and the chain will cut down these trees, then the piles of wood that have been felled are formed, which are then burned. Fire is this tool for converting what has been deforested into ashes”, explains Alencar.

The same is noticed by Vinicius Curva. “One moment you see native vegetation there and the next moment you see everything cut and calcined and then there is soy, eucalyptus, palm and corn, some kind of monoculture.”

At the National Congress, Federal Deputy Delegate Waldir (PSL/GO), filed the Bill of Legislative Decree 338, in August this year, to halt the park’s expansion in 2017, from 65,514 hectares to 240,586.56 hectares. According to the congressman, the “inordinate increase in size harms farmers in the region.”