“Commune or nothing,” ex-president Hugo Chávez said. For him, this was the path to the Bolivarian Revolution. And the commander’s word comes true in the Comuna El Maizal, the greatest experience of communal property in Venezuela.

For 12 years, in the interior of the country, between the states of Lara and Portuguesa, around 4,500 families live and produce healthy food in a totally collective way. The land was the result of an occupation in 2009 that guaranteed the plot for agrarian reform.

“Chávez promoted a new geometry of power that institutionality did not allow, he said it was illegal, but for us the commander’s word is law and that’s why we assume this format of commune here. And we have a community that, instead of being separated by visions different, it is united around a fight, a project”, recalls Angel Prado.

With a working day of 6 hours a day, 180 community members are responsible for the maintenance of 14 social production companies founded by the Comuna. In addition to corn, coffee, pulses and vegetables, farmers also process corn flour and produce milk, cheese and meat from cattle and pigs.

“Our history is linked to the cultivation. Our first seeds were delivered by President Chávez during a visit. We planted 150 hectares of beans and then he returned to check the production. From this cultivation, the company Ezequiel Zamora was born, which is a mechanization and cultivation company. It is the company that since 2010 has generated the most surplus for us and has allowed us to grow internally, as well as socially serving the communities that are within the commune”, recalls community member Jennifer Lamus.

Maizal means cornfield, which represents the base of production in the commune and the food of Venezuelans / Comuna El Maizal

This year, Maizal cultivated 300 hectares of corn, but across the country there are about 1100 hectares of corn cultivated with native seeds produced by the commune with support from the militants of the Apolônio de Carvalho Internationalist Brigade of the Landless Workers and Rural Workers Movement ( MST).

The main objective is to become a self-sustainable territory, both in terms of food and economy. Maizal kicked off the emergence of 11 other communes in central Venezuela. Chávez’s proposal was that communal properties unify the grassroots organization for a new “territorial hegemony”.

“All the work we did in the early years strengthened us and when the economy began to fall, the El Maizal commune remained firm and strong. Our resources helped to maintain our people’s fighting spirit and above all that no one demobilized or demoralized” , says Ángel Prado.

“In the country there is another reality and here we know that things are not going well, but every day the comrades do their best to make the reality of those who live in the commune different”, agrees Jennifer Lamus. 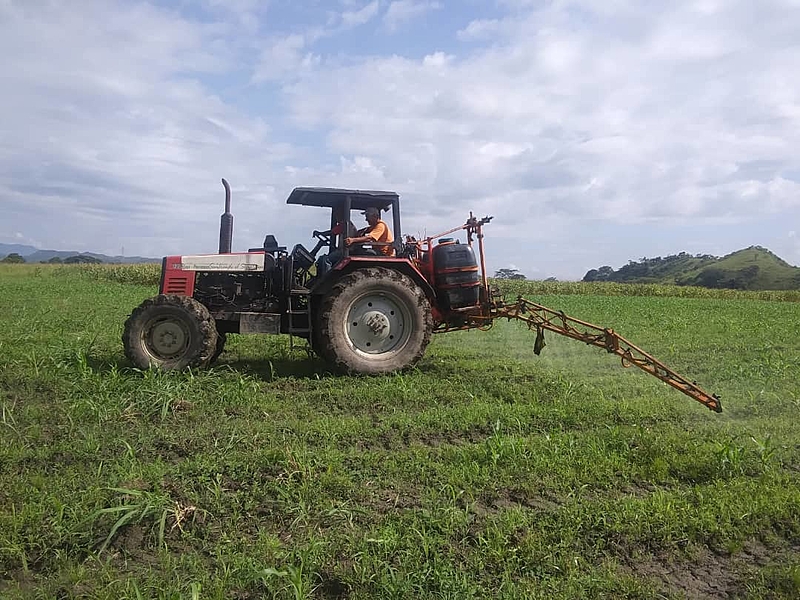 With the mechanization of cultivation, the Comuna can produce 2 thousand tons of corn per year / Comuna El Maizal

Due to its productive capacity, Maizal also helps small producers in the region, distributing credit in exchange for food production.

“We ask for greater financing and we give this credit to producers, who, through the normal means of the State, cannot. We also exchange products. Often, producers do not have the money to buy 1kg of cheese. So they can bring us 1kg of grain. of coffee, and they can take the cheese,” explains Jennifer Lamus.

Voluntary work in joint efforts is also an alternative for the community members, but not in a “welfareist way, but as a form of example”.

“Sometimes a production unit has more work behind schedule, so we invite everyone to carry out this work and keep pace with the other production units. And this applies not only to the commune. If it is necessary to clean a school, a street, paint a block or any other activity in the community, we go and do this work”, says Lamus.

Read also: Panal 2021: the commune that seeks to end Venezuela’s dependence on capitalism

Maizal’s territory includes the concern with the productive and social aspects. The community members founded a School of Ideological and Technical Training, where they offer courses with the support of activists from other national and international popular movements. They also opened a primary education school for the children of farmers, adopting Paulo Freire’s method.

“Practice and theory go hand in hand. A practice without historical elements of struggle, without theory, people would not be clear about the horizon’s objectives”, says community member Wildenys Matos.

Despite the production of around 2,000 tons of corn per year, Maizal cannot establish a direct relationship with the State to supply corn flour from the basic baskets distributed by the Local Supply and Production Committees (CLAP).

“The role that the commune fulfills is to demonstrate a different way of doing things. First, we can be self-sustainable, producing. We can change the rentier model for a productive and sustainable model, through the collective communal economy”, defends Matos.

According to official data, there are 3,567 registered communes across the country. Maizal militants promote the Comuna Union as a national movement that seeks to build a communal state in Venezuela.

“We have dedicated our lives to this project. The commune is our way of life. From the commune we would move to socialism or we would go on to a brutal war, such as the war of independence, to defend our homeland,” says Prado.

To continue advancing in territorial control, the comuneros will compete in regional elections on November 21 with Angel Prado’s candidacy for mayor of the municipality of Simón Planas. In the 2017 electoral process, Prado had already been elected mayor, but his candidacy was challenged by the electoral power.

“We, popular organizations, have to appropriate these spaces, not to strengthen the State, but to start dismantling that State from within, so that the commune can move forward in the territory. Commune or nothing. And not in rhetoric, it’s a commune to do things, that the power of the people is the power to decide, to be able to plan, make decisions and to be able to continue fighting, advancing,” says Wildenys Matos.

If elected, one of Angel Prado’s proposals is to establish contracts and bids between the city hall and the region’s communes, as well as increasing community control over basic services, such as gas and fuel distribution.

“Our strategic horizon is socialism and we want to give continuity to the Simón Bolívar national project. The commune as a political model has shown that it can work, produce, influence the country’s economy, industrialize its food, can dispute any battlefield, govern and assume responsibilities in our case, in Venezuela”, concludes Ángel Prado.