With the absence or insufficiency of actions by the federal, state and municipal governments to help the periphery, popular movements are collecting and distributing food in the towns and neighborhoods of the large cities in Rio Grande do Sul.

More than 700 tons of food have already been delivered. Engaged in the task are, for example, the Unified Workers Center (CUT) and 20 of its unions, the Small Farmers Movement (MPA), the Landless Rural Workers Movement (MST) and the Committee in Defense of Democracy and the Democratic state.

The Committee for the Defense of Democracy has already raised more than R$ 100,000, transformed into food baskets, gas canisters, stoves, pans, soap and detergent. This is what its financial coordinator, Sueli Mosqueur, says.

Attorney Jucemara Beltrame recalls that in March 2020 they began this work with poor communities in Porto Alegre. The criteria chosen to select the communities were the regions with the lowest Human Development Index (HDI) in the state capital. Guaíba Islands, Campo das Tuca, Lomba do Pinheiro, Vila Cruzeiro, indigenous communities and quilombolas have been helped.

Food and conversations about Brazil

CUT and its affiliated unions have donated more than 200 tons of food baskets to needy communities in Porto Alegre, Rio Grande, Caxias do Sul, Pelotas, Santa Maria and Erechim.

According to the president of CUT/RS, Amarildo Cenci, this activity was added, earlier this year, “with community kitchens, with events, such as a lunch to bring communities together around a dish, to talk and strengthen as a society , as a people”.

In his assessment, “this has been very successful, as it has stimulated and developed community leaders. This experience of having people around a table as we say has been strengthened, to debate so many other things, as we are now dealing with the popular plebiscite that questions privatization”. 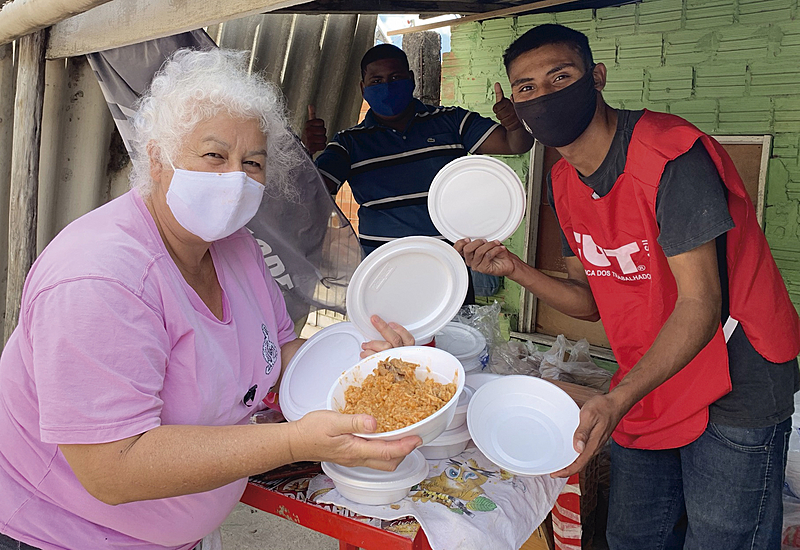 Each family donates a little of their production

Representing 13,800 families from 300 settlements in ten regions of the State of Rio Grande do Sul, the MST/RS has already donated more than 480 tons of food, a list that includes 45 products.

According to Gerônimo Pereira da Silva, who lives in Livramento and is the movement’s state leader, there is a list of 45 products ranging from rice, beans, meat, fruits, vegetables and even powdered milk. He said that only in the Metropolitan Region of Porto Alegre, the movement has been maintaining distribution in 30 community kitchens and 40 residents’ associations.

“These products are produced in excess by the settlers and donated as a contribution, they are not leftovers, each family donates a percentage of their production”, he explained. Gerônimo was moved from his region to coordinate this action to fight hunger at the beginning of the pandemic.