This Saturday morning (2), the protest in Rio de Janeiro for “Out, Bolsonaro” brought together the widest spectrum of political parties, unions and social movements of the demonstrations organized in recent months. It was also one of the biggest recent events held in Rio de Janeiro in terms of number of people: it is estimated that 70,000 protesters have appeared on the streets of the central region of the city.

Read also: Left and right unite for “Out, Bolsonaro”: see list of acts across the country

At the protest, the banners carried by the people criticized President Jair Bolsonaro (no party), mainly aimed at conducting the fight against the pandemic and the rise in the price of cooking gas and fuel. They also asked for the impeachment of the current president of the Republic.

The concentration of people took place in Candelária, from 10 am, and then the protest went through the streets of Avenida Presidente Vargas to Avenida Rio Branco towards Cinelândia, in the central region of the city.

On the platform set up in Cinelândia, João Paulo Rodrigues, from the national direction of the Landless Rural Workers Movement (MST), made a speech in which he reinforced the multiplicity of the protest composition in the capital of Rio de Janeiro and in Brazil.

“This act is more symbolic because it is one of the broader acts that we build in this final stretch by ‘outside, Bolsonaro’. In a little while, many of us are going to São Paulo to take more than 150,000 people to Avenida Paulista to say loud and clear that the Brazilian people can no longer stand genocide and lack of respect,” he said.

As well as the MST leadership, many of those present at this morning’s protest in Rio will also attend the afternoon protest in São Paulo, such as politician Ciro Gomes (PDT) and federal deputy Marcelo Freixo (PSB) . For the parliamentarian, the demonstrations this Saturday show that people do not want to wait until next year’s elections to defeat Bolsonaro.

“It is very important that the street is full, the whole of Brazil on the streets, in a little while we are in São Paulo. We will defeat Bolsonaro to defend employment, income and life. Brazil was hungry again in this government, but the country is much bigger than Bolsonaro. It’s very beautiful, all social movements and left-wing political parties are in the streets. It’s time to defend democracy,” he told the Brazil in fact. 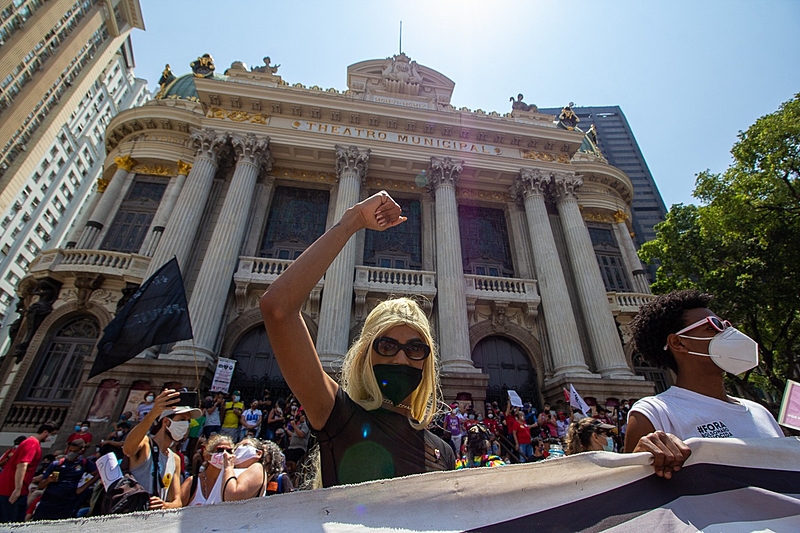 Thiago Santana, president of the Workers’ Party (PT) from Rio de Janeiro, also spoke about the confluence of political forces in this demonstration. “We are on the streets once again in an evolution of this whole movement that we have been making in favor of democracy and towards the ‘outside, Bolsonaro’. People who started in the field exclusively on the left, today notice the progress of this construction even with sectors on the right. Today, from the democratic field, together with the people, we are giving a greater demonstration of our strength”, he said.

On the podium, federal deputy Jandira Feghalli (PCdoB) drew applause to the protesters for maintaining the precautions against covid-19 in the protest even though it was packed.

“It’s good that the press shows everyone wearing a mask, it’s good that it shows that this one is a manifestation that defends life. It’s also a thrill to be standing in front of the sign in the name of Marielle Franco. I want to greet all the women who take to the streets in defense of Brazil”, she said. 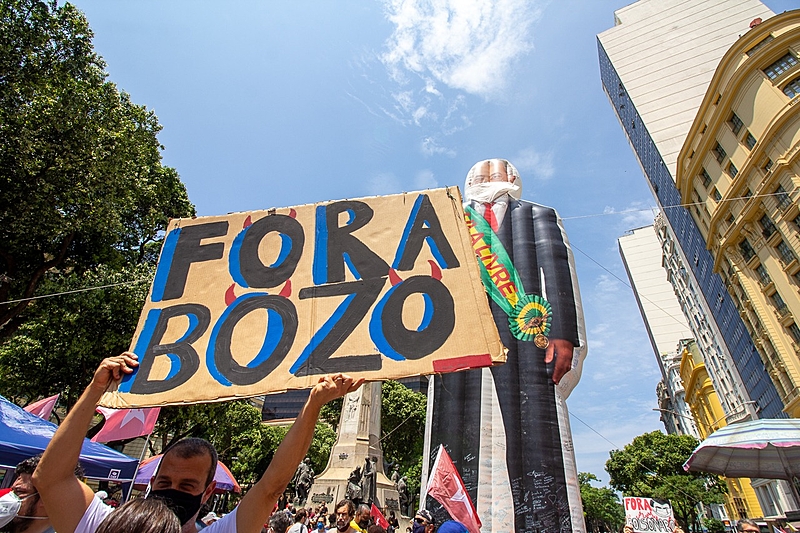 Bruna da Silva, a member of the Mães da Maré collective, made up of women who lost their children to state violence, was one of the many who received the parliamentary compliments at the demonstration.

“As a resident of Rio de Janeiro, I came here to show this Brazil in fact, how it is. We are here to put a stop to this genocide and shout all together ‘out, Bolsonaro’. We do not accept a president who does not take the vaccine and does not respect vaccination protocols. Does not respect Brazilians. An ungoverned president. It’s all this bunch that’s in power”, he concluded.