This Tuesday (24), the occupants of property belonging to Localiza were relocated to an inn. They were evicted from the site after the Minas Gerais Court of Justice (TJMG) accepted the company’s request to evict them.

Until recently, according to the occupants, the car rental chain did not talk to them. This Tuesday, however, he pledged to pay an inn for the 20 people who are in the house, located on Santa Catarina Street, on the corner of Bias Fortes Avenue, in the Lourdes neighborhood, in the center-south region.

:: Food or rent: pandemic forces more families to live in occupations to survive in RJ ::

The payment of the rent will take place until the city hall of the capital can accommodate the occupants through public policies such as the Housing Grant.

On Monday (23), members of the occupation, known as Anyky Lima, protested in the center of the capital against the decision of the TJMG. While the protest was taking place, occupation leaders met with representatives of the city of Belo Horizonte, which decided to enter the process to suspend the decision. The Executive’s petition took place at the end of this Monday.

Loss of income from the pandemic

The Anyky Lima occupation draws attention because it is the result of the current national economic situation. The reason for most of the occupants to be there was the loss of income, especially in recent months.

Yula de Azevedo is 43 years old. She is married and has been working with her husband for 1 month. Both are from Ipatinga, where she worked at a veterinary clinic as a groomer. The companion “did odd jobs”. “I lost my job and then there was no way for us to pay the rent. This, together with other family problems, made us come to Belo Horizonte”, said Yula. “When we arrived here a friend of mine said that there was a vacancy here in the occupation. Then we came”.

Yula in her room / Marcelo Gomes

“Local never came here to talk to us. We don’t invade it here. Invasion is one thing. Occupation is another. Nobody is born on the street. We came for precision”, he vented.

The report visited the occupation and found that practically all 20 occupants of the property are there due to loss of income. Some have lost income in recent months. Others have been facing this situation for longer.

This is the case of Larissa Prado, 34, and artist Gilmar Rodrigues, 38. She has lived on the streets for 3 years.

“My God, I keep thinking: where are we going? Wow, that decision is already so close. Will they really do this to us? I’ve been on the street this time because I’m out of a job”, said Larissa.

:: Receive news from Minas Gerais on your Whatsapp. Click here ::

Gilmar told us little about his life. He only mentioned that before the occupation he lived under the porch of that same property. The reason for the few words was the toothache I felt at the time of the conversation.

And it’s not just him who needs health care. There is a pregnant woman on site and two children. “Will they have the courage to do this? There are even children here. Where are we going to go?” Yula completed.

The occupation has been in existence for six months. The building where they are is listed as a municipal heritage site for being historic. At least in the last two years it was used as a prostitution house, closed due to the pandemic. 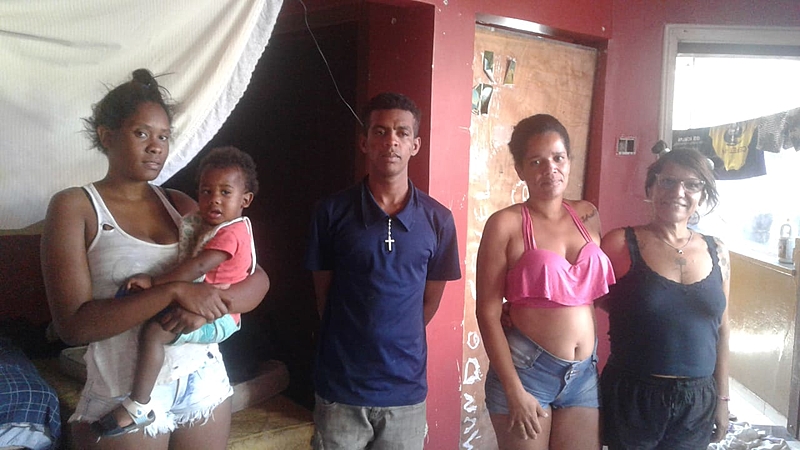 Occupants deal with loss of income during the pandemic / Marcelo Gomes

Earlier this Tuesday, the occupants are leaving the place to go to the new, temporary housing, which is in the forest district. Everyone decided to go peacefully. The eviction operation was organized by the Military Police.

The process that took place in the Judiciary of Minas draws attention. First, because the last decision, of first instance, granted by judge Ronaldo Batista de Almeida, was under secrecy. In justice, the confidential processes are only those in the Criminal sphere. Civil cases are open, except in four cases, according to the Code of Civil Procedure (CPC): if they are family cases; where there are personal intimacies exposed; as well as, the process is being conducted by arbitration, that is, when a third party mediates the conflict. The case of occupation does not fit these circumstances.

But, there is a fourth point in the CPC that opens a loophole for any civil process to be confidential. It is the public interest of the conflict. Although the situation of the occupants has a social character, the process itself involves only Localiza and them. In principle, therefore, there are no grounds for confidentiality.

The newspaper had access to the documents of the process. In the judge’s two-page verdict, the legal basis for the forced removal is the fact that the building belongs to Localiza.

It was based on this argument that the public defender of the State Defender’s Office, Cleide Aparecida Nepomuceno, appealed to the higher instance of the TJMG to annul the eviction. However, judge José de Carvalho Barbosa maintained the expulsion.

His main argument is that “all the requirements set out in the sole paragraph of art. 995 of the CPC”. Such requirements would be the serious damage that may occur in the event that the first decision causes “risk of serious damage, difficult or impossible to repair”, according to the CPC. Legal sources consulted question whether there is greater harm than families taking to the streets.

“In conflicts like this, there must be a conciliation hearing. The law itself provides for a mediation instance and provides for a conciliation hearing to be held. And the state body for this is the Negotiation Table”, explained Cleide Aparecida. Also according to her, another possible solution, existing in similar cases, would be for the property owner to pay rent for a certain time to the occupants, as happened.

This Monday, the Executive of the capital decided to intervene in the case. The Municipal Attorney’s Office informed the TJMG of the need to extend the period of eviction so that the occupants can be enrolled in shelter actions. The main one would be the Housing Grant. Although the expulsion took place, the Executive keeps its promise.

According to the Annual Budget Law of the city hall of the capital, R$ 666 thousand were programmed for this aid last year (DOM – Official Gazette of the Municipality). For this year, an expense of R$ 350 thousand is planned. A reduction of approximately 54% year over year. The amount allocated to the action in 2021 would supply less than 60 people, receiving R$500 monthly, which is the scholarship’s value, for a year.

According to data from the UFMG’s Polos da Cidadania project, there are 8,840 homeless people in Belo Horizonte. It is good to remember that in the same region of occupation there are two others, which demonstrates the need for the program.

The Social Worker who follows Anyky Lima’s case, Regina Paredes, is severely critical of Mayor Kalil. “He promised before the elections to assist 800 people with the Housing Grant. According to data from Urbel, which I have, since 2018, only 684 people are registered to receive aid. How is a person going to have dignity without property?”, he criticizes.