An action by the Civil Police of Santa Catarina closed, this Thursday morning (2), the Panzer Militaria store, where objects that refer to Nazism were manufactured, in Timbó, in the Itajaí Valley, in the interior of Santa Catarina.

At the scene, agents found several items, such as flags, mugs and stickers with the swastika, as well as the Nazi Party’s symbol eagle and a bust of Adolf Hitler.

On June 7 of this year, the Public Ministry of Santa Catarina opened an investigative procedure on the sale of items that refer to Nazism on the Panzer Militaria website.

The company violated Law 7716 of 1989, which prohibits the acts of “manufacturing, marketing, distributing or conveying symbols, emblems, ornaments, badges or advertising that use the swastika or swastika, for purposes of publicizing Nazism”. The penalty is two to five years of imprisonment and a fine.

The owner of Panzer Militaria, Rodrigo Eduardo Abiuzzi Moreno, is in Portugal and has not been arrested, according to a spokesperson for the Civil Police. On site, there was a lounge, which apparently doubles as a bar. Above the balcony, a painting, in which Hitler appears in the center, surrounded by several Nazi soldiers. 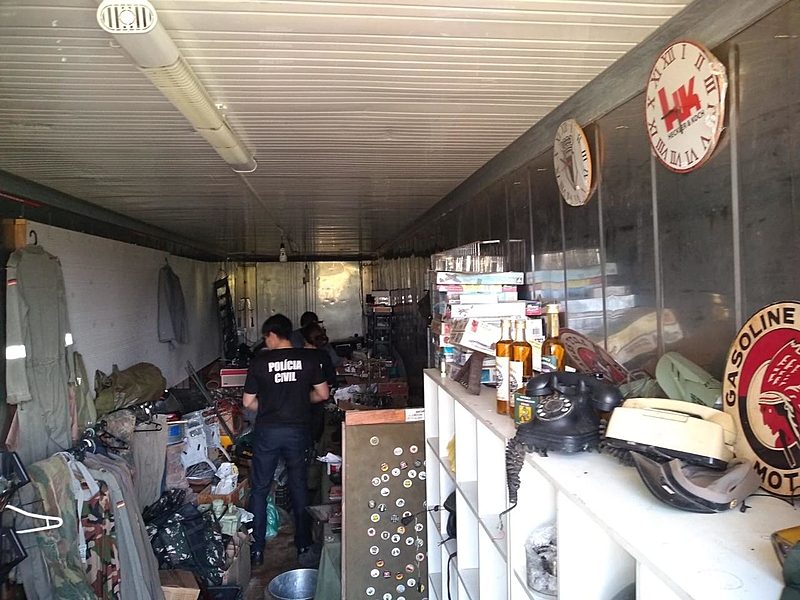 At the back of the house, there were two containers. In them, the police found items that allude to Nazism and that are sold on the Panzer Militaria website. In addition to the bust of Hitler and military clothing, there was material for making ammunition.