Under the management of Romeu Zema (Novo), public communication in Minas Gerais went from bad to worse. And not even the law manages to stop the governor’s disregard for Rádio Inconfidência and Rede Minas.

For three years, civil servants have had their salaries frozen

Data obtained from the Minas Gerais Transparency Portal show that from September 2019 to September 2020, the government of the state of Minas Gerais allocated only 0.83% of the amount spent on advertising to broadcasters.

According to article 130 of Law 23,304/19, the Minas Gerais Communication Company (EMC), an entity that encompasses Rede Minas and Rádio Inconfidência, must be reserved, “three percent of the resources destined to government advertising, including those destined to agencies and direct and indirect administration entities and state-controlled companies”.

As a result, the government’s debt to Empresa Mineira de Comunicação, from 2019 to 2020 alone, is around almost one and a half million reais.

Spending on EMC / Government of MG 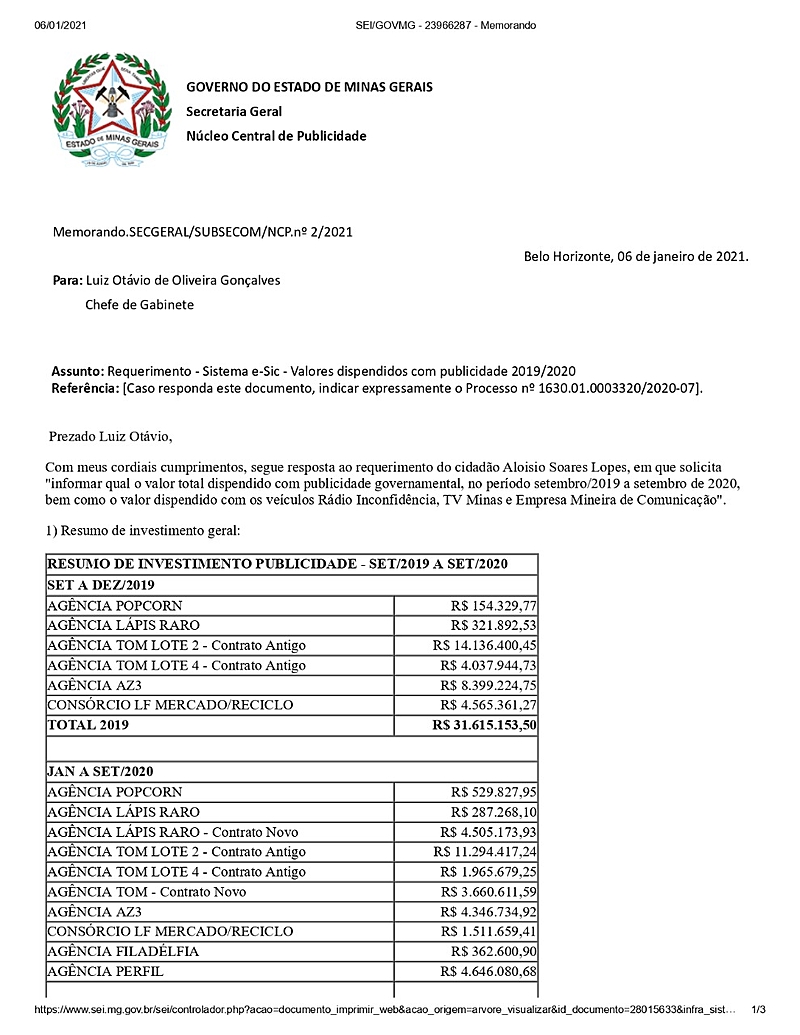 Spending on EMC / Government of MG

The data were requested by the journalist and member of the National Forum for the Democratization of Communication, Aloisio Lopes.

“The governor vetoed this article of the law, however the ALMG overturned the veto. But Zema insists on violating a constitutional right. This is just one of the countless examples of the government’s disregard for public communication”, denounces the former advisor to the TV Minas Board of Trustees.

“Since I was a member of the TV Minas Board of Trustees in the previous administration, I think this information is essential for us to continue following, inspecting and exercising citizenship over the State’s communication policy,” he adds.

Since the last 2nd, the workers of Rádio Inconfidência have been standing idly by, on strike against the approval of the Plan of Positions and Salaries proposed by the government. The PCS, which did not undergo consultations with workers, proposes a restructuring of positions and careers, increasing the inequality between public examinations and commissioned employees.

For three years, civil servants have been with their salaries frozen. Despite this, last year EMC’s leadership positions had an eleven-year replacement from the INPC. As a result, the gross salary of only 18 employees commissioned by the Company consumes around 40% of the radio’s expenses with payroll.

In addition to scrapping and attacks on workers, another characteristic that has become a hallmark of Zema’s management in public communication is the lack of transparency.

No transparency: last public minutes of the Board of TV Minas is from August 2019

To give you an idea, the last public minutes of the Board of Trustees of TV Minas is dated August 2019. However, the document is not available for download, making it inaccessible. Among other attributions, the entity is responsible for proposing and approving the issuer’s accounts. In May 2022, the current administration ends its cycle without the population having any access to the decisions that were taken by the entity over these three years.

Minutes of the meetings / Rede Minas

All this information was shared during a meeting organized by the National Forum for Democratization of Communication – FNDC/ MG in partnership with the Professional Journalists Union of Minas Gerais/ SJPMG, which took place on the 31st.

At the meeting, a working group was created so that the Forum can continue its actions in defense of public communication in Minas Gerais. Among the activities, it is planned to prepare a censorship dossier – like the document organized by Empresa Brasil de Comunicação – to denounce the governor’s interference in the broadcasters’ programming schedule.