This Friday (8), at the Criminal Forum of Belém, located in the Cidade Velha neighborhood of Belém, capital of the state of Pará, Boaventura Dias de Lima, 55, was sentenced to 25 years and 6 months in prison in closed regime for the murder of Leila Maria Santos de Arruda. A member of the Workers’ Party (PT), Leila ran for mayor of Curralinho, in Marajó (PA), in 2020.

The trial started at 8 am and ended at 3:50 pm. Prosecution and defense witnesses were heard, as well as the prosecution and public defender. The defendant was taken to the popular jury, which ​​​​​​recognized that he committed aggravated homicide for a futile motive with the use of cruel means. The defense stated that it will file an appeal.

The judge responsible for the case was Cláudio Hernandes Lima and among the witnesses were the victim’s relatives, children, and the murderer’s sister.

Leila Arruda was 49 years old. She ran for mayor of Curralinho getting more than 3,000 votes. / Reproduction / Facebook

“I just don’t remember how many stabs I stabbed her”

According to the prosecution’s allegation, as soon as he was arrested on November 20, 2020, Boaventura Dias de Lima told the military police, still altered: “I just don’t remember how many stab wounds I took in her.”

In the report, ten blows were confirmed on the victim, and the kitchen knife – used in the crime – broke during the attacks. The 49-year-old woman also suffered head trauma from a severe blow to the head, which could have been caused by a thud or kick.

In addition, Leila was stabbed in the face, neck and had marks from knife blows on her hands, which indicates that she tried to protect herself from aggression.

The victim’s brother, the former mayor of Curralinho (PA), José Leonardo dos Santos Arruda, who was heard as a witness for the prosecution, says that on the day Leila was murdered, she posted a photo with a new boyfriend on Facebook.

Read also: Candidate for mayor of Curralinho, Leila Arruda is a victim of femicide in Pará

The couple had been separated since 2017, that is, for five years, and they lived for about 22 years in a stable relationship.

Leonardo Arruda, the victim’s brother, also reported that the accused was known to be jealous and that in addition to “not liking to work”, he commonly humiliated the victim in public. “She was the breadwinner for the family, he didn’t cook, didn’t take the children to school. The excuse was that he said he couldn’t do anything,” he said.

The defense tried to maintain that the ex-partner suffered from depression. However, no history of treatment for mental illness by Boaventura Dias da Lima was confirmed. 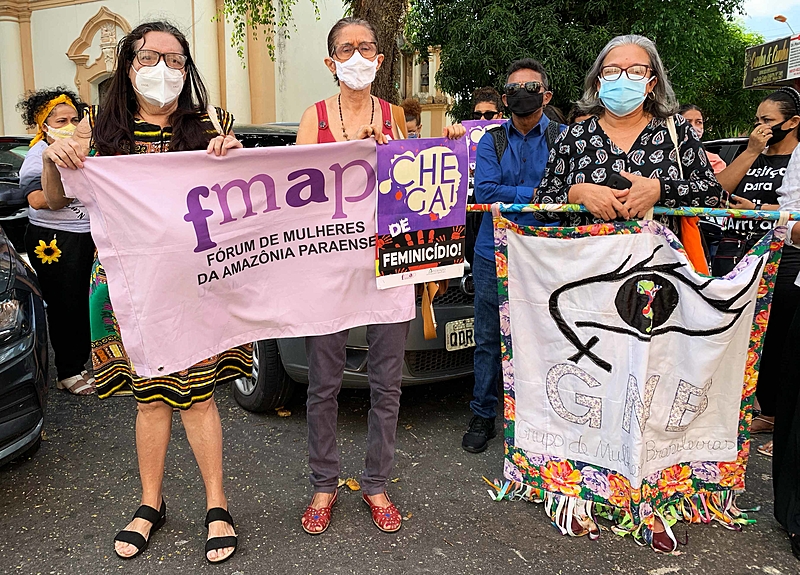 Amazon Women’s Forum affirms that the act is a response to society that the movement is vigilant to all violations against women. / Catarina Barbosa/Brazil de Facto

Act promoted by the Women’s Movement

For Eunice Guedes, from the Women’s Forum of the Amazon in Pará, the presence of the movement in front of the Forum was essential to demonstrate that women are vigilant to all violations against women.

“We cannot accept the situation of violence that women live in Pará, in Belém. Leila was an important person for the movements, important for the struggle and was cowardly murdered. Like Leila, many women are murdered in Pará “.

Regarding violence against women, Eunice Guedes explains that there is a process of negotiation and permanent discussion with the bodies and with the women’s care and protection network in Pará.

“We need this net more and more, which is actually a worn out, perforated manatee net (large fish), but which should be a bird net (tiny fish). It had to be well tied. , but we know it doesn’t work”.

According to her, the goal is to create more shelters for women and more police stations.

On July 28 of this year, Law 14,188 was passed, without vetoes, which includes the crime of psychological violence against women in the Penal Code. The penalty is imprisonment, between six months and two years, in addition to payment of a fine.

the day of the crime

The victim’s brother, the former mayor of Curralinho (PA), José Leonardo dos Santos Arruda, was the first to find the victim, already lifeless. “when I entered the house [da vítima] I realized that she was on the ground and when I went to her, she was dead. That’s when I noticed several punctures on her body and immediately called the police,” he says.

:: A woman is killed every nine hours during the pandemic in Brazil ::

In addition to the brother’s testimony, the photos in the expert’s report prove the violence with which the act was committed. The thesis is that the argument between the two began in the garage of the victim’s house where there was blood, however, there were marks of aggression on the house’s cabinets, refrigerator and walls of the residence.

The report also points out that there was a drip of blood, that is, the victim crawled and tried to escape from the aggressor, but ended up “dying suffocated by his own blood”.

The defendant’s penalty was aggravated due to premeditation of the case. According to the victim’s own son, Breno Arruda, Boaventura was wearing his clothes when he was arrested. That is, after murdering the victim, he changed his bloody clothes, showered and dressed in his son’s clothes.

“When I got home, the police wouldn’t let me in. I just saw him [o genitor], at the police station with my clothes and my mother, I only saw her at the wake. The day I learned of the crime, I knew it was him, because my uncle called saying that my father had shown up with bloodstains and wounded asking about my other cousin who is a lawyer. We always knew he could do something, we just didn’t know he would do it,” he said in a statement.

In addition, Boaventura made a copy of the key to the victim’s house, hidden from his son, and entered the house’s garage door and waited for Leila to appear.

In testimony, the killer reported that he only has elementary school and worked as an application driver. About the crime, he claimed amnesia saying he “doesn’t remember what happened” and added: “since I was arrested there has been a hole inside me”.

When she was murdered, the victim had a protective measure against her former partner, who was not complying with it.

With the sentence, the youngest son of Leila and Boaventura, Brian Arruda, said that if the result was expected, but that no one can undo the tragedy. In addition, he says that there were years of living with the aggression of the man, who he currently calls “parent”.

“He not only committed murder, but also premeditated, my mother was a warrior woman, a strong woman, enterprising like so many other women across the country who have to support their family and still go through aggression at home.”