The state capital will host the first Hip Hop Culture Museum in Latin America. The space for valuing the memory of this cultural expression of the outskirts that developed denouncing multiple forms of violence, especially racism, is scheduled to open in March 2022.

:: Emicida and the art that interprets Brazil ::

It will offer training activities, after-school workshops in Hip Hop, DJ, MC, graffiti, dance and slam, as well as a community garden, a multi-sport court and encouragement of street sports such as skateboarding, basketball, soccer, volleyball and other areas of interest of the community where it operates.

Fruit of a collective construction led by the Hip Hop Culture Association of Esteio (ACHE), the space was idealized by the rapper, a Hip Hop and black movement activist in Porto Alegre, Rafael Diogo dos Santos, better known as Rafa Rafuagi.

“The Hip Hop Culture Museum is born from a desire that crosses generations, comes from a generation that pioneered the Hip Hop culture in Rio Grande do Sul, the breakers, DJs, graffiti artists and MCs who occupied the Democratic Corner, as well as spaces in the Interior, which also began following Porto Alegre”, he says.

Hip Hop Culture House, in Esteio, during one of the actions to deliver food baskets in the midst of the pandemic / Photo: Instagram ACHE

In an interview with Brazil de Fact RS, he explains that the realization of this desire to preserve the history and heritage of Hip Hop values ​​the path already traveled and serves as an example to the younger ones. “A space where our stories can serve as an example to other young people, who also come from the periphery and have the same difficulties as other different periods of life due to historical problems such as racism, machismo or homophobia, which are major themes. debate within the Hip Hop culture.”

According to Rafuagi, who is ACHE’s Self-Management and Sustainability Coordinator, the museum aims to intensify the fight against problems caused by colonialism, patriarchy and why not capitalism. “We want to bring a perspective of solidarity economy, a perspective of collective work in a network, valuing black ancestry and looking in the past for elements that subsidize us to build a future, thinking about a proposal for a decade plan for the peripheries based on the museum .”

The building where it will be installed, an old state school in Vila Ipiranga (Rua Parque dos Nativos, 515), in the North of Porto Alegre, was provided by the city hall of the Capital. The rapper emphasizes that the project will involve the community, citing the example of the community garden. “This will work directly with the community that lives around the public facilities, so that we can be included in agendas, family farming fairs, and also bringing these people into the Hip Hop culture.”

Museum is the result of collective organization

“As the first Hip Hop Culture Museum in South America, and perhaps we will open even before the Bronxs Hip Hop Museum, which is being created in the United States, we know the responsibility that is because there is no booklet guidance for us to create a project of this magnitude”, he says. According to him, the process is one of trial and error, taking into account issues that are very dear to them, “such as generational balance, gender balance, race balance, valuing diversity within the project.”

The materialization of the project comes from the organization and collective struggle, from debates that emerged in 2010, taking as an example the realization of the first Hip Hop Culture Week, held in 2008 in Porto Alegre. The initiative became a reference for other cities in Rio Grande do Sul to also organize themselves into collectives and take proposals to municipal legislatures, officially approving events in the municipalities’ calendar.

“From then on, this more collective form of organization was what made the Hip Hop movement in Rio Grande do Sul once again to be at the forefront of the national scene. And also obviously, generate positive examples from here”, he points out. Rafuagi highlights not only the Hip Hop weeks as one of the biggest festivals of Rap and Hip Hop culture in the state, but also the realization for ten years of one of the biggest dance battles in Brazil and also in South America, the Battle In The Cypher (BITC), in Bento Gonçalves.

“Not for less, we also have several Hip Hop associations with CNPJ, in an organized legal way. Obviously understanding that this historical context was what made possible the project of the Hip Hop Culture Association of Esteio, together with all the entities and ambassadors that are part of the research, the articulation, which are many and I prefer not to mention names so as not to forget to none, but there are many that are part of this construction”, he says.

Hip Hop as a tool for dialogue with youth

About to complete two decades of artistic and social work, Rafuagi believes that music and Hip Hop culture can contribute in a very didactic way to confront racism, the historical social exclusion of Brazilian cities and other problems in the country. As an example, he cites the Porongos Manifesto, launched by the Rafuagi group, of which he is a part, which served as a pedagogical subsidy for educators to work on the history of blacks in schools.

“The history of the black spearmen is until today made invisible, denied and omitted within the schools”, he points out. He attributes to the deliberate forgetting of part of history the creation of false myths that become the basis for repetitions of historical problems. “Not for the least, we see historical things happening, referring to their own pocketbook.”

Rafuagi says that Rap music has the power to dialogue more easily with youth, often bringing the discourse that the teacher brings and is often not understood by young people, whether due to a distance of age or dialect and expressions. “This is important, I think music has this power, the Hip Hop culture has done this, I mentioned an example, but there are several, Emicida himself, with the documentary AmarElo, now on Netflix. And so many other examples throughout Brazil and around the world.”

Connecting the academic to the popular 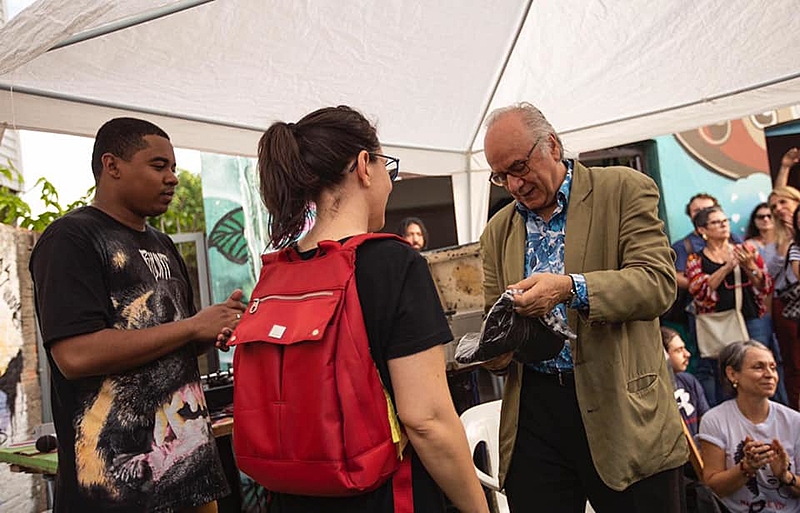 ACHE was founded in 2011 to help spread the movement. In 2017, they opened the Hip Hop Culture House in Esteio, developing various activities with young people and the community in general. One of the successful events before the pandemic in the area was an extension course of the Popular University of Social Movements, the UPMS, an initiative that was born at the World Social Forum, the result of the desire of social movements together with academics concerned with a new possible world.

The rapper recalls that the meeting, which included the participation of Portuguese sociologist Boaventura de Sousa Santos, put into practice this possibility of bringing together academics and popular people. “It was a combination of the Association with the Institute for Assistance to the Remaining Communities of Quilombo do RS (IACOREQ-RS) and other leaders who are not directly linked to collectives, but are community leaders, social movements, artistic groups. We had the participation of more than 50 people who come from the social struggle, the artistic struggle and movement leaders”, he says.

For Rafuagi, the space provided by UPMS showed that the academy and the popular are not opposite worlds and should be increasingly closer together. “UPMS is part of a tripod of projects that we believe can really transform Brazil, which has the Hip Hop Culture Houses as its base, reference centers for youth, working directly within the communities, offering a counter shift and a series of possibilities for critical and economic emancipation, making these young people really citizens”, he says.

Having the popular University as the backbone, empowering leadership, and acting in communities, the rapper emphasizes that this action tripod is based on the museum. “It is the space for valuing this memory and the social struggle built in Brazil, which is very dear to us and obviously we are here to continue honoring this ancestry.”

The construction of the museum is in the historical research phase of the Hip Hop culture to assemble its permanent collection. Since the beginning of July, the project has been selecting ambassadors in the nine functional regions of the state to actively participate in the historical recovery of the culture’s production and take part in this elaboration of knowledge.

There will be a total of nine forums for mapping and collectively building memories and records with ambassadors, held virtually in the cities of Porto Alegre, Caxias do Sul, Passo Fundo, Pelotas, Santa Maria, Santa Cruz, Santo Ângelo, Esteio and Tramandaí.

“The Museum will be in addition to a physical space, an immaterial space, which will serve us to tell our own story, the way we live and feel the Hip Hop Culture in a state that systematically erases the history of those who live on the margins For this, we will use as a rescue strategy the collection that is being collectively built through the Historical Research, hence the importance that everyone who contributed to the growth of Hip Hop Culture in RS participate in the Forums and help spread what we are doing”, points out Geovane Neves, general and administrative coordinator of ACHE

ACHE highlights the urgent need to rescue and preserve the history of culture and the makers of the Hip Hop scene in the state, recording its legacy and importance in the local scene, such as Malu Viana, MC Flor do Guetto, who died in early July , who was part of the museum’s research team. The organization highlights the performance of Malu, who was one of the first women to rap in Brazil and was present in the main fights of her generation:

“It has organized Hip Hop mobilization fronts since the late 1980s; collaborated with the Youth Project of Instituto Cidadania and Perseu Abramo Foundation; it was an outstanding presence in the first editions of the World Social Forum, helping in its construction and, thus, in the dreams of another possible world; acted in the organization of the 1st National Meeting of Black Youth and the National Forum of Black Youth; she was the Coordinator of the Youth Live Plan; joined the ranks of affiliates of the Unified Black Movement (MNU) last year. In recent years, he had been collaborating with the Perseu Abramo Foundation in the Perseu Reconnection Project, where his performance was marked by the outstanding enthusiasm that was characteristic of him when he believed in an idea. He never left the fighting trenches, he was Hip-hop’s MC, an anti-racist and progressive black activist until the last day of his life.”