Every day, delivery worker Adriano da Costa leaves his house before 9 am, takes two buses to Paulista Avenue, and takes the electric bike from the iFood app late in the morning.

“I start deliveries between 11 am and 11:30 am”, the resident of the Vila Nova Jaraguá housing estate – in São Paulo’s capital western region – says.

iFood allows workers to rent bicycles for up to four hours, at a weekly cost of R$24 (around US$5), with the right to two pickups per day.

“So, I use the bike for four hours, return it, and take another one later in the evening, at dinner time, to use it for another four hours.”

During the afternoon break, Adriano rents bicycles from Banco Itaú to continue delivering meals. In this case, the vehicle is not electric, which makes the journey even heavier.

It’s an average of ten hours of work a day, and the commuting time makes him stay away from home all day long. When he returns home, it is past midnight, and he is exhausted.

For about a year and a half, Adriano’s monthly wage as an app delivery worker has been an average of R$2,800 (about $500). He himself pays for transportation and food costs throughout the day.

Although there are divergent decisions, the Brazilian Court does not usually recognize an employment relationship between workers and apps.

The lack of specific legislation in the country generates legal instability and means that they are treated sometimes as self-employed workers, sometimes as independent, and more rarely as formal workers, according to Brazil’s Consolidated Labor Laws.

“In some cases, there is a delivery of 5 km or 7 km for us to cover under the hot sun. This mileage should be for motorcycle only. The limit for us should be 4 km,” he says.

“And, sometimes, they pay R$7 (about $1.3) for 6 km. It doesnt pay off. If a guy spends 30 minutes waiting for the order to be prepared by the restaurant, he loses [a total of] one hour to make the delivery.”

Questions about the amount paid for each delivery are the most frequent among delivery workers.

João Francisco* works 11 hours a day in Belo Horizonte, in the state of Minas Gerais, and says that there was no proportional price adjustment to the increase in fuel prices in the country.

“I moved to a new house. I had to move into a more remote neighborhood because I couldn’t pay the rent. Depending on the day, I do the calculation and see that I’m paying to work. There’s no money left,” he says.

“I’m just waiting for the first opportunity to be formally hired, whatever job. But, today, if I give up or if I am excluded from the apps, the next day I’ll be begging on the streets,” the delivery worker explains. He has been working for three different delivery apps and chose not to reveal his name to avoid punishment.

In addition to unemployment, the drop in wages in the formal labor market also causes many drivers to remain working for the delivery apps, even though they are dissatisfied with the rates.

Adriano da Costa says that he worked for five and a half years as a forklift operator at Grupo Pão de Açúcar, one of the largest retail chains in Brazil, and his monthly salary has always been lower than his current salary at iFood.

Is it bad for everybody?

The dissatisfaction of delivery workers with the conditions offered by the online delivery platforms has been growing in Brazil. Since 2020, they have been protesting and demanding rights and improvements in working conditions.

The most known protest was the “Breque dos Apps” in July of last year, a national strike with massive participation in São Paulo and other capital cities.

“I’ve already seen several demonstrations. Some people don’t demonstrate because, that same day, they need to make money; they have bills to pay. So, this person wants improvement but won’t stop [working]”, Hadrian analyzed. He has never participated in acts against delivery companies to avoid being excluded from the app.

João Francisco says he tries to “keep far away” from the protests, just as not to be mistaken for a protester – and not put his work at risk.

Their concern makes sense. One of the national strike organizers in 2020, delivery worker Paulo Lima, also known as Galo, was immediately banned from the most known delivery apps.

While delivery workers face exhausting journeys to pay the bills, the situation is also uncomfortable on the other side of the counter.

According to information compiled by Brazil in fact, the fees charged by UberEats from restaurants reach 30% for delivery.

“If we had a choice, we would go back to what it was before, without the apps”, says Luiz Fernando*, owner of a pizzeria in Porto Alegre, in the state of Rio Grande do Sul.

“But today, a pizzeria like ours, which needs to have a large volume of deliveries in order to survive, can’t stay out of iFood or UberEats. Otherwise, the rival pizzerias will run over [us].”

The entrepreneur also prefers not to say his name to avoid “get a problem” with the delivery app companies. 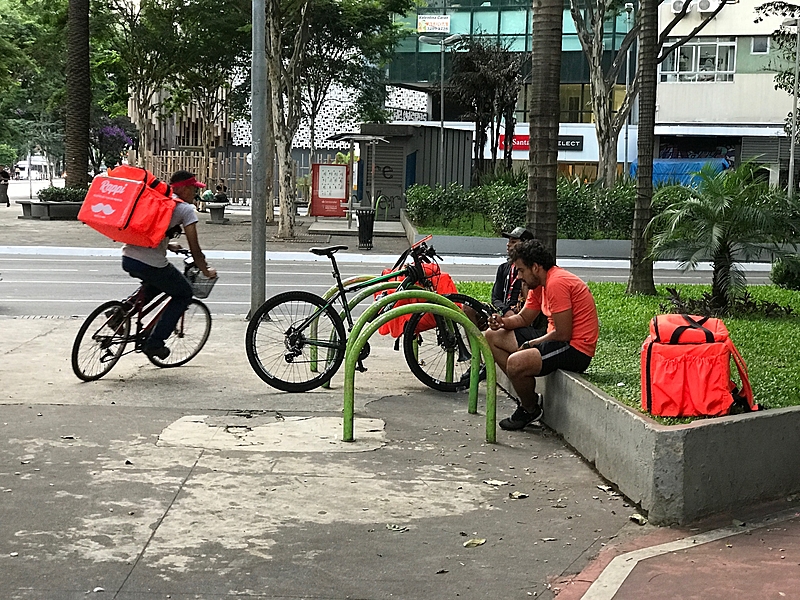 Luiz Fernando recalls that his pizzeria is among the last ones in the city to surrender to the digital delivery platforms.

“There came a time, during the pandemic, that we couldn’t reject it anymore. I saw the neighbor pizzeria, which always had fewer customers, making twice as many deliveries as us just because it was registered in the app. And our delivery employee was there, stopped”, he explains.

Today, this delivery worker, who previously worked only for Luiz Fernando’s pizzeria, is registered in a delivery app and works in the metropolitan region of Porto Alegre.

“These companies end up taking a good part of our profits, but there’s in the other way: if you don’t use the app, you’re not seen, you’re not remembered. The number of orders for night ends up being smaller”, the businessman says.

The National Association of Restaurants estimates that the average share of deliveries in the total revenue of restaurants jumped from 11% to 21% between the beginning of the pandemic and December 2020.

Paulo César da Motta is one of the owners of the Emporium of Aroma Cafe and Restaurant in downtown Curitiba (Paraná state district). The establishment opened a week before the first lockdown in the city, in March 2020.

“We studied the feasibility of registering in delivery apps. But, with the proposals they have, the rates and all the investment that would be necessary with, for instance, packaging, we concluded that it wouldn’t be advantageous”, he says.

Another reason why this choice is unfeasible is that the value of the deliveries would only enter the owners’ bank account 30 days later.

Today, Aroma Emporium is one of the few cafes in the region that survives even without being registered in any delivery app.

“We calculated from the prices they charge and the percentage that we would have to pay for the online platform, and then we saw that it wasn’t worth it,” he says.

After talking to other cafe owners, Paulo César concluded that in a delivery app would generate a sudden increase in customers; however, it would not bring benefits in the long term.

“What we’ve been told is that starting in the online platform always generates a sales boom, which is an illusion. You are in a good position. You think that it will be permanent and decide to make a bigger stock of purchases. But then, new food establishments register in the app, and yours is hidden”, the entrepreneur says.

Another reason for not adopting online delivery platforms is the increasingly precarious work of delivery workers.

“Every work activity deserves decent payment. When we saw that the delivery workers received R$ 3 or R$ 4 for a distance of more than 5 km, we considered that, as in the delivery app, we would be contributing to the labor exploitation – and with a packaging market that was practicing unrealistic prices”, he adds.

The delivery apps do not work with a fixed price by distance or by delivery made. According to iFood, “for each kilometer of the total distance to be covered, a minimum of R$1 is paid to the delivery worker. Besides that, there is an additional fee if you are away from the restaurant. In most cities, this fee is added from 5 km away.”

Today, Paulo César and his partner, Vladimir, carry out deliveries with their own car, but at limited periods, to avoid harming face-to-face service and the product quality.

Emporium of Aroma is an exception in the largest cities of the country. The model delivery by online platform became even more popular because of the pandemic, and protests from delivery workers have had an effect in specific cases.

“The pressure is working,” Altemício Nascimento, a delivery worker, told to Brazil in fact. He followed the iFood negotiations with the group of delivery workers who went on strike in São José dos Campos, in the state of São Paulo, in September 2020.

Besides the readjustment in the amount paid per kilometer or per delivery, the demands were also the end of undue blockages, the requirement for a confirmation code on deliveries, and better resting places.

In São José, delivery workers received three orders from the app at the same time.

“On the 28th, they promised to change the rates and remove the three orders. Because, today, three orders go straight to the delivery worker screen. In other words, a guy can make two free orders for iFood. There’s no way”, Altemius explained.

Inner São Paulo state, the strike was supported by bars and restaurants, which understood the reasons for the strike. At the same time, the delivery workers were open to dialogue. They returned to work after six days, just as not to harm the businessmen.

The delivery workers announced that they will stop activities again if iFood did not keep its promises.
Luiz Fernando, who owns a pizzeria in the city of Porto Alegre, says that conditions will only improve if workers and small businessmen demand rights together.

“It’s a pity that it’s hard to work together on this idea. We’re in the same boat, but in the rush of everyday life, we even argue because some delivery workers are at the restaurant’s door putting pressure on us to prepare the orders faster”, she says.

“The right thing to do is to hire them and find a way to ask for better conditions for everyone. Nobody is having an easy life today”, he concludes.

Brasil de Fato presented the criticisms referred to the delivery app companies. We also asked what the criteria for defining the fees charged to partner restaurants and delivery workers.

UberEats said that the answer would be the responsibility of the Brazilian Association of Mobility and Technology (Amobitec), which brings together nine delivery apps.

“Companies associated with Amobitec are open to dialogue and work to help partner drivers and delivery workers generating gains, including carrying out reviews and adjustments in several cities across the country.

Regarding delivery prices, Amobitec member companies have their own policies about this issue. However, the price of each delivery takes into account some factors, such as the total distance, the time required to cover it, and the demand for deliveries at a specific time and place.

Among the measures adopted by the companies to help partners reduce expenses are agreements with gas stations that offer discounts on fuel, as well as partnerships with companies to offer special prices on car and motorcycle parts, accessories and maintenance.”

* João Francisco and Luiz Fernando are fictitious names because of the delivery worker and the interviewed businessman did not want to be identified.