In an activity alluding to the 50 years of the legacy of the struggle of the Palmares Group and of the 20th of November, as a symbol of Black Consciousness in the country, the Collective of History Teachers of the Municipal Education Network of Porto Alegre (CPHIS), together with the Ponto de Cultura Africana – Center for Research, Rescue and Preservation of Afro-descendant Traditions, promotes on November 23, next Tuesday, at 7 pm, the live launch of the e-book publication “Stories of drums and drummers: Rio Grande, Pelotas and Porto Alegre”.

The live, in addition to highlighting the religiosity of African matrix as one of the black territories of resistance and solidarity, also celebrates the two years of existence of the CPHIS, and has the support of the Association of Workers in Education of Porto Alegre (ATEMPA), which will broadcast the activity on its Youtube page, and on the Porto Alegre Municipalities Union (SIMPA).

Next, you can check the interview conducted by Marco Mello and Fernanda Panerai, from CPHIS, to two of the authors of the work, Jovani Scherer (RME/Porto Alehre) and Vinicius Pereira de Oliveira (IFSul/Pelotas).

What is batuque? And who are the drummers?

The story for drummers and drummers is very important. Batuque is one – if not the main one – of the manifestations of Afro-Brazilian sociocultural resistance in Rio Grande do Sul. This is not, however, an easy question to answer. Perhaps we can say that batuque was being built throughout the historical process of the African diaspora in southern Brazil, since the Colony, and currently survives as a religious manifestation, although probably in Africa it was just life, being lived.

Here, it remained in the form of these African religious traditions, supported by an ancestral connection with the African continent, through the cult and preservation of the memory of its roots by its practitioners: the drummers. These, thus named, in a pejorative way by white society, assume this identity, but above all, preserve these traditions (configured in the Oyó, Ijexá, Jeje, Cabinda and Nagô Nations) at the turn of the 19th century and beginning of the 20th, and constitute since then as groups directly related to their Nation, and with certain sacred practices that differentiate and identify them as such. Its main identity refers to the cult of African Orixás.

RS is the Brazilian state, according to the 2010 Census (IBGE), with the highest percentage of people self-declared as adherents of African-based religions. But stigmatization and sometimes persecution persists. What is the origin of these practices of religious intolerance?

As babalorixá Baba Diba de Iemanjá puts it, Batuque has been the “highlight” of Afro resistance, in a region of strong symbolic and practical racism. The stigmatization in Rio Grande do Sul stems from the profound lack of knowledge that persists today about Afro-religious practices and the history of their formation. Traditions of an African matrix go hand in hand with the process of arrival of African populations in diaspora, therefore, they have always been present in Portuguese America and, therefore, in Rio Grande do Sul, it was no different.

In the specific case of Batuque and other traditions related to it, the current intolerance echoes ancient tactics of associating the African and Afro-Brazilian sacred with illicit practices, alleging that the belief in orixás, caboclos and other deities are aimed at deceit, or enrichment of the priests.

On the other hand, in the 19th century the different contexts of repression and control by authorities, in cities such as Porto Alegre, Rio Grande and Pelotas, engendered the current configuration of Batuque, that is, Afro-Brazilian populations presented a creative solution to growing restriction that they suffered and formed a new religious configuration. This emerges as a social place to welcome the poorest, who had no one to turn to for their spiritual and physical anguish, but that the saint’s father and mother start to welcome, help and treat in its most varied dimensions. 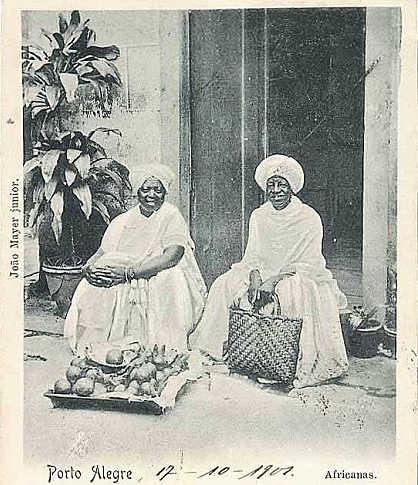 Structurally, the book highlights the “sementes do Batuque” in RS from the 16th century. XIX, and Rio Grande and Pelotas gain prominence. In the second part, the black territories in Porto Alegre are highlighted: Areal da Baronesa, Colonia Africana, Mont’Serrat and region. What will readers find in this section?

In a way, the book proposes an approximation with the experience of the individuals who institutionalized Batuque, that is, they participated in the moment when the houses of the Nation began to have rituals, a more organized calendar, with some regularity, from the fixation in a specific territoriality, known as Black Territories. The idea, therefore, is to present the reader with sources that allow this approximation to drummers considered by oral tradition as the roots of current Batuque.

We therefore understand that the history of Batuque must be seen from the perspective of these leaders, each with their own specificities, contributing to avoid the homogenization of characters in African and Afro-Brazilian History, which is one of the most important issues to be tackled in Education for ethnic-racial relations. We also sought to provide readers with a view of some other aspects of the daily life of these territories of resistance, in which a variety of resistance practices were experienced, such as sociability in black football clubs and leagues, for example. For this, we seek to explain the ways in which black territories were being built in the face of the city’s dynamics and how they were, over the decades, being progressively attacked and displaced to the city’s geographic periphery.

Religious authorities such as the legendary Príncipe Custódio, Mãe Rita, Antoninho de Oxum and Mãe Andreza come to life in the pages of the book. What is the importance of this rescue, considering the context in which we live?

We understand that the importance of rescuing and valuing the role of these leaders has a double meaning. Firstly, for the drummer’s memory and identity, since this religiosity is based on the notions of tradition and ancestry, in the cult not only of the orixás, but also of human ancestors. These former leaders of the various religious families (the basins of each nation) are constantly used in the Batuque memories as models and examples of life and knowledge, and revered for having provided, to those who came later, the permanence of the Batuque culture.

On the other hand, we believe that rescuing flesh-and-blood characters, with first and last names, is a fundamental exercise in breaking with the invisibility of Afro-descendant populations in national history. They were not just “blacks, blacks”, “Africans and Africans”, but people who built a history of struggles, choices, and faced the challenge of religious and social racism to become references for an entire community. The fact that many of these main leaders were women should be highlighted, given the permanence of a patriarchal culture to this day.

In times increasingly marked by intolerance towards difference and by criticism of the recognition of the diversity that constitutes Brazilian culture, pointing out such perspectives acquires a political dimension of struggle for rights and equality.

Antoninho da Oxum, Oyó nation, and a resident of Mont´Serrat, was one of the most famous babalorixás in Porto Alegre in the first half of the 20th century / Photo: Reproduction

The work stands out for its lightness of writing, attractive layout and, from a historiographic point of view, for its diversification in the use of period fonts, maps and precious iconographies. It also includes teaching suggestions and resources for use in the classroom. An unusual feature among productions of this nature. What motivated you to do something like that?

The book appears with the proposal to reach a wide audience – drummers, social movement activists, teachers and students of basic education and scholars in general. And the central axis was the concern that it could be an informative and reflective instrument of pleasant appropriation. In particular, we think of the school audience, which could not be different as the three authors are school teachers.

In this sense, we thought of putting together a text that could be light, that could reach any audience, but without losing the characteristic rigor of the process of production of historical knowledge.

We also thought of offering material that presented succinct conceptual definitions, linked to the contexts studied and that could be used in parts, independently. We present, for example, several small sub-chapters and text boxes with explanation of concepts or processes, something like a “historical glossary”, which can help in the approach of certain contents and which refer, via footnotes, to the bibliography and documental sources for deepening.

In this way, we thought of enhancing the analysis of historical sources in History classes, in which teachers and students can operate by reading and analyzing the information presented (images, conceptual framework, documents, etc.), which we understand as a moment of effective production of knowledge.

Considering the constitutional guarantee of the secular nature of public education and at the same time the threats to curtail freedom of belief, expression and even teaching, what is the role of the school in relation to religious culture?

Public education is committed to offering individuals in training a broader range of experiences and knowledge that can go beyond that offered in the family sphere in which each one of them is inserted. In this sense, the school does not interfere in family choices, but guarantees respect for the greatest possible number of socially relevant practices in the communities in which it operates.

In this field, African-based traditions can and should be understood as one of the most important expressions of the peripheral communities of Porto Alegre. And to incorporate its study as a phenomenon of belonging to an identity that is part of a larger picture of historical reparation for popular groups and, in particular, Afro-Brazilians who are victims of repressive policies based on ethnic-racial prejudices. To understand the past of these populations, from a perspective that perceives them as protagonists, is to value the history of our students.

A child, a teenager or our public of Youth and Adult Education, upon realizing that the school has opened up to stories about Príncipe Custódio, Mãe Rita and other Afro-religious leaders, will be able to see themselves there too. Perhaps they perceive the school space as a place of belonging, or at least a place of reception, where some may assume that identity as their own, others may know it with lesser distortions. Maybe some will even be able to tell other stories from their memory and drumming experience.

You can access and download the work Stories of batuques and drummers: Rio Grande, Pelotas and Porto Alegre by clicking on this link.

The launch live takes place on November 23, next Tuesday, at 7pm, on ATEMPA’s Youtube channel. 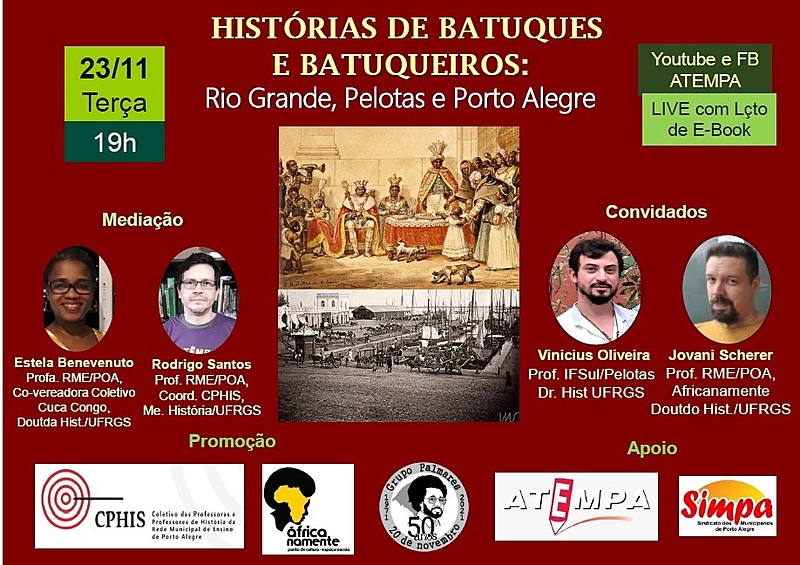