The Supreme Court resumes, on Wednesday (1), the judgment on the issue of the “time frame” of the demarcation of Indigenous Lands (TIs), suspended last Thursday (26). Also on Thursday, the President of the Court, Luiz Fux, confirmed that the case would be resumed as the first item on the agenda because it was a “very important” issue, with a decision this week or in the “subsequent days”.

This understanding, if deemed valid by the STF ministers, may have repercussions on land demarcations across the country. And against this, more than 5,000 indigenous people from 176 ethnic groups have camped in Brasília since August 23rd. A historical fact of the indigenous resistance of our times.

O Brazil de Facto MG she spoke with three indigenous women of the Pankararu, Kiriri and Pataxó ethnic groups, who were present at the “Luta Pela Vida” indigenous camp. They are mothers, grandmothers, wives, workers who ask for their rights to be guaranteed so that their daily lives can pass like that of other Brazilian women.

:: Receive news from Minas Gerais on your Whatsapp. Click here ::

Get to know them:

Its name means snake protecting the white stones. Toá Kãnynã Pankararu is the mother of three daughters, has a granddaughter and lives in Aldeia Cinta Vermelha Jundiba, municipality of Araçuaí (MG). But Toá and his relatives are from another place: “The Pankararu lost their original territory in Pernambuco. As part of the history of aggression against indigenous peoples, my people lost a lot of territory and that’s why I’m here, living in Minas Gerais”, he says.

Toá (right) in Brasília against the time frame and PL 490 / Photo: Personal Archive

The Pankararu people arrived in Minas 50 years ago, and 30 years ago they settled in what is now the Cinta Vermelha Jundiba Village, next to the Pataxó people, on the right bank of the Jequitinhonha River.

Today Toá is an artisan, permaculturist and graduated in Biological Sciences from the Federal University of Minas Gerais. Her name in Portuguese is Cleonice Maria da Silva. She is one of the founders of the Articulation of Indigenous Peoples and Organizations of the Northeast, Minas Gerais and Espírito Santo (Apoinme), created in 1995, and has always been in the fight for indigenous rights.

Toá Kãnynã Pankararu was at the camp in Brasília from the 23rd to the 27th of August. “We are at a very critical moment. We have a covid-19 pandemic, and a coward 17 epidemic,” he jokes, referring to the number of the party for which Jair Bolsonaro was elected. And he completes, speaking very seriously:

“Today our territories are being invaded. The Yanomami people dying of hunger. A child dying of malnutrition, while the gold from their land is on the stock exchange being traded by the banks. Loggers deforesting our territories, drying up our springs, killing our rivers and that has always been the case. We have been defending this land for 521 years”, he says. “We’ve been fighting death forever. Since our country was invaded”.

Toá argues that participating in the camp and fighting for rights are a mission of indigenous women, who are constantly on the front line. “We think about the future of our grandchildren, great-grandchildren, and we want a good country for everyone. Our planet, our mother Earth… we have to fight for her”.

Cacica Apinaera Pataxó from the Encontro das Águas village, in Carmésia (MG), has also been involved in the fight for a long time, in fact, since she was 17 years old. He became involved in the fight for the conquest of the land where today is the Encontro das Águas village, in 1984, where he became a leader. “I like to lead my people with a lot of respect, a lot of love and they also respect me and we live in a family group”, says the chief.

The village had its land demarcated, but the fighting did not stop. The current withdrawal of rights puts all indigenous people in a state of concern, as the chief recounts. 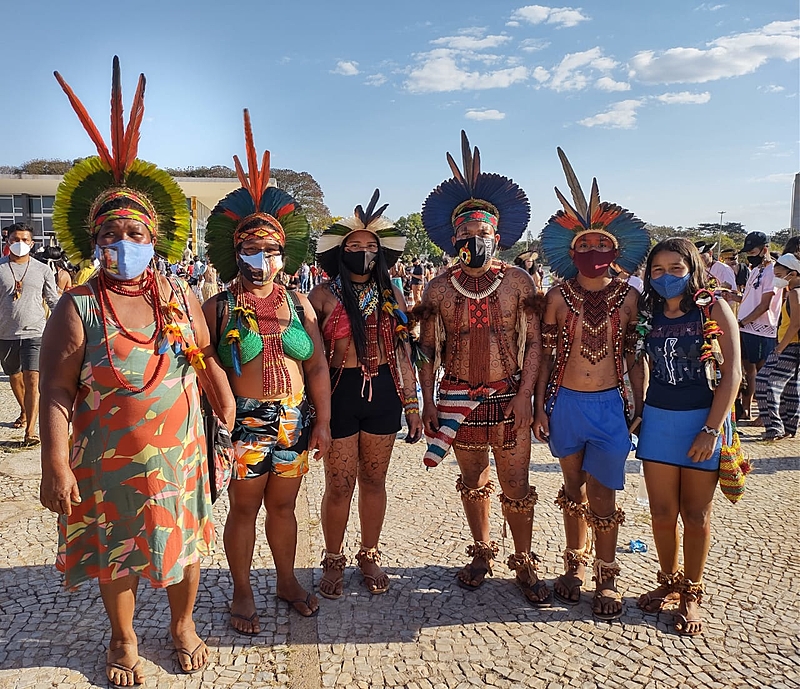 Cacica Apinaera (left) and relatives at the camp in Brasília / Photo: Personal Archive

“We were supposed to have an acquired right without having this fear, this concern. Going to work, seeking our livelihood, sleeping, getting up, getting up in the morning with our community, doing our daily activities without thinking that the big politicians out there are doing this evil to us”, says Cacica Apinaera Pataxó.

“I appeal to everyone who is in favor of the indigenous cause, help us”, completes the chief.

From the south of Minas Gerais, Carliusa Francisca Ramos also left for Brasília. The representatives of the Ibariramã Kiriri do Acre Village, from Caldas (MG), managed to participate in the fight with the support of a fundraising campaign in the city. “Everyone helped us. We managed to stay at the camp for 5 days”, he says.

Carliusa is the principal of the village school, from kindergarten to high school, and is also the wife of Cacique Adenilson de França Santos. The members of Aldeia Ibariramã Kiriri, which today number around 65 people, are from Bahia, but managed to settle in Minas Gerais through a Bill of Law by state deputy Andreia de Jesus (PSOL).

The fear of Carliusa, as well as of indigenous people across the country, is that PL 490 and the timeframe stop the demarcation of indigenous lands in Brazil. Despite having his territory demarcated, Carliusa fears for the other villages. 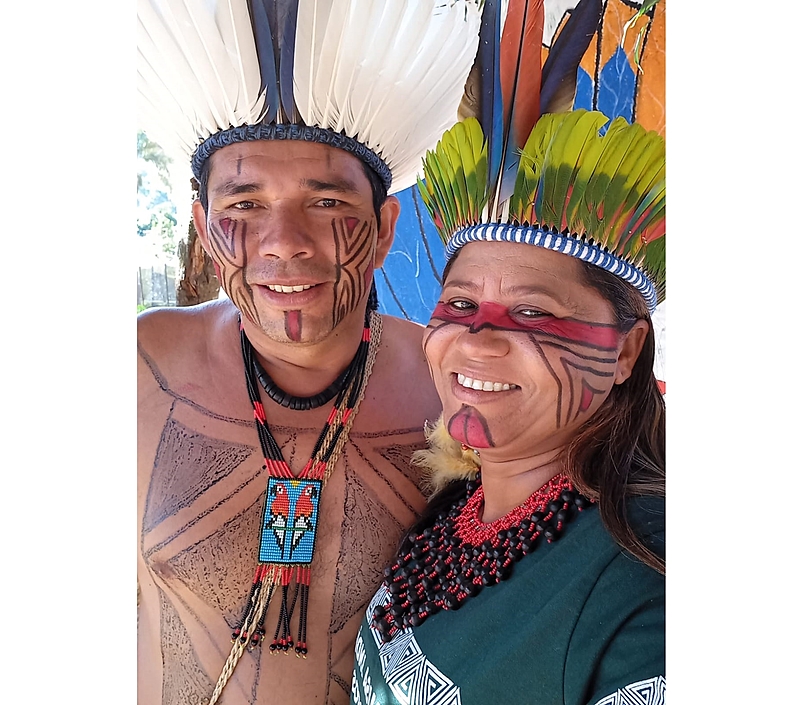 “We went to Brasilia together with our indigenous partners because the struggle belongs to all indigenous peoples, and in defense of our mother nature”, he defends.

This Wednesday (1), when the continuation of the trial at the Supreme Court takes place, Carliusa and the people of the Ibariramã Kiriri village of Acre will not be in Brasília, but that will not stop them from engaging.

And the fight doesn’t really stop. Carliusa and 10 other women from the village will soon return to Brasília, on September 7th, and stay until September 11th. They will participate in the March of Indigenous Women, a mobilization that will involve thousands of indigenous women across the country.