The DataFolha poll released this Friday (17) shows that former President Lula (PT) maintains a comfortable advantage over President Jair Bolsonaro (no party) in an eventual runoff in the 2022 presidential elections.

If the election took place today, Lula would beat Bolsonaro for 56% to 31%. The numbers show a slight decrease in the distance between the two candidates, which was 27 percentage points in June, when the PT was defeating the current head of the Executive by 58% to 31%.

The survey was carried out by DataFolha from September 13th to 15th. 3,667 voters were heard in person in 190 cities. The margin of error is plus or minus two points.

In the four first round simulations carried out by the research institute, Lula takes the lead. The research tested scenarios with Eduardo Leite (PSDB) in place of João Doria (PSDB) and considered names of lesser expression, such as Alessandro Vieira (Citizenship), Simone Tebet (MDB), Rodrigo Pacheco (DEM) and Aldo Rebelo (no party) .

In all the tested scenarios, the PT is between 42% and 44% of the votes, close to a possible victory in the first round. The march of increasing distance over the other candidates, however, stalled in relation to the previous survey.

Rejection of the candidate and disapproval of the mandate

Rejection of Jair Bolsonaro in next year’s election remains high: 59% of voters would not vote at all for president, the highest rate among all the names placed in the 2022 election race so far.

President Jair Bolsonaro continues with his disapproval in an uptrend. She reached 53%, the worst rate in her term. There was a positive oscillation within the margin of error in relation to the record pointed out in a survey carried out in July, of 51% of failure.

The president is evaluated as good or excellent by 22%, a negative variation of the 24% in the previous poll, which already indicated the worst index of his term. 24% consider it regular, the same rate as in July. 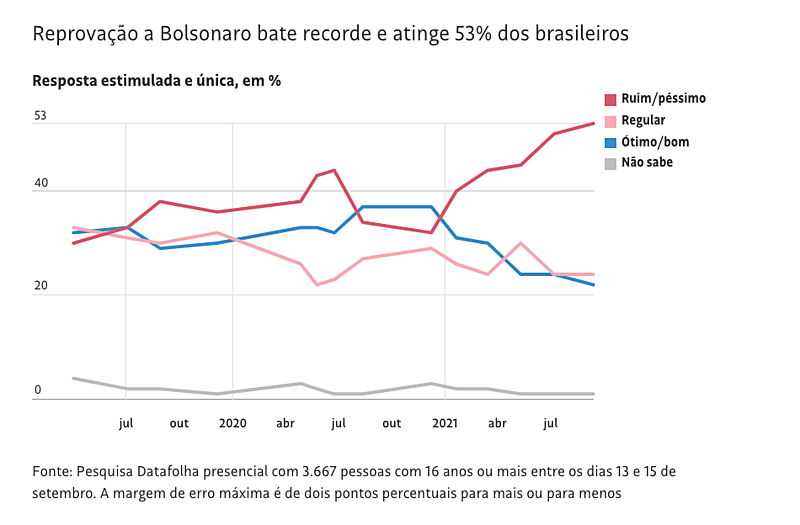 A PoderData poll, also carried out from 13 to 15 September, shows that support for Bolsonaro’s impeachment remains at the same level after the demonstrations in his favor on 7 September. More than half of Brazilians (56%) say they are in favor of the president’s departure from office.

The support percentage has been above 50% since the end of May. The proportion fluctuated in the margin of error of 2 percentage points in relation to the survey carried out 1 month ago, when the greatest support for Bolsonaro’s impediment was registered.

There were 2,500 interviews in 441 municipalities in the 27 units of the Federation. The margin of error is 2 percentage points, more or less.