This Monday (15), Cuba reopens its borders to tourists after a year and a half of restrictions caused by the covid-19 pandemic. Tourism is the main economic activity on the Caribbean island, which suffered an 11% drop in Gross Domestic Product (GDP) during 2020. However, what was supposed to be a day of celebration is now covered by a certain national tension in the face of a new call for opposing acts.

“The situation is difficult, we are making an enormous effort to get out of it and now is a good time. That is precisely why there has been an exponential increase in US actions against Cuba”, comments the Cuban consul in São Paulo, Pedro Monsón.

With the development of five formulas of its own, Cuba managed to vaccinate 70% of the population, equivalent to 7.8 million people including children and adolescents, according to data from the Ministry of Public Health. With the immunization, the Executive assures that it managed to control the pandemic on the island.

:: Cuba and Venezuela announce the creation of a vaccine bank against covid-19 ::

Starting today, tourists will be able to enter the country without restrictions. The government established agreements with 300 airlines to increase the offer of flights. The state will also offer PCR-type tests to certify that visitors are not infected and will provide a booster dose of Sovereign Plus vaccine for those who wish to be vaccinated.

In addition, the country’s ten national airports will be open, as well as 4,000 new hotel rooms were enabled to receive tourists. In all hotels and inns there will also be a medical team to assist visitors.

The opposition, however, does not question the biosecurity measures for the resumption of tourism. Since September, the same NGOs that organized the demonstrations on the 11th of July this year, have called for protests again. The main banners are the right to “freedom” and release of alleged “political prisoners”.

The call for a march in Havana was made in September by Yunior García Aguilera, leader of the organization archipelago (Archipelago). The Cuban government did not authorize the act to take place, considering it unconstitutional.

The argument is that the acts oppose the socialist system, introduced in the country after the 1959 revolution, while the current constitution, approved by popular referendum in 2019, establishes the irrevocable character of socialism in the country.

“The promoters of the acts, their public projections and their links with subversive organizations or agencies financed by the United States government with an open intention to change the political system of our country”, declared President Miguel Díaz Canel.

For the director of the Martin Luther King Center in Cuba, Llanisca Lugo, the demonstrations do not represent the current demands of most Cubans.

“The 15N was built as a symbol abroad, in a very polarized environment. They activated the most emblematic opposition figures to announce an agenda and hide another, larger agenda. The agenda defended is the freedom of rights in a broad sense. And the narrative that stands for behind is very reduced given the complexity of life of the Cuban people”, he analyses.

Cuba is experiencing one of the biggest crises in its history due to the intensification of the economic blockade, imposed since 1962 by the United States. During Donald Trump’s administration alone, 264 unilateral coercive measures were applied. In 2021, the country collected US$ 400 million (about R$ 2.2 billion) less than in the first half of 2020.

The asphyxia generated by the blockade, which according to official data caused damages of US$ 147.8 billion (about R$ 813 billion) to the country, added to the 2300% increase in inflation after the release of the dollar and the restrictions generated by the pandemic. a complex situation for Cubans. 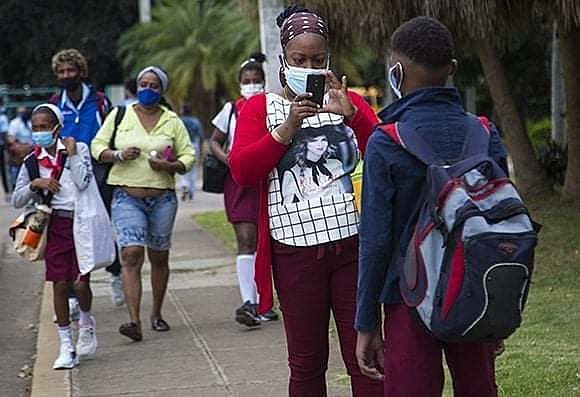 On November 8, 612,000 children and teenagers returned to face-to-face classes in Cuba after being vaccinated against covid-19 / CubaDebate

According to reports from those who live in the country, it is common to have to queue up to 6 hours to be able to purchase basic products. The US sanctions against Venezuela are also causing a shortage of fuel on the island and the return of blackouts, as the main source of energy is thermoelectric plants.

“We are at a time when the crisis and the erosion of revolutionary hegemony have converged and, in this condensation, people are taking the opportunity to promote the agenda of overthrowing the Cuban ‘regime'”, analyzes the representative of Alba Movimentos, Llanisca Lugo.

Despite the opposing banners, Lugo points out that there are also sectors of the arts, culture and academia that have real criticisms and proposals on how to update the Cuban political model.

Also read: Cuba authorizes the use of cryptocurrencies as an alternative to the economic blockade

Since July, when the biggest opposition demonstrations took place since 1994, representatives of the Cuban government have started to meet with different organized sectors of the population to listen to their demands. “The revolution also starts on the periphery,” declared Díaz Canel.

“Cuban society is culturally and ideologically diverse. We cannot demand homogeneity from a people around ideas or principles. We have the challenge of finding ourselves in this complexity of life in Cuba, of building a practice of popular participation that sees the streets as a scenario of the revolution and mobilization as something that belongs to the peoples of the world”, comments Lugo.

For the representative of Alba Movimentos, the extreme situation imposes the need to renew organizational methods to involve youth in the future of the country.

“We need to think about the role of the party and the different popular organizations in Cuba to dynamize and build a new historic bloc that rebuilds the revolutionary consensus”, says Llanisca Lugo.