A youth leader at the Assembly of God of Love Evangelical congregation, in the Bultrins neighborhood in Olinda (PE), Angélica Cruz, 29, is in at least four church groups on Whatsapp. He says that most are for exchanging devotional messages between members and leadership. “The app has become a main communication tool in the pandemic. It serves for us to exchange messages of support and information between the brothers, such as job openings and opportunities”, he told Public Agency.

The intense use of Whatsapp for religious practice strengthens disinformation networks in the Evangelical segment, according to a research report “Paths of Disinformation: Evangelicals, Fake News and WhatsApp in Brazil”, by the Federal University of Rio de Janeiro, published first-hand by public. The report will be launched live on August 30, on the Institute of Religion Studies (ISER) YouTube channel, at 2 pm.

The survey shows that 49% of evangelicals in the sample received messages of false or misleading content in groups related to their religion. This means that nearly half of the evangelicals interviewed received false news from groups in their faith community.

The data considers 1650 responses collected from Baptist congregations and the Assemblies of God and dialogue groups in Rio de Janeiro and Recife. An online form was also applied with people of all religions and without religion. This collection took place in 2019.

In the online survey, with national coverage, people of different religions and with higher education participated – the segment that has the greatest perception in relation to the circulation of disinformation. In this group, the data on receiving false news in groups linked to religion were even higher, with 77.6% of evangelicals claiming to receive misinformation by groups linked to their religion on Whatsapp. In comparison, online data collection showed that 38.5% of Catholics, 35.7% of Spiritualists and 28.6% of believers of Afro-Brazilian religions claimed to have received false messages in their religious groups.

About the use of Whatsapp specifically, the survey shows that among evangelicals, 92% participate in groups linked to their religion on WhatsApp. In comparison, 71% of Catholics, 57% of Spiritists and 66.7% of believers of other religions interviewed said they did the same. “It is not religion that interferes with the greater presence of misinformation in the Evangelicals’ WhatsApp groups, but elements related to the practice of religion, such as the use of social networks”, pointed out the research coordinator, sociologist and director of the NUTES Education Institute in Science and Health at UFRJ, Alexandre Brasil.

One of these elements mapped by researchers would be interpersonal trust. For 33.3% of evangelicals interviewed, people they know are more frequently consulted as sources of information than journalistic vehicles and/or search engines on the Internet. And 13.2% said pastors and church brethren represent the most reliable source of news. “It is important to remember that where information circulates, disinformation also circulates. There is no way to prevent these message flows from circulating separately, as they are intended to appear as reliable information. The intense use of WhatsApp, added to the strong presence of interpersonal trust, are factors that do seem to make evangelicals, at some level, susceptible to misinformation”, explained Alexandre Brasil.

The researcher explains that the research started from the hypothesis that groups where there is greater organicity and trust among the participants are potentially spaces in which there is greater circulation of disinformation. The religious group, in this case the evangelical one, was chosen for having the profile of an “intense community life, the presence of bonds of trust and the holding of regular meetings.” “The existence of reports that indicated sites and influencers linked to the Evangelical segment as prominent disseminators of fake news was also considered,” he added.

The report also emphasizes that Evangelicals are highly representative in electoral decisions, considering that 31% of the Brazilian population declares itself to be Evangelicals, according to the Brazilian Electoral Study (ESEB), carried out in 2018.

Among respondents, 23.6% of evangelicals said they are not used to checking news. According to the report, nearly 30% of evangelicals interviewed admitted that they already share false news, with 8.1% doing so “even though they knew it was a lie, but because they agreed with the approach”.

“The least concerned would be people of older age, less educated, lower income and less skilled in the use of electronic devices (ability to edit video, audio and image content or manage profiles). On the other hand, it is not possible to affirm, based on our data, that people with higher income, higher education and with greater ability to use electronic devices transmit fewer false messages”, explained Alexandre.

Trusting the person who sent the message is enough to forward the false news to other people, says the researcher. “Among the evangelicals interviewed, we identified that, for a third, trust in the sender is the factor they consider to validate a message received as authentic”

With regard to content, 61.9% of evangelicals interviewed said that false news with political themes were the most frequent. Alexandre Brasil says that when the research project was presented, “there was still no perception of the scale and centrality that the dissemination of disinformation would take in Brazil during the electoral process”, when evangelical voters were fundamental to Jair Bolsonaro’s victory. 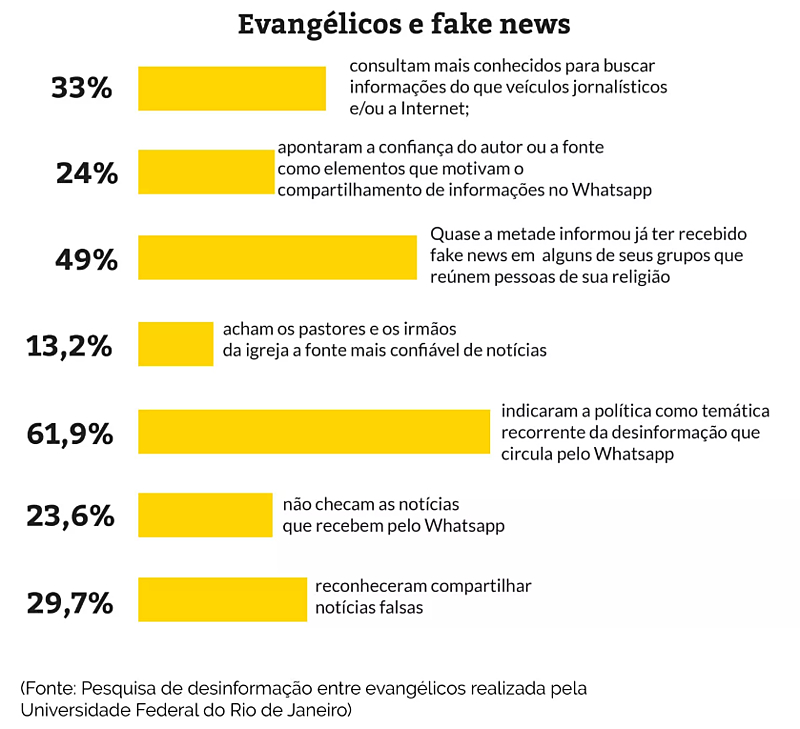 Health was another theme indicated as recurrent. However, the data are not directly related to the picture of “dysinfodemia”, that is, specific misinformation about covid-19 and the public health crisis, because they were collected before the pandemic.

THE public has shown the connections between these disinformation networks, both with conservative evangelicals and with other segments allied to the government. The reports reveal that WhatsApp groups and other social networks continue to be used to circulate false content, such as anti-vaccine advertisements and denial speeches in the pandemic. Also to reverberate attacks on democracy, the defense of the printed vote and other pocketnarist narratives.

The fight against misinformation in evangelical networks has also been carried out by Coletivo Bereia, a pioneer in Brazil in checking fake news in this segment. The initiative of Christian journalists is part of the National Network to Combat Disinformation. “Coletivo Berea was created in October 2019 (the year of data collection for the survey) based on the demand for action that the results of the UFRJ survey imposed. We consider the project a provision of service identified as collaborative journalism for checking content specialized in religion. Since the first month of operation, the results of the public and partnerships have been highly positive, which we attribute to the originality and extreme relevance of this activity”, says Magali Cunha, journalist and researcher in Communication and Religions, who coordinates the collective.

UFRJ researcher Alexandre Brasil says that it is not possible to make a direct association between the results of the research and pockets of disinformation, but he believes that there is “a direction and an investment by the president in relation to the evangelical public”, which represents a important basis of his government and “has mobilized time and concrete manifestations of attention, both in his speeches (by Bolsonaro), in the nominations or signals to the electorate and their leaders, as in the case of the nomination to the STF (of the General Advocate of the Union and Presbyterian pastor André Mendonça), or even in the presence of personalities linked to the evangelical segment in the ministries”.

WhatsApp Group is the new going to church

The UFRJ report also shows that the triad of digital Christian life is made up of applications for reading the Bible, WhatsApp and Google. These are the main applications used by the interviewed evangelicals. And, if going to church frequently is something that characterizes evangelicals, involvement with the faith community via WhatsApp groups has become a differential of this segment in relation to other religious segments and the average of the Brazilian population. “This finding predates the pandemic, but it certainly expanded in this new context. The central point that the report indicates is that groups with similar levels of organization, with strong community life and strong bonds of trust are also more susceptible to fake news”, says Alexandre, who points to the need for an intentional action to train users that act critically in relation to digital media. “The search for a critical reading implies going beyond the ability to use digital tools and involves a broad perspective on reality and the harmful implications that the spread of lies represent. Its threats to public health, people’s integrity and even democracy represent a worrying reality”, he warns.