Not informed by any official record of the presidential agenda, Bolsonaro received von Storch at a meeting that was made public after the deputy of the Alternative for Germany (AfD), the far-right German party, publicized the meeting on her social networks this Monday (26) .

Know more: The ballot box and democracy: what reveals the Pocketist demand for the printed vote

The congresswoman stated that she was “impressed” with Bolsonaro and discussed with him the situation in the two countries. In the publication of the meeting with the Brazilian president, von Storch criticized the anti-racist movement Black Lives Matter and LGBTIQ and said that Brazil can be a “strategic partner” for Germany, alongside Russia and the United States.

Who is Beatrix von Storch?

Granddaughter of Lutz Graf von Krosigk, finance minister in the government of Adolf Hitler, and Nikolaus von Oldenburg, member of the Nazi Party and SA (Hitler’s paramilitary force), von Storch is a law graduate and worked in the field before joining the party politics. She was also part of the Friedrich A. von Hayek Society of Germany, a group that defends the ideas of the economist who was one of the forerunners of neoliberalism.

Lutz Graf von Krosigk in the dock in 1949 in Nuremberg. Sentenced to 10 years in prison, he was granted an amnesty and released in 1951. / Robert Kempner/US Holocaust Museum

Von Storch says on his official website that he seeks inspiration in the movements in support of Ronald Reagan, president of the United States between 1981 and 1989, and in the Tea Party, the most recent radical wing of the Republican Party, also in the United States. She says she is “concerned” about Germany and Europe because of “mass migration” and “political Islam”. The deputy also claims to be an advocate of “strong families and secure borders.”

Know more: The end of an era: Trump leaves a legacy of chaos when leaving the US presidency

In 2018, the parliamentarian criticized on her Twitter the decision of the Cologne Department Police to publish a New Year’s message in Arabic, in addition to other messages in English, French and Persian.

“What the hell is wrong with this country? Why does the official NRW police page tweet in Arabic,” wrote von Storch. “Do they intend to appease the hordes of barbarians, Muslims and mass rapists in this way?”

The parliamentarian’s account was suspended for 12 hours after publication.

In 2016, von Storch stated on his Facebook that women and children should be prevented with firearms from entering Germany in case of emergencies. Faced with the negative repercussions, the AfD parliamentarian stated that the use of lethal force would only be for women.

Know more: death as a commodity

What are Alternative’s flags for Germany and its electoral size?

Created in 2013 as a party critical of the European Union and the Euro (the only currency among its members), Alternative to Germany has gradually adopted criticisms against refugees and immigrants, especially Muslims, as well as opposing same-sex marriage and take a denial stance on climate change.

The AfD also defends a denial stance on the covid-19 pandemic, with attacks against the social isolation measures adopted by Chancellor Angela Merkel, having proximity to figures that attack vaccination.

In its first election, in the year of its founding, the party was below the barrier clause and did not get any seats in the Bundestag. Already in 2014, the AfD made seven deputies in the European Parliament. In 2017, however, the association changed its importance when it managed to elect 94 delegates to the Bundestag and thus become the main party in opposition to Merkel. 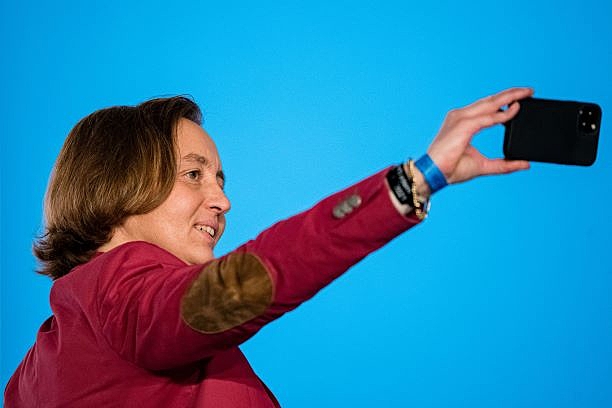 The professor of the International Relations course at ESPM-SP, Denilde Holzhacker, assesses that the president of the Chamber of Deputies, Arthur Lira (PP-AL), and the political parties aligned with Bolsonaro, connived with extremism by not repudiating the agenda of von Storch in Brazil.

“Both Eduardo Bolsonaro and Bia Kicis have been approaching leaders of the far right, it is not the first movement they have made. They had already made it with representatives of the USA, in contact with groups there, and also with European groups. It seems that it is the same strategy, to strengthen and be part of this network of parties and politicians”, says Holzhacker.

Professor of International Relations at the Federal University of ABC (UFABC) Gilberto Maringoni says that Bolsonaro’s agenda with the extremist is “scandalous” and cannot be seen naturally.

“Brazil is the spearhead of the articulation of the international extreme right. It is not Hungary, given the weight the country has in the world, as it is a European country on the periphery, a country without the geopolitical importance of Brazil”, analyzes the professor at UFABC.

::Putting an end to the Bolsonaro government “is a civilizing task”, says Randolfe Rodrigues to the MST

Maringoni considers that the meeting exposed the president’s role in world geopolitics. “Bolsonaro becomes the main articulator of the world’s extreme right. There is no other head of state, in any other country in the world, where the extreme right has the weight it has in Brazil”, says the professor at UFABC.

O Brazil in fact he contacted Eduardo Bolsonaro’s office by e-mail and forwarded questions about the meeting with von Storch, but received no response until this article was published. Bia Kicis’ office said that the congresswoman “will not speak”. The Special Secretariat for Social Communication (SECOM) of the Federal Government was also contacted by telephone, but also did not respond.

*With information from Deutsche Welle.