Fertilizer company Copebras, a subsidiary of China’s CMOC, has promised its investors not to import any more phosphate stolen from Western Sahara. The information was obtained and disclosed this Thursday (14) on the website of the Western Sahara Resource Observatory (WSRW), which twice mentions the denunciation published by Brasil de Fato in January.

At the time, Copebras did not respond to the report’s questions. The other importing companies denied having brought the raw material for fertilizers from Western Sahara – despite the evidence raised by the boF with WSRW.

The novelty of this farm is that the Observatory had access to information and internal testimonies in which the CMOC admits that purchase, as an “isolated case”, and promises to be diligent in inspecting the place of origin of the phosphate rocks.

“WSRW is in contact with three of the owners of China Molybdenum [CMOC] who received this same information from the company’s investor relations department. The company stopped shopping”, says the text published on the Observatory’s portal.

“We contacted the company to find out more about the incident. We had a good dialogue with the company, which guarantees that it was a unique incident and that they will monitor the topic closely. The company has clarified that it will not buy more phosphates without having carried out extensive due diligence,” Kiran Aziz, KLP Asset Management senior analyst and CMOC investor in Norway, told WSRW.

“A CMOC investor in another country received the answer that there will be no more imports”, completes the text of the Observatory.

Where does the problem live?

Western Sahara is the last African colony, according to the United Nations Special Committee on Decolonization. Spain, a metropolis until 1976, abandoned the territory without decolonizing it, establishing an illegal tripartite agreement with Morocco (northern neighbor) and Mauritania (southern neighbor), dividing the area and guaranteeing a percentage of the export of natural resources.

With no expansionist pretensions, Mauritania then retreated and left the territory in charge of Moroccan forces. The promise of a plebiscite mediated by the United Nations (UN), to ensure the self-determination of the Sahrawi people, was never fulfilled.

“The Sahara is rich in various metals, natural gas, iron, copper, uranium and tellurium. There are also unexplored oil reserves, sand for cement production and for widening beaches, as well as one of the most abundant fishing areas in Africa”, he emphasizes. 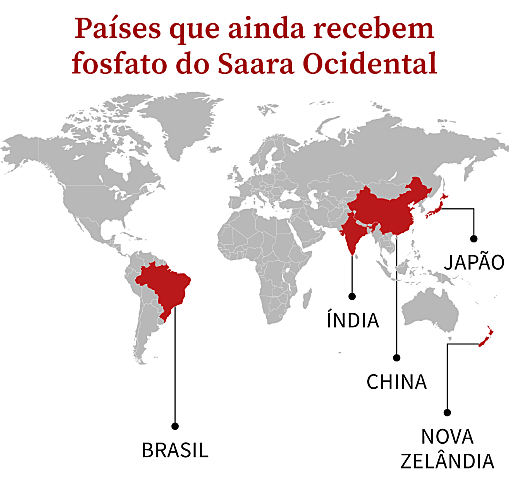 The occupation of the territory and the exploitation of Saharawi phosphate by Morocco violates Resolution 1514 of the United Nations (UN), according to which peoples can, for their own purposes, dispose of their wealth and natural resources, based on the principle of mutual benefit and international law.

“All armed action and all repressive measures directed against dependent peoples will be ended, to allow these peoples to peacefully and freely exercise their right to complete independence, and the integrity of their national territory will be respected”, says the text .

In other words, no government is authorized to extract and commercialize foreign resources from territories in the process of decolonization. This is the case of Western Sahara and 16 other territories considered “non-autonomous” by the UN.

There is no document, from any court or international organization, that allows Morocco to exploit the resources of that region of the planet, as it happens to this day.

The population of Western Sahara is estimated at 650,000 people, divided into four groups. In addition to those living in exile and in the occupied territories, around 170,000 Sahrawis live in refugee camps in another neighboring country, Algeria.

The violence committed against Sahrawis in the occupied territories is described in reports by the UN Human Rights Committee and involves, for example, allegations of torture and arbitrary arrests, as well as restrictions on freedom of expression.

A decision by the Court of Justice of the European Union on September 29, 2021 confirmed that the right of the Sahrawi people to consent is a prerequisite for the legality of any deal involving their resources.

Phosphate fertilizers are products derived from the extraction, grinding and treatment of rocks that have a significant concentration of phosphorus. The application allows the plant to access a volume of nutrients greater than what the soil is capable of providing, increasing crop yields.

Morocco and the illegally occupied Western Sahara territory are home to the largest phosphorus reserves in the world.