Workers from Guarulhos (SP) are about to achieve an unprecedented feat in Brazil: the holding of a popular municipal referendum.

There were eight months of mobilization against the closure of the public company Proguaru, specialized in urban cleaning services, building works and infrastructure.

Law 7879, of December 2020, authorized the extinction of Proguaru alleging that the company would cause financial losses to the municipality.

The company’s workers’ committee reacted and started collecting signatures from the population. According to Article 36 of the Organic Law of the Municipality of Guarulhos, “the laws and amendments to the Organic Law are obligatorily submitted to a popular referendum within 01 (one) year after its enactment, when required by 1% (one percent) of the electorate ”.

In other words, it would be necessary to gather around 10,000 signatures to officially request the referendum, pursuant to Law 9,709 of the Federal Constitution.

The goal was surpassed in early August. When the list of signatures was delivered to the City Council last week, there were already 14,730.

The mayor, Fausto Martello (PDT), had one month to submit the request to the Regional Electoral Court (TRE), but he did so in less than two days, last Thursday (12).

The protocol entered the TRE system the next day. The referendum must be held within 60 days of confirmation by the electoral body.

Representative of the workers’ commission, Raul Nascimento affirms that the collection of signatures to call the referendum is a response to the representativeness crisis that the country is experiencing.

He compares the efforts of the residents of Guarulhos to the movements that resulted in the convening of a national referendum in Chile, in 2020, to “bury” the Constitution of the dictatorship of Augusto Pinochet.

“It is a tactic of reaction to neoliberalism, similar to what happened in Chile”, he says. “The mechanism of the popular referendum goes along this line. Can you imagine if the population of Guarulhos gets excited and starts calling others?”

Popular movements and even sectors of the Catholic Church were involved in the collection of signatures, which made it possible to expand membership. 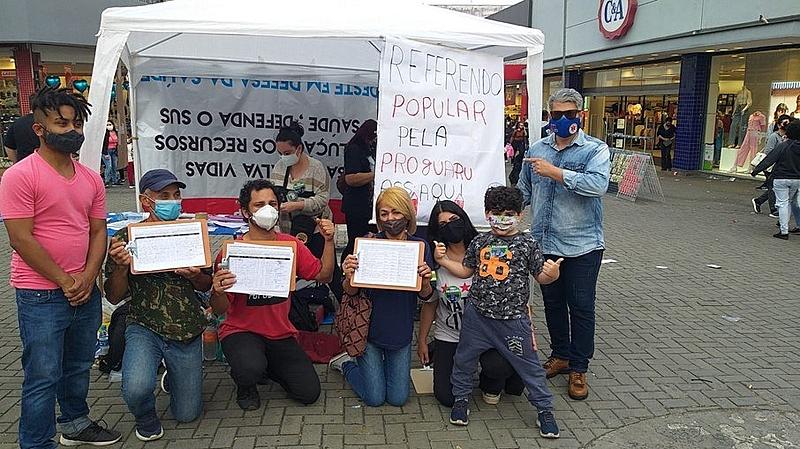 “It’s as if we were seeing a shift in hegemony in the city. Until then, we have the domain of a more provincial group, and perhaps a shift to a more popular field is taking place”, projects Nascimento.

The worker emphasizes the importance of Proguaru for the city, in a context of rising unemployment in the country. According to data from the Brazilian Institute of Geography and Statistics (IBGE), Brazil surpassed 14.8 million unemployed in July.

“This company is the gateway for low-income people [no mercado de trabalho], the sweepers. And there is no distinction of creed, race, gender”, he praises.

“It is the largest employer in the city, with almost 5,000 workers. It’s a lot of people. Everywhere you go, someone works there.”

Nascimento emphasizes that the mobilization took place in the midst of the covid-19 pandemic, and makes an analogy with the famous phrase by then Minister Ricardo Salles, of the Environment, during a ministerial meeting in 2020.

“Salles said he wanted to take advantage of the pandemic to pass the herd. We took the opportunity to close the gate”, he concludes.