About 300 demonstrations in Brazil and 17 other countries against President Jair Bolsonaro (no party) took place this Saturday (2). Acts were registered in all capitals of Brazil and in other countries such as Germany, France, Portugal and England, according to the organizers of the “Outside, Bolsonaro” Campaign. Bolsonaro’s impeachment, hunger, unemployment and vaccination against covid-19 were the main issues raised by the protesters.

::Brasilia: protesters march to Congress asking Bolsonaro to “pay for his crimes”::

Some political leaders, such as Gleisi Hoffmann, national president of the Workers’ Party (PT), and Guilherme Boulos (PSOL), coordinator of the Frente Povo Sem Fedo, believe that they were the largest demonstrations this year.

The acts are “being quite broad”, stated Boulos in an interview with TVT, adding: “We are going to have a political representation today in the act on Avenida Paulista [em São Paulo] more significant than any other act, and I hope this signals a commitment between the parties to have unity around the impeachment demand, the defense of democracy and against Bolsonaro”.

At the demonstration in São Paulo, parties such as the PDT and the PSDB joined left-wing parties, trade union centrals and popular movements. Political figures, up until then far removed from the protests called by sectors of the left, also attended the event, such as Ciro Gomes (PDT) and Paulinho da Força (Solidariedade).

Demonstration in Brasília (DF) marched to the National Congress/Scarlett Rocha

For Boulos, in fact, “there is a lot of difference” in terms of the political program, but he has “no doubt” that “in view of the democratic risk that we live in the country, in view of the tragedy that represents Bolsonaro, our differences are less than the common goal of defeating him”. The coordinator of the Frente Povo Sem Fear stated that he hopes the union will be a “first step” towards a political front for impeachment and in defense of democracy.

“I hope that these parties maintain the consequence around this project and not only are in the act, but also put themselves with their benches in the national Congress in defense of impeachment”, said Boulos.

Along the same lines, Hoffmann told TVT that “parties that weren’t in the squad are in this one and this will certainly give them strength. Unity is a construction process, and this unity will obviously be reflected in the streets, but also in political pressure”. The PT member also said that she hopes that on November 15, when there will be new demonstrations, she will also have this union. “I hope we can expand it even more.”

::In Rio, a demonstration shows the expansion of political forces against the government of Jair Bolsonaro::

“In the bone line”

One of the themes most raised by the protester was hunger, recalled on the posters. This week, the cover of the newspaper Extra shocked the Brazilian population by bringing the scene of a man searching for pieces of meat and bones inside a truck full of carcasses, rejected by butchers.

The image represents Brazil very well, which, with unemployment and the rise in the price of food, fuel and cooking gas, puts the population on the brink of the abyss of hunger. 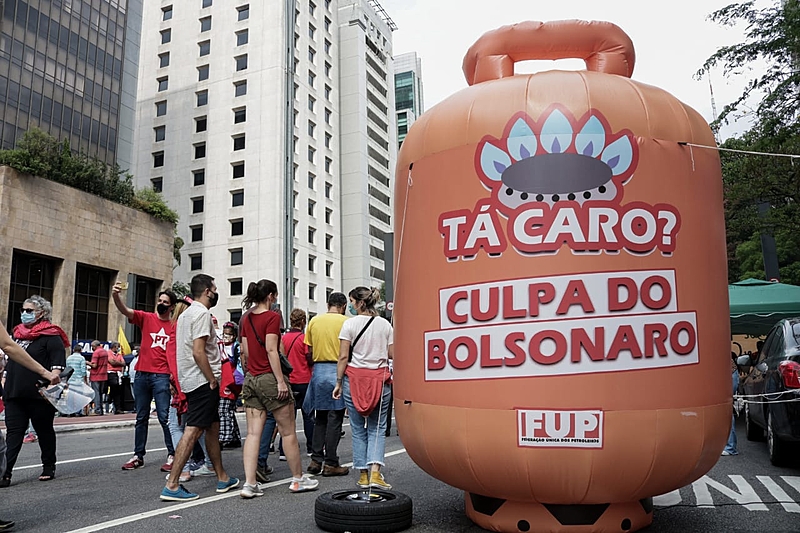 Since the beginning of the pandemic until August, the price of food has increased 15% in the country, according to the Brazilian Institute of Geography and Statistics (IBGE). The rate is almost triple the general inflation registered in the same period, 5.2%.

For Boulos, it is “evident” to all Brazilians that “we can’t wait” for the 2022 presidential elections to defeat Bolsonaro. “Brazil can’t stand another 500 days of Bolsonaro. The bone line is increasing, 19 million people are hungry, we are going to reach 600 thousand victims of a pandemic”.

::Sculpture made of bones denounces the Brazilian president’s genocidal posture in Paris::

For the coordinator of People Without Fear, the demonstration is also “essential” to respond to the “coup movement that Bolsonaro organized on September 7th”. “An answer is needed from the streets and it is being given on the 2nd.”

In the words of José Carlos Dias, former justice minister in the government of Fernando Henrique Cardoso, Brazil is “in mourning”, but the population is going to “fight”. Dias believes that this “is a moment of hope in which we want to drive away this delinquent who is presiding over the country and sinking it into the abyss.”

When observing the demonstrations, Dias affirms that it is also a movement of hope. “I, at age 82, and all these people are living in hope. It’s a day of hope. It is civil society that has to demand from Congress the way to free us from this situation.”

Another recurring agenda among the protesters was the immunization of the Brazilian population against covid-19. Posters with charges to speed up vaccination and recalling all the preventable deaths that occurred due to the federal government’s denial were present in the hands of the population that went to the protests.

In this regard, there was also a consistent defense by Covid’s Parliamentary Inquiry Commission (CPI). For João Pedro Stedile, coordinator of the MST, the broad representation of today’s demonstrations will also support the report that will be presented by senator Renan Calheiros (MSB-AL) with the committee’s conclusions and referrals. Posters with charges to Arthur Lira, president of the Chamber, were also common / Guilherme Gandolfi

“Since Lira is Bolsonaro’s ally in exchange for I don’t know what favors, at least the CPI can unleash some legal proceedings that at least interdict the president for all the crimes he has already committed,” Stedile told TVT. 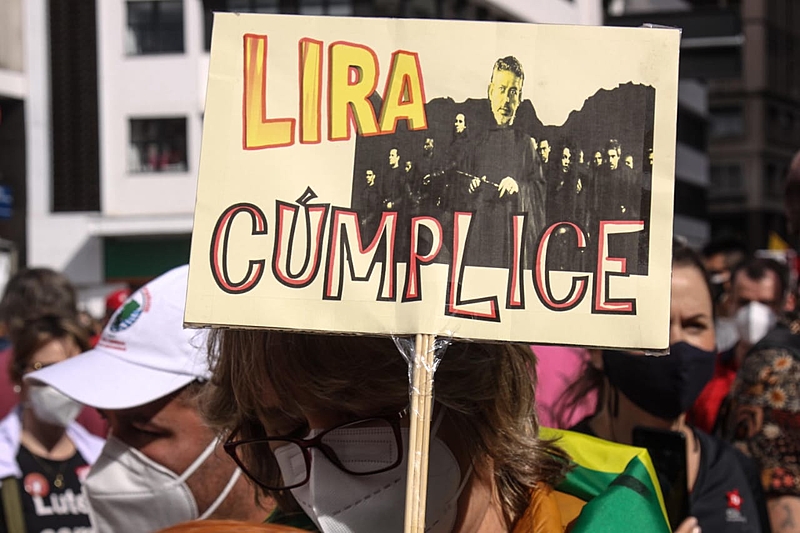 Running over in Recife

So far, an occurrence has been registered in Recife (PE), where a young woman was run over and dragged by a car for 100 meters. According to the demonstrator Leonardo França, the young woman was on the committee of the organization that was trying to establish a dialogue between the drivers and the demonstrators, when a man broke the blockade and advanced on the people.

“He dragged, everyone asked to stop, but he didn’t. He ran over 100 meters with the girl hanging from the car. He braked, the girl fell and he went over”, he says. The victim was injured and was referred to the Real Hospital Português.

::Driver runs over and drags a protester for 100 meters in an act against Bolsonaro in Recife (PE)::