The fire that hit a shed at the Cinemateca Brasileira in Vila Leopoldina, west of São Paulo, in the early evening of Thursday (29), occurred a little over a year after the resignation of Regina Duarte from the command of the Special Secretariat for Culture .

In May 2020, along with the actress, president Jair Bolsonaro announced his departure from the secretariat and announced that she would start working at the Cinemateca Brasileira to “be closer to her family”, according to the president.

“Go to Cinemateca, next to your apartment, there in São Paulo, if you’re going to be happy and produce much more, I’m happy with that. Upset because you’re a little away from our life in Brasília,” stated Bolsonaro, in occasion.

:: What is lost with the abandonment of the Cinemateca Brasileira? ::

Outside the Special Secretariat for Culture, from which she was only dismissed on June 10 through a presidential decree – 20 days after the video recorded alongside the president in which she announced her departure – Regina Duarte was never appointed to public office promised by the president.

The first hurdle for the nomination was that the position ceased to exist in 2018, when former president Michel Temer (MDB), granted the management of TV Escola to the social organization Associação de Comunicação Educativa Roquette Pinto. In an amendment to the contract, it also became responsible for managing the Cinemateca, managing the budget coming from the federal government.

Former Education Minister Abraham Weintraub terminated the contract with Roquette Pinto to manage TV Escola, in December last year, and thus the Cinemateca’s management was also invalidated. So far, however, the federal government has not taken over the administration of the institution either, leaving Cinemateca in a situation of abandonment.

The link would go on until 2021, but according to the Federal Public Ministry (MPF), the decision was taken by the former minister of Bolsonaro “unilaterally and without legally admissible reason”.

The situation led the MPF to file a public civil action in which it points out “intentional abandonment” by the Union and foresees the application of the budget foreseen for this year, in the amount of R$ 12.2 million, immediately to guarantee the preservation of space.

Author of the petition, Federal Attorney Gustavo Torres Soares states that it is “extremely likely that the only reason for the Ministry of Education to oppose the federal technical bodies themselves would be ideological resistance, at the expense of the deterioration of the material held by Cinemateca and the growing risk of its destruction”.

With the contract overturned, the Cinemateca’s management was also invalidated. Roquette Pinto, however, continued to fund the institution’s maintenance. In June, the organization’s presidency sent a letter to the Ministry of Education charging a debt of R$ 13 million.

Without the federal government acting to maintain the Cinemateca, the MPF’s action also asks that the contract with Roquette Pinto be renewed for the year 2020 on an emergency basis. During this period, the Union is prevented from suspending the partnership, unless it has authorization from the Court to do so.

The attorney also requires the permanence of the technical staff that already makes up the institution, as well as the restructuring of the Cinemateca’s Advisory Board.

“The possibility of self-combustion of cellulose nitrate films, and the consequent risk of fire, often receive more attention from the media and the public. The institution has faced four fires in its 74 years, the last in 2016, with the destruction of approximately 500 works. The risk of a new fire is real,” warned the institution’s workers in April this year.

The collection consists of 250,000 rolls of films, some of which are made of cellulose nitrate, which can self-combust if refrigerated conditions are not maintained.]

This warning has been made by the institution’s workers since 2020, but no action was taken by the Department of Culture in the government of Jair Bolsonaro (no party).

“There is no contracted technical body, the collection remains unattended and there is no information about its conditions. For this reason, we are launching an alert about the risks that the institution’s collection, equipment, databases and construction run on”, says the letter addressed to the current Special Secretary for Culture, Mario Frias. There was no response.

Members of the SOS Cinemateca movement also attended the demonstration on Avenida Paulista last Saturday (24) to warn of the increasingly imminent risks of fire. 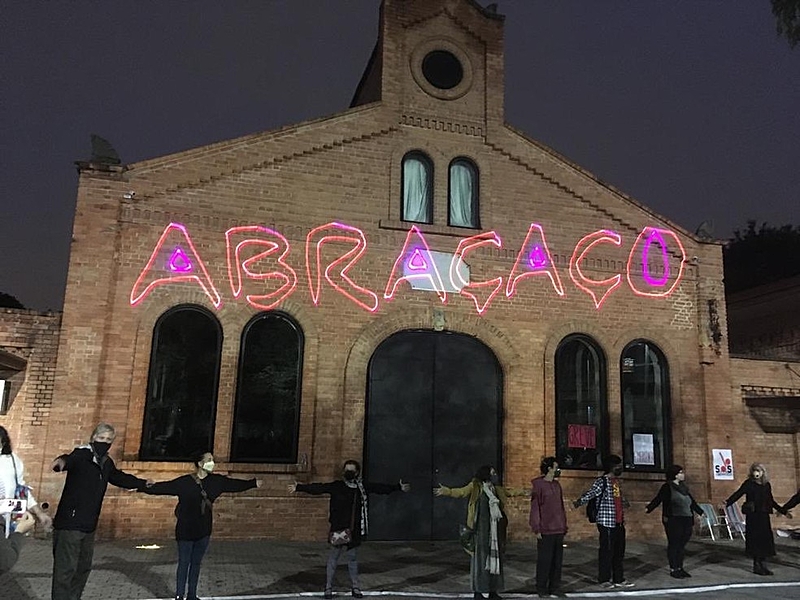 The situation of the main body for the preservation of Brazilian audiovisual memory generated mobilizations for its preservation, in the last week before closing, in front of the headquarters of the Cinemateca Brasileira, in Vila Mariana in São Paulo (SP).

The SOS Cinemateca movements, created by the São Paulo Association of Filmmakers (APACI), the Cinemateca Acesa: Frente Ampla Cinemateca Viva and Mariana em Movimento held a demonstration in São Paulo with a symbolic embrace at the headquarters of the federal institution in the south of São Paulo. .

The mobilization was also accompanied by a manifesto on video with the participation of artists linked to the audiovisual who ask for the preservation of the space. Antonio Pitanga, Bárbara Paz, Alessandra Negrini, Marina Person, Fernando Meirelles, João Miguel, Marcelo Machado, Tata Amaral and Fernando Alves Pinto are among the artists participating in the manifesto. Watch:

In a note sent to the press this Thursday night (29), the Special Secretariat for Culture says that it “deeply regrets and is closely following the fire that affects a warehouse at the Cinemateca Brasileira, in São Paulo (SP)”. The secretariat also states that “the entire air conditioning system in the space underwent maintenance about a month ago”.

“The Secretariat has already requested support from the Federal Police to investigate the causes of the fire and only after its full control by the Fire Department that operates at the site will it be able to determine the impact and the necessary actions for an eventual recovery of the collection and, also, of the space. Finally, the federal government, through the secretariat, reaffirms its commitment to space and the maintenance of its history,” says the text.